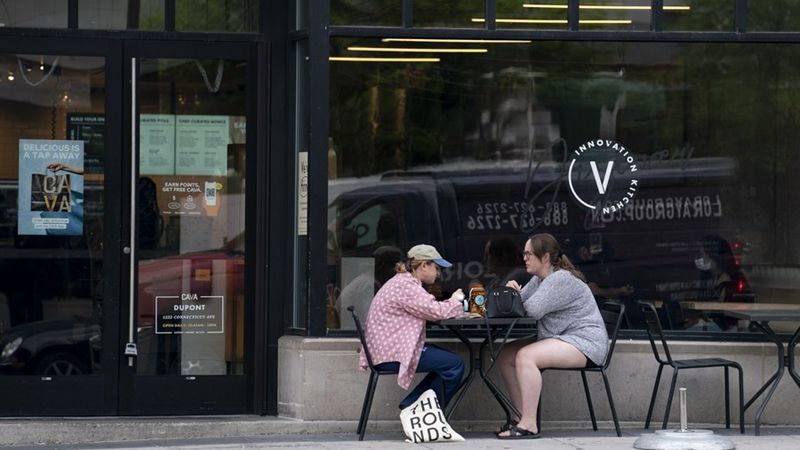 People spend time outside a restaurant in Washington, DC, the United States, on May 11, 2022. [Photo/Xinhua]

While the White House and its political adversaries debate whether the US economy is in a recession, there now have been two straight quarters of negative GDP amid rising inflation.

By some definitions, that combination is called stagflation, although US unemployment is low, which is a bright spot amid the recent dour economic news.

According to investopedia.com, "stagflation is characterized by slow economic growth and relatively high unemployment … which is at the same time accompanied by rising prices (i.e., inflation). Stagflation can be alternatively defined as a period of inflation combined with a decline in the gross domestic product (GDP)."

Stagflation was first recognized during the 1970s, when many developed economies sustained rapid inflation and high unemployment due to an oil shock, according to Investopedia.

On Thursday, a day after the Federal Reserve raised interest rates by three-quarters of a percentage point (0.75) to a range of 2.25-2.50 percent in an effort to slow growth and ease pricing pressures, the Commerce Department reported that GDP fell by 0.9 percent in the second quarter, after a 1.6 percent retraction in the first quarter.

"Call it a recession or stagflation or a slowdown or a transitory blip or even Ethel or Fred — however you name it, the US economy described in Thursday's GDP report for the second quarter is struggling. That's distressing for the American families and businesses living through it, and a political liability for the Democrats presiding over it. No wonder they want to pretend it's not happening," The Wall Street Journal Editorial Board wrote Thursday.

"President Biden inherited a growing economy primed to roar back from the pandemic, and in barely a year and a half has dragged America back to the 1970s. The best word for what we have now is stagflation, the ugly combination of slow growth and rapidly rising prices," the Journal continued. "This is what the policy mix of trillions in federal spending, heavy regulation, the threat of higher taxes and easy money has wrought. Time to do the opposite."

"Most economists and most Americans have a similar definition of recession — substantial job losses and mass layoffs, businesses shutting down, private-sector activity slowing considerably, family budgets under immense strain," she said at a news conference.

"In sum, a broad-based weakening of our economy. That is not what we're seeing right now when you look at the economy," she added. "Job creation is continuing; household finances remain strong. Consumers are spending, and businesses are growing."

US President Joe Biden, in a statement on the GDP report, said, "Our job market remains historically strong, with unemployment at 3.6 percent and more than 1 million jobs created in the second quarter alone."

Consumer spending, accounting for roughly two-thirds of the American economy, slowed to a 1 percent annualized growth rate in the second quarter, from a 1.8 percent pace in the first, the GDP report showed.

The slowing growth was driven by a 4.4 percent drop in spending on goods, which had soared during the COVID-19 pandemic, and a closer look suggests that much of that was due to elevated inflation rather than higher borrowing costs.

Consumers spent nearly $6 billion more on food for consumption at home than in the first quarter but walked out of supermarkets with less of it. Adjusted for inflation, food consumption fell $33.5 billion, resulting in food having its largest drag on the economy in nearly 50 years.

It's not clear how long that will last though, said Rubeela Farooqi of High Frequency Economics.

"The question really is ... what is the staying power of service spending? The Fed is really hiking into a slowdown ... (it's) in a tough spot," Farooqi said, positing that households will soon begin to exhaust their savings and take on more credit card debt.

"The economy is clearly losing momentum," wrote JP Morgan's Michael Feroli. "At least the Fed has something to show for its rate hikes."

Wall Street shrugged off the GDP report, as the Dow Jones Industrial Average, the Nasdaq Composite and the S&P 500 each finished higher by 1 percent on Thursday,

The report reflected a slowing of inventory accumulation and a boost to growth from trade, both of which analysts said at least partially reflected pandemic-disrupted supply chains.

"(The inventories drag) tells you that corporations are very concerned and are pulling back on their spending. That's part of a recession atmosphere," said Peter Cardillo, chief market economist at Spartan Capital Securities.

However, former US treasury secretary Lawrence Summers said on Twitter, "Growth is only negative because of inventory decumulation, which in part reflects strength," although he added that spending growth "will have to slow way down if inflation is to approach target levels".

Inflation as measured by the core personal consumption expenditures price index, compiled by the Commerce Department's Bureau of Economic Analysis — which the Fed follows closely because it excludes more volatile components like food and energy — fell to 4.4 percent in the second quarter from 5.2 percent in the first. That is still much higher than the Fed's 2 percent goal for inflation.

The consumer price index produced by the Labor Department's Bureau of Labor Statistics was up 9.1 percent in June year over year.