A woman has been charged after a "complex" investigation into an Australian strawberry scare where needles were found stuck into the fruit, police said Sunday, in a crisis that sparked nationwide panic. 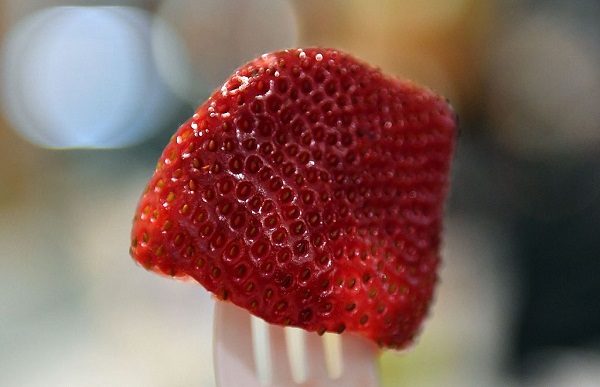 This photo illustration shows a strawberry on a fork at a restaurant in Sydney on September 19, 2018. (File Photo: VCG)

Queensland state authorities offered a large reward and the national government raised jail terms for such crimes after sewing needles were found in plastic boxes of the fruit sold in supermarkets in September.

Since the first case came to light when a man was taken to hospital with stomach pains after consuming strawberries, more than 100 alleged incidents of pins and needles found in fruit, mostly strawberries, were reported in September around the country. One incident was also reported in New Zealand.

Police said a 50-year-old woman was arrested and charged on Sunday with seven counts of contaminating goods "following a complex... and extensive investigation."

"This is a major and unprecedented police investigation with a lot of complexities involved," Detective Superintendent Jon Wacker said in a statement.

"The Queensland Police Service has allocated a significant amount of resources to ensure those responsible are brought to justice."

She faces up to 10 years' imprisonment and is due in a Brisbane court on Monday. Police did not reveal the reasons and motives behind her alleged involvement.

The sabotage crisis led supermarkets to pull the fruit from the shelves and saw farmers dump tons of the unwanted berry. The government raised the maximum prison sentence for fruit tampering from 10 to 15 years.

Queensland Strawberry Growers Association spokeswoman Jennifer Rowling welcomed the news and said the crisis had a "crippling impact" on the state's strawberry growers.

"However, it is disconcerting that the charges relate to only six or seven punnets (plastic boxes) of strawberries, proving that the majority of... incidents were copycats or false reports," she said.