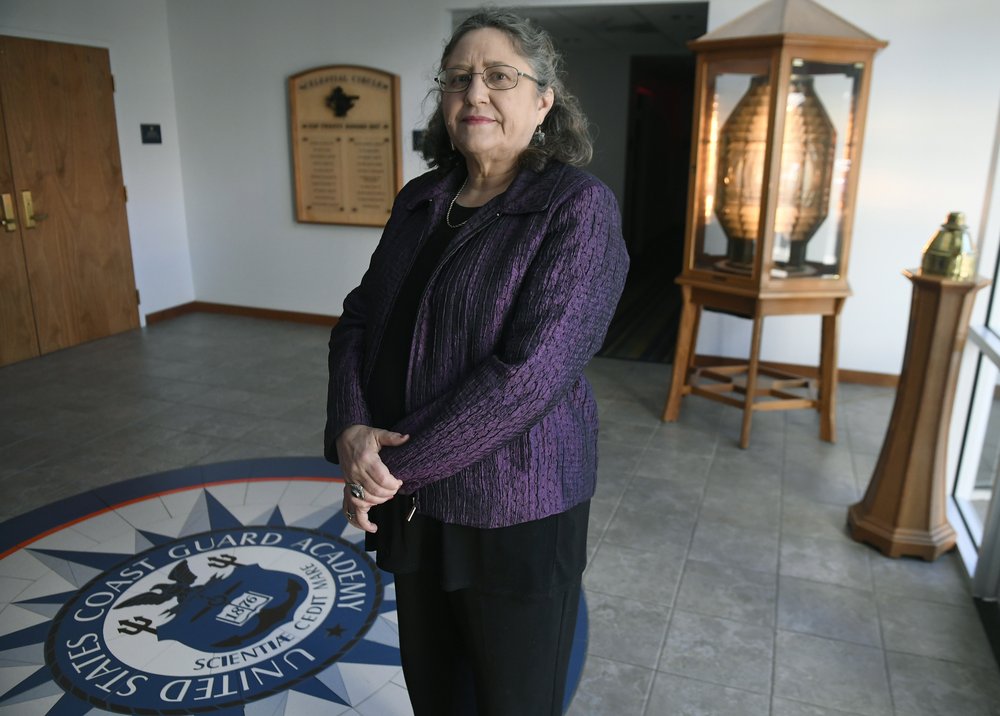 In this Tuesday, Dec. 18, 2018 photo, Michele Fitzpatrick, a retired lieutenant commander in the Coast Guard, poses for a photograph at the United States Coast Guard Academy in New London, Conn. (Photo: AP)

It had been months since retired Lt. Cmdr. Michele Fitzpatrick paid attention to news coverage. She was turned off by President Donald Trump’s tweetstorms and attacks on critics such as the late Republican Sen. John McCain, a war hero. But as the November midterm elections approached, she fired up her laptop.

A member of the US Coast Guard Academy’s Class of 1980, the first to include women, Fitzpatrick began researching candidates and poring over issues. On Election Day, she voted without hesitation: all Democrat.

“I just don’t think what’s happening now is helpful,” Fitzpatrick, of Groton, Connecticut, said in a telephone interview, pointing to the negative discourse in Washington. “It’s almost like watching kids and bullies on the playground instead of people actually doing something about helping this country to survive and to thrive.”

That’s hardly a startling view from a Democrat these days. But from a military vet?

Long seen as a bastion of support for Republicans, the face of the US military and its veterans is changing — and perhaps too is their political bent.

Veterans by and large did vote for GOP candidates on Nov. 6, affirming Trump’s frequent claim that they stand among his strongest backers. But more women are joining the military, and they are bucking the pattern, according to data from AP VoteCast.

The 60-year-old Fitzpatrick recalls suppressing her opinions as a young “hardcore Democrat” in an overwhelmingly Republican military but finding other ways to promote change, such as supporting other female cadets.

Now, women in the military are helping elect new Democratic lawmakers and spur discussion on once little-mentioned topics such as sexual harassment and women in combat roles. As political candidates, female veterans also had a breakout performance in the midterms, sometimes campaigning as a foil to Trump: empathetic and competent on issues such as health care while also trustworthy on military and defense, typically a GOP strength.

“I see this as a beginning edge of a larger movement,” said Jeremy Teigen, professor of political science at Ramapo College and author of “Why Veterans Run: Military Service in American Presidential Elections, 1789-2016.”

Both current and former female service members were more likely to vote in the 2018 midterm elections for Democrats than Republicans, 60 percent to 36 percent, according to the data from VoteCast. Men with military backgrounds voted Republican by roughly the same margin, 58 percent to 39 percent.

A record number of female veterans — four — were elected to the House, all Democrats. Three won in political swing districts, helping give the party control of the chamber next year.

Democratic Rep.-elect Chrissy Houlahan, a former Air Force captain, said she was motivated to run after organizing a bus trip last year to the Women’s March in Washington. She felt her election would serve as a repudiation of Trump, but she avoided sharp rhetoric in favor of a message of service to country and getting things done.

She recalled Pennsylvania voters telling her they were exhausted by gridlock and partisan attacks and “would like our nation and our democracy and our values to stabilize to what we can recognize.”

All told, 55 percent of voters who had served in the military backed Republican candidates in the elections, compared to 42 percent who supported Democrats, according to VoteCast data.

Trump frequently embraces the US military and veterans in speeches, referring to “my military,” though he has also insulted war heroes such as McCain and military families who criticize him. “I think the vets, maybe more than anybody else, appreciate what we are doing for them,” Trump said last month.

Not the female veterans, though. Their margin of support for Democrats was comparable to that of women overall, according to VoteCast data.

AP VoteCast is a nationwide survey of more than 115,000 midterm voters — including more than 4,000 current and former service members — conducted for The Associated Press by NORC at the University of Chicago.

Laura Cavallaro, 35, who served on active duty in the Marine Corps from 2001 to 2005 and on inactive duty until 2009, says she’s never voted but thinks she will in 2020. A recent graduate of Rhode Island College, she said she believes Trump has kept his promises about helping the economy and creating jobs. At the same time, “Who knows if he’s going to say something to the wrong person and start another war?” she said. That’s particularly concerning for military veterans who know what’s at stake in combat.

When Cavallaro joined the military, she considered herself a Republican because her parents were. Now, she sees herself more as an independent, saying she’s pro-gun rights and pro-gay rights.

“I think being in the military kind of opened my eyes to a lot more things,” she said. “If I had stayed in Rhode Island, I wouldn’t have met so many different personalities and people with other political views.”

In 2016, the Defense Department lifted all restrictions on the roles women can perform in the military, spurring broader debate about combat missions and even whether women should be eligible for the draft.

Currently, there are more than 20 million veterans of the US armed forces, about 10 percent of them female, the fastest growing subgroup. In the US military forces, 16.6 percent of those enlisted are women, up from about 2 percent in 1973.

Teigen, who studies military voting, said that in the context of the #MeToo movement against sexual harassment, female veterans running for office provided a contrast for voters, “someone who was willing to volunteer to take time out of their youth to serve their country and stand up for others,” compared to Trump, a New York billionaire with five wartime draft deferments and a fraught history with women. Of the military veterans who ran for the House, 12 were women, the highest number ever.

Houlahan will serve her first House term starting in January, along with former Navy pilot Mikie Sherrill, D-NJ, and Navy veteran Elaine Luria, D-Va., who defeated another veteran, Republican Rep. Scott Taylor, a former Navy SEAL. The women prevailed in tight races by tying their opponents to Trump and the GOP congressional majority while pledging to work on both sides of the aisle. All had stories about being among the only women working among men and used their platforms to speak out about abuses in the military.

Rep. Tulsi Gabbard, D-Hawaii, a frequent Trump critic, also won re-election. She is a member of her state’s National Guard.

In all, seven female veterans will serve in the next Congress, up from four. The veterans in the House will join Sens. Tammy Duckworth, D-Ill, a former US Army helicopter pilot, and Joni Ernst, R-Iowa, a combat veteran in the Iowa Army National Guard. Rep. Martha McSally, R-Ariz, a retired Air Force colonel, lost her Senate bid but was later appointed by Arizona’s governor to replace Sen. Jon Kyl in the seat that belonged to McCain.

“I sure hope I get to make history,” Houlahan said cautiously, when asked about her candidacy and the influence female veterans could have on Washington. “That would be amazing. And I would be happy to serve everybody, not just the women and the Democrats.”