Women rescued by Navy defend their account of ordeal at sea 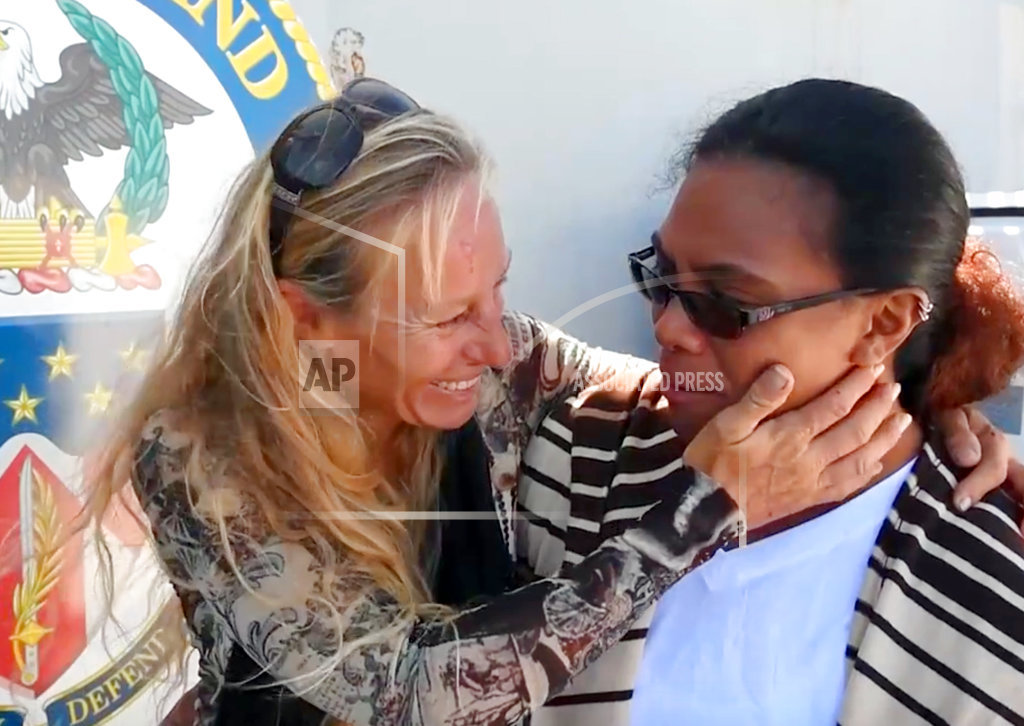 Navy, Jennifer Appel and Tasha Fuiava, who with their dogs were rescued after being lost at sea for several months while trying to sail from Hawaii to Tahiti this Oct. 25. Photo：AP

Two women from Hawaii who were rescued after being lost at sea defended their account of the ordeal, insisting that a storm was whipping up 30-foot (9-meter) waves and near hurricane-force winds on the night they set sail, despite records that show no severe weather in the area at the time.

The Coast Guard is reviewing records from the days after Jennifer Appel and Tasha Fuiava put to sea in a 50-foot (15-meter) sailboat, but NASA satellite images for the days around their departure show no organized storms in the region where they planned to travel.

There was a tropical cyclone, but it was near Fiji, thousands of miles west of Hawaii. Localized squalls are known to pop up, but a storm lasting three days would have been visible on satellite and would have elicited mass warnings to the public to brace for the weather.

"We got into a Force 11 storm, and it lasted for two nights and three days," Appel said Tuesday.

Coast Guard officials told The Associated Press on Monday that the two women had an emergency beacon but never turned it on because they did not fear for their lives. If they had, rescuers would have been headed their way in a matter of minutes.

The woman "stated they never felt like they were truly in distress, like in a 24-hour period they were going to die," Coast Guard spokeswoman Petty Officer 2nd Class Tara Molle said Monday.

The women said Tuesday that they did not use the beacon because they never felt they were in immediate danger, yet they have been quoted as saying they did not think they would survive another day, and that they were fearful during a dramatic tiger shark attack that lasted for six hours. Furthermore, the pair said they had been flagging vessels and sending distress signals for at least 98 days.

"We knew we weren't going to make it," Appel said. "So that's when we started making distress calls."

The Coast Guard outlined other inconsistencies, most notably on the timing of events.

Appel's mother, Joyce, told the AP that she called the Coast Guard to report her daughter missing a week and a half after they departed for what they believed would be an 18-day trip to Tahiti.

However, the Coast Guard never got a call from the elder Appel. They received a call from a "family friend" they identified as a male on May 19, still several days before the women expected to arrive.

They also defended their claims that their boat would not fit into harbors on some Hawaiian islands, places where much larger vessels come and go regularly.

Their description of 20- to 30-foot (6- to 9-meter) tiger sharks ramming their boat in a coordinated attack for more than six hours could simply be misperception, but scientists who study sharks say that behavior has never been recorded and that tiger sharks grow to only about 17 feet ( 5 meters) in length.

University of Hawaii professor and veteran shark researcher Kim Holland has never heard of any kind of shark repeatedly attacking a boat hull throughout a night. He also said tiger sharks never jump out of the water and do not make coordinated attacks.

Sometimes sharks will congregate around a food source like a whale carcass, but Holland said that was unlikely in this case "if there's nothing there to attract the animals. I mean this is just an inert boat hull."

As time goes on, new details emerge in the women's account, and other details change. They have now reported making contact with someone at Wake Island but previously said no one responded to their calls for help.

Their account of receiving a tow from a Taiwanese fishing vessel changed as well. They originally said the crew was kind, but later said they were worried for their safety and thought that the crew might be making an attempt to harm them.

They added that the fishing boat had backed into their sailboat, causing significant damage.

"I also believe that they knew they were damaging the boat. And if we couldn't get additional help, that boat would sink, and they would get ... two girls to do whatever they wanted to," Appel said.

The captain of the fishing vessel, the Fong Chun No. 66, who identified himself as Mr. Chen in a satellite phone call from the AP, said his boat received a mayday radio call but did not understand it. They then saw someone waving a white object on a boat about a nautical mile away.

When they approached, the women asked to use the satellite phone on the fishing vessel and for a tow to Midway Island. The larger vessel towed the smaller sailboat overnight. In the morning, the women wanted to stop the towing and called for a naval vessel.

"We offered to get them on board the fishing boat and asked whether they needed water or food, but they refused," the captain said.

The fishermen left after the arrival of the U.S.S. Ashland.

Hawaii sailing experts say the trip itself was a bad idea.

Mike Michelwait, owner of the Honolulu Sailing Company, a sailing school and charter company, has sailed the route from Hawaii to Tahiti several times. He said the trip would normally take about 17 days with sailors who could stay on course.

But, Michelwait said, he would not take such a trip with any less than three experienced sailors.

At some point, Appel joined the Hawai'i Actors Network, noting on the group's website that she has "been known to do almost any skydiving or motorcycle stunt — camera optional." Through the group, she found work as an extra in the former TV series "Off the Map" and the former sitcom "Cougar Town," appearing in that show in a pink bikini in the background of a season finale.

A call to the actors' network was not returned.