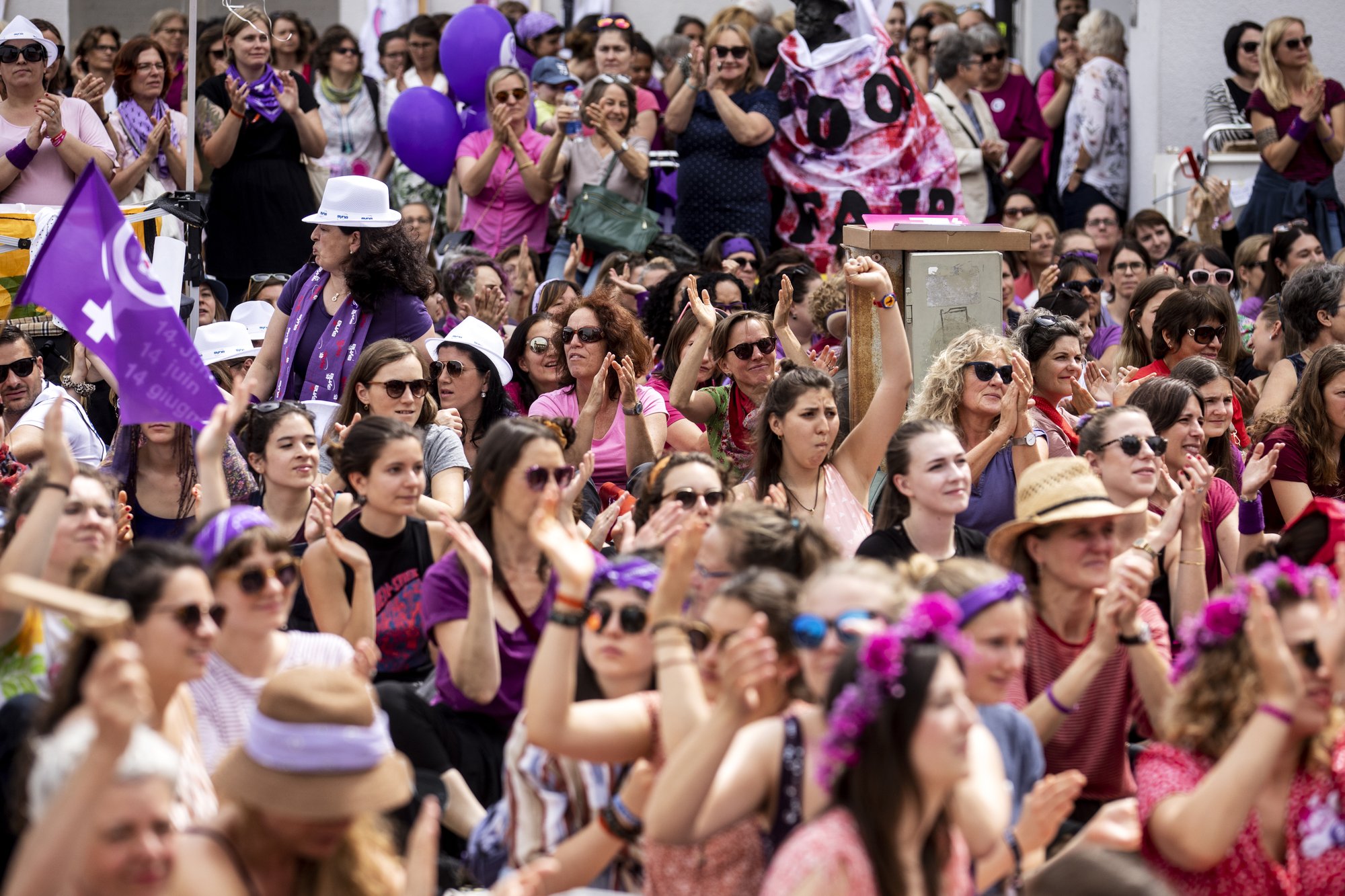 Women across Switzerland walked off the job, burned bras and blocked traffic Friday in a day of demonstrations to demand fairer pay, more equality and an end to sexual harassment and violence. It was the first such protests in the Alpine nation in 28 years.

Swiss female lawmakers — mostly decked out in purple, the movement’s color — streamed out of parliament Friday in the capital of Bern, where several thousand women were demonstrating, public broadcaster RTS reported.

Demonstrators in Geneva’s Parc Bertrand hoisted a banner showing that only 8% of jobs in engineering were held by women in Switzerland, in contrast to 91% of the country’s domestic help jobs.

Also in Geneva, demonstrators bedecked the statues of four bearded Protestant reformers with purple-colored scarves and put up alternative street names honoring women underneath the official street names, which have been given to men.

Earlier in Lausanne, hundreds of women rallied at the city’s cathedral around midnight Thursday and marched downtown to set wooden pallets on fire, throwing items like neckties and bras into the inferno. A few women scaled the cathedral to shout out the hour, a Swiss tradition rarely carried out by women.

In Lucerne, hundreds of women staged a sit-down protest in front of the city’s theater, according to the Tages-Anzeiger newspaper, and some of the paper’s female reporters joined in.

People across the country wore face paint or stickers.

In symbolic gestures large and small, businesses showed their support for the protests. The Roche Tower in Basel, the northwestern city’s highest skyscraper, lit up in the logo of the movement. Restaurants and stores hung purple balloons and the strikers’ logos.

Swiss women were urged to leave their workplaces at 3:24 p.m. — the time when organizers figured women should stop working to earn proportionally as much as men in a day.

Vanessa Trub, a Geneva pastor and vice president of a city association of ministers and deacons, said protesters on Friday were also demanding longer paternity leave — now just one day in Switzerland — to get men to help out more with child care.

The International Labour Organization reported recently that Switzerland is one of the worst nations in Europe and Central Asia when it comes to the post-high school education gap between the sexes, especially in the STEM science fields.

The Swiss statistics office also says of the 249 homicides recorded in the country between 2009 and 2018, 75% of the victims were women and girls.

Friday’s events evoked the protests on June 14, 1991, that drew hundreds of thousands of Swiss women out to condemn discrimination. The date was 20 years after Swiss women won the federal right to vote and a decade after sexual equality became law.

One Swiss region, Appenzell Innerrhoden, did not allow all Swiss women to vote in local elections until it was ordered by a court to do so in 1990.