MONTREAL, Canada -- As negotiations at a crucial UN conference on biodiversity are underway, the world is awaiting an ambitious roadmap to protect nature and halt biodiversity loss. 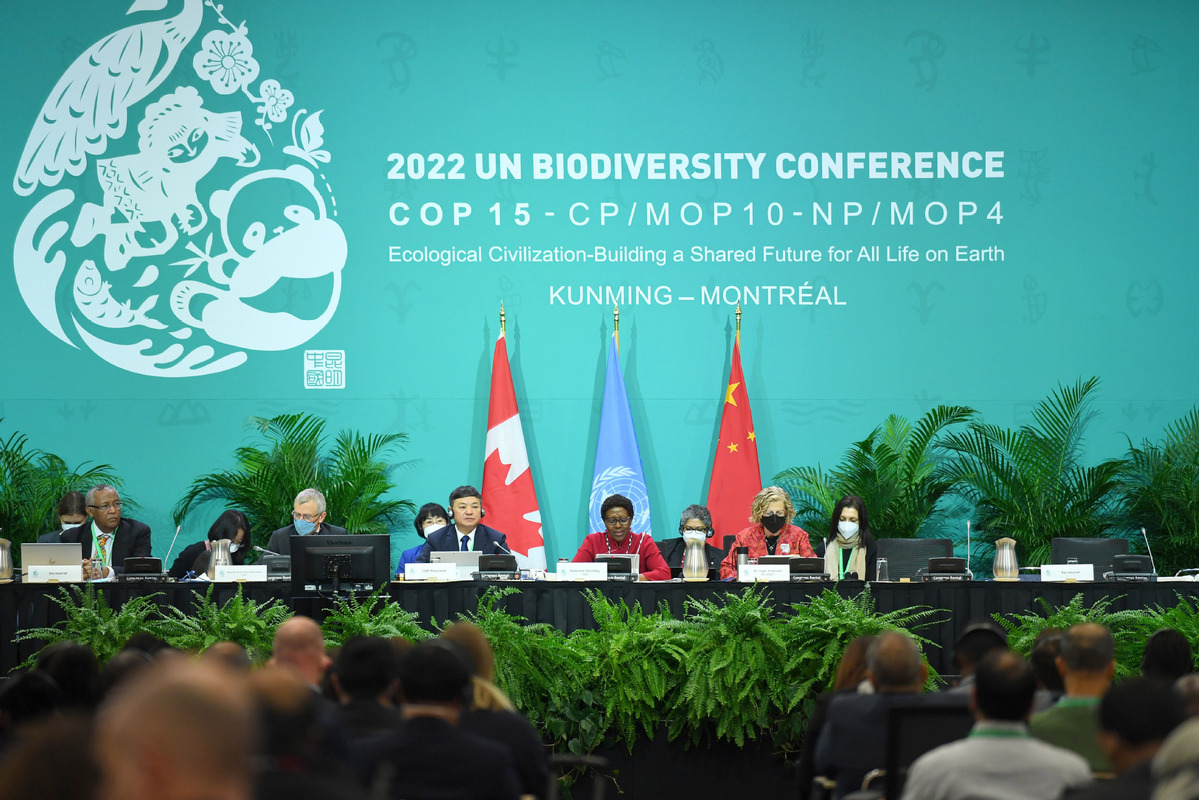 This photo taken on Dec 7, 2022 shows the opening ceremony of the second phase of the 15th meeting of the Conference of the Parties to the UN Convention on Biological Diversity (COP15) in Montreal, Canada. [Photo/Xinhua]

The conference, formally known as the second phase of the 15th meeting of the Conference of the Parties to the UN Convention on Biological Diversity (COP15), kicked off here on Wednesday, and is expected to conclude with the adoption of a post-2020 global biodiversity framework later this month.

While stakeholders of the conference are striving to meet halfway and reach an agreement on the framework, there are growing appeals for saving nature for future generations to come.

"My hope is to see a final agreement that is ambitious enough to make a real difference in halting the decline in our natural systems, but one that is still achievable," Great Barrier Reef Marine Park Authority Chair Ian Poiner told Xinhua.

In the eyes of Poiner, who is also a marine scientist with long-time involvement in Great Barrier Reef science and conservation, biodiversity is directly related to the resilience of the ecosystem itself, while humans depend on the services presented by ecosystems, such as freshwater, pollination, soil fertility and stability, food and medicine.

The expert warned that ecosystems weakened by the loss of biodiversity are less likely to deliver those services, especially given the needs of an ever-growing human population.

COP15 provides an opportunity for the world to step up for nature and take a leap forward in halting biodiversity loss, he said.

COP15 is a historic opportunity to see a "Paris"-style agreement, but for nature, said Marco Lambertini, director general of World Wide Fund for Nature International.

"We have the opportunity for the whole world to agree on a global plan and global goals for nature in order to address the crisis of biodiversity loss," he urged. "Nature conservation is critical, not just for nature, but actually for all of us, for our future, and particularly for the climate agenda. It's a great opportunity, we can't miss it."

Daniel Zheng, a student from McGill University in Montreal, Canada, told Xinhua that he has high expectations for the outcome of COP15, and he hopes the document can propel countries to monitor environment and make corresponding policies to protect biodiversity.

As a student majoring in agricultural economics, he also underlined the important role of non-governmental forces in saving nature as every person has a share of responsibility in this cause.

UN statistics show that around 1 million animal and plant species are threatened with extinction more than ever before in human history. Globally, 97 percent of the ecosystem has been degraded as the result of human activities or human action.

Humanity has become a weapon of mass extinction, said UN Secretary-General Antonio Guterres at an opening ceremony held on Tuesday.

"There is no Planet B," warned the UN chief. "Together, let's adopt and deliver an ambitious framework -- a peace pact with nature -- and pass on a better, greener, bluer and more sustainable world to our children," he said.

Guterres also urged developed countries to provide bold financial support for the countries of the Global South as custodians of the world's natural wealth.

And the framework must recognize and protect the rights of Indigenous peoples and local communities, who are the most effective guardians of biodiversity, she noted.

It also must ensure the equitable sharing of benefits from the use of genetic resources through digital sequence information or other means, she added.

"We also want to see an achievable plan for implementation and resource mobilization," said Elizabeth Maruma Mrema, executive secretary of the UN Convention on Biological Diversity.

The short-term goal is to halt biodiversity loss and put biodiversity on a path to recovery by 2030 and then, by 2050, achieve the global vision of "living in harmony with nature," she said.

China holds the presidency of COP15. The second phase of COP15 follows the phase-one meeting held in Kunming, capital of southwest China's Yunnan Province, with the continued theme of "Ecological Civilization: Building a Shared Future for All Life on Earth."

"Since assuming the presidency of COP15, China has been advancing the COP15 process with the highest political will and strongest actions, and responding to the expectations of the international community with concrete actions," said Huang Runqiu, minister of ecology and environment of China, at a press conference on Tuesday.

"As the president of COP15, China will continue to spare no effort to exert its leadership and do its utmost to promote and coordinate the adoption of the framework at the second phase of the conference," he said.

The main challenges of the negotiation lies in three aspects, according to Huang. One of the challenges, he said, is to strike a balance between the three goals of the convention, which are, the preservation of biological diversity, the sustainable use of its components, and the fair and equitable sharing of the benefits.

Another is the mobilization of financial resources, he added. "There is still a large gap in funding, as well as disagreement in funding mechanisms."

The third is on the access and benefit-sharing of the digital sequence information of genetic resources, said Huang. "Though progress in this respect has been achieved, many technical and policy issues remain unresolved."

Relevant parties, international organizations and stakeholders are expected to demonstrate the spirit of cooperation, political determination, sincerity and flexibility in the meeting, build strong consensus, and actively seek compromise solutions on key issues, said Huang in his opening remarks at the conference on Wednesday.