Leaders from every corner of the globe briefly united Thursday in homage to Queen Elizabeth II, after the world's longest-serving monarch died at her Scottish home at age 96. 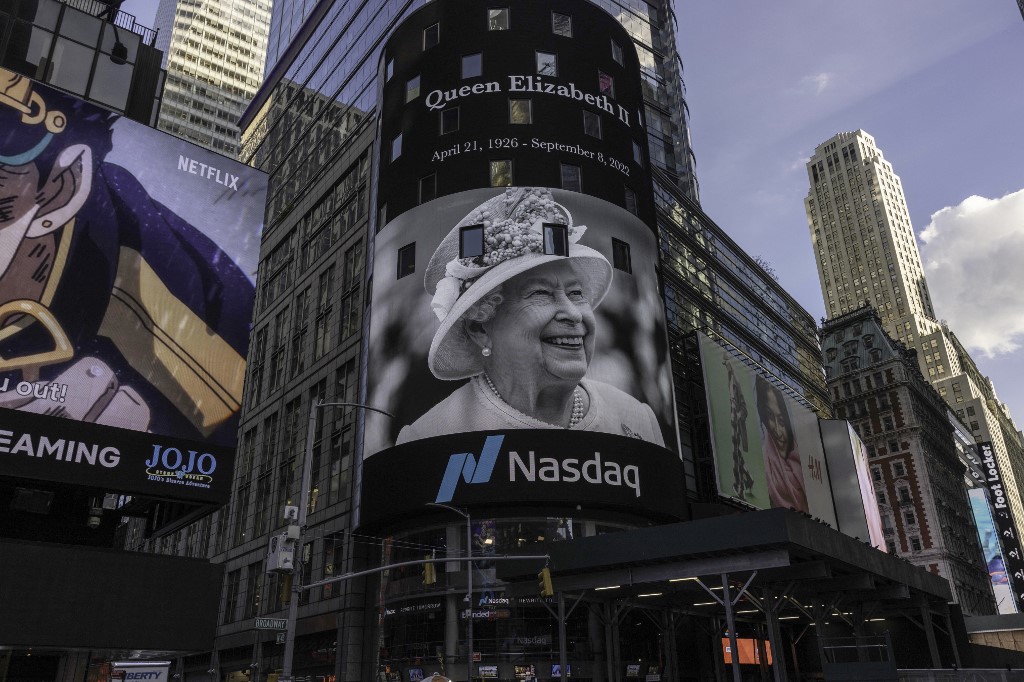 An image of Queen Elizabeth II is displayed at Times Square in New York on September 9, 2022 following her dath at age 96. (Photo: AFP)

Tributes poured in -- from countries she had ruled over to those she had been at war with, from tiny territories to the mightiest governments on the planet, and from centuries-old institutions to nations that had not yet been born when she took the throne.

Here are some of the accolades to Queen Elizabeth, who had ruled the United Kingdom since 1952 and was also head of state in 14 Commonwealth countries around the world.

Global tributes were led by the Commonwealth, the association of countries that were previously part of the British empire as well as its remaining overseas territories.

South Asia, where Britain was the colonial power until just before Elizabeth's reign began, paved the way, with India's Prime Minister Narendra Modi saying he was "pained" by her death.

In the southern hemisphere, South Africa's President Cyril Ramaphosa described how he and the queen had reminisced together about Nelson Mandela, while Kenya's president-elect William Ruto hailed her "admirable" leadership of the Commonwealth.

Australia's Prime Minister Anthony Albanese paid tribute to her "timeless decency" and said her death marked the "end of an era."

On the other side of the world, Canadian Prime Minister Justin Trudeau said Elizabeth, who as queen was Canada's head of state, was a "constant presence in our lives -- and her service to Canadians will forever remain an important part of our country's history."

US President Joe Biden called the queen the first British monarch to make a personal connection with people around the world, as he ordered flags at the White House and government buildings flown at half-staff in her honor.

"Queen Elizabeth II was a stateswoman of unmatched dignity and constancy who deepened the bedrock alliance between the United Kingdom and the United States. She helped make our relationship special," he said.

Others who have taken a less friendly view of Britain also sent tributes.

While Germany, which in the queen's lifetime went from Britain's greatest enemy to a powerful ally, hailed her as a "symbol of reconciliation" after two world wars.

"Her commitment to German-British reconciliation after the horrors of World War II will remain unforgotten," said German Chancellor Olaf Scholz.

Argentina, which fought and lost a bitter war with Britain over the Falkland Islands in 1982, expressed its "regret" over Elizabeth's passing. In a terse statement from the foreign ministry, the government offered its sorrow and said it "accompanies the British people and her family in this moment of grief."

At the United Nations, the Security Council held a minute of silence.

Queen Elizabeth had been "widely admired for her grace, dignity and dedication around the world. She was a reassuring presence throughout decades of sweeping change," UN Secretary-General Antonio Guterres said.

In the Vatican, Pope Francis said he was "deeply saddened" by her death and would pray for the late queen as well as King Charles.

European Union leaders expressed regret at the death of the queen, who was Britain's head of state throughout its entire EU membership and eventual departure.

"Once called 'Elizabeth the Steadfast', she never failed to show us the importance of lasting values in a modern world," said EU council president Charles Michel.

Philippe, King of the Belgians and who has a close family link to the British aristocracy, hailed the queen as "an extraordinary personality."

King Willem-Alexander of the Netherlands, Queen Maxima and Princess Beatrix said they "feel a strong bond with the United Kingdom and its royal family, and we share their sorrow at this time."

King Carl XVI Gustaf of Sweden called her "a good friend of my family and a link to our common family history."

And Spanish King Felipe VI said she "wrote the most relevant chapters of history."

Ireland's President Michael Higgins called Queen Elizabeth II "a remarkable friend" who had "great impact on the bonds of mutual understanding between our two peoples".

Scottish leader Nicola Sturgeon, who supports Scotland's independence from the rest of Britain, called her death "a profoundly sad moment for the UK, the Commonwealth and the world."

And French President Emmanuel Macron hailed the queen as "a friend of France... who marked her country and her century as never before".

Queen 'to all of us'

Even far-right President Jair Bolsonaro of Brazil, which does not have particularly close ties to Britain, paid homage.

Bolsonaro, seeking re-election next month, declared three days of national mourning and called Elizabeth "a queen not just to Britons, but to all of us."