WASHINGTON, March 26 (Xinhua) -- Convening his first press conference as U.S. president on Thursday, Joe Biden touched upon a spate of issues that have emerged during his two-month presidency so far, some of them catching him off guard, indicating how easily a new president's agenda could be affected by the emergence of unexpected events. 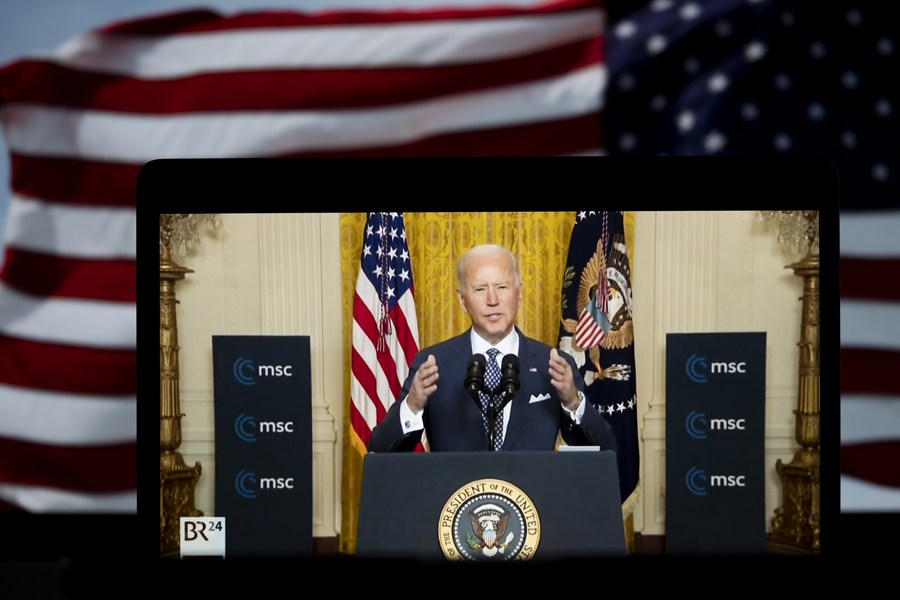 Photo taken in Arlington, Virginia, the United States, on Feb. 19, 2021 shows a screen displaying U.S. President Joe Biden speaking in Washington, D.C. during a virtual event with the Munich Security Conference in a video provided by the U.S. State Department. (Xinhua/Liu Jie)

Standing alone in the East Room inside the White House, Biden opened the press conference by touting his administration's achievements in combating the coronavirus pandemic, including achieving 100 million vaccinations well ahead of schedule, speeding up school reopenings, as well as passing the American Rescue Plan that has injected fresh impetus into the battered economy.

The first question Biden received, however, challenged him on whether he could deliver on his promise made to Americans on issues like immigration reform, voting rights and gun control.

In response, Biden said that compared to "the most urgent problem" of COVID-19 and the economic dislocation for the American people, those issues are long-term ones that his administration is now able to tackle "one at a time."

The ongoing surge of migrant border-crossings took center stage during the hour-long session, with discussions sometimes getting heated, forcing the president to defend his administration's response while shifting the blame to the hardline policies adopted by his predecessor President Donald Trump.

Biden rejected the notion that his "nice guy" approach to immigration has led to the excessive influx, arguing instead that Central American migrants are coming to the United States mainly because they want to escape economic and social hardships in their home countries, and that the migrants' desire to arrive before summer heat hits the desert along the route is also a contributing factor.

Calling conditions at the Customs and Border Protection (CBP) facilities, where some 5,000 unaccompanied migrant children are being held, "totally unacceptable," Biden blamed the Trump administration for dismantling the migration processing system, thus leaving him in a disadvantageous position. The CBP is detaining twice as many new unaccompanied minors in those facilities daily as they did when the number last reached its peak in 2019.

The president vowed to expand his administration's capacity to care for migrant children, so that they can quickly leave the jail-like CBP facilities. But the agency in charge, the Department of Health and Human Services, has already accommodated over 11,000 such children and is scrambling to find additional shelters.

Admitting that he cannot guarantee a solution to the border problem completely, Biden pledged that the situation will "get a whole hell of a lot better real quick."

Biden said the Senate should make it harder for its members to stage a parliamentary maneuver known as a filibuster, which requires 60 votes to advance most legislation. He said the filibuster, which is increasingly imperiling his administration's legislative agendas in the now evenly divided Senate, was being "abused in a gigantic way."

Biden, whose career in public service includes a 36-year span in the Senate, has opposed ending the filibuster outright, suggested on Thursday that he was open to making further changes to -- or even totally getting rid of -- the filibuster.

The president's agitation became particularly visible when he assailed the attempts by Republican-controlled state legislatures nationwide to pass voting-restriction measures. He denounced the efforts as "sick" and "un-American," while citing GOP impediment to passing a voting rights reform in Congress as something that could embolden him on the issue of filibuster.

On the mass shootings taking place days apart over the past two weeks that killed altogether 18 people, Biden, who has urged Congress to pass gun reform bills, played down the urgency of the legislative actions this time.

"Successful presidents, better than me, have been successful, in large part, because they know how to time what they're doing," he said. "Order it. Decide priorities."