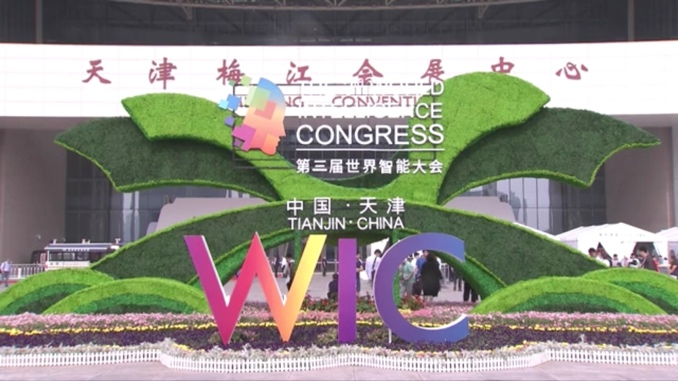 The Chinese city of Tianjin is holding the third World Intelligence Congress from May 16-19, 2019. ( Photo: CGTN)

The third World Intelligence Congress (WIC) kicked off in the Chinese city of Tianjin on Thursday. Hundreds are in attendance, watching technologies usher in a whole new world of smart, intelligent lifestyles.

Chinese President Xi Jinping sent a congratulatory letter to the opening ceremony, hoping that intelligence technologies can develop and scientists and industry insiders can join hands to benefit people around the world.

"The whole world is undergoing a new round of scientific revolution and an industrial transformation. Many believe that artificial intelligence (AI) is the strategic base for leading it," Wang said.

That's why at this year's WIC, transforming new technology into reality is among the biggest highlights.

Lan Bin, a member of the marketing staff at China's Tsinghua University, said that they have signed letters of intent with 16 Tianjin hospitals in 73 AI medical programs.

Ma Xiujun, a professor at Peking University, said that they have many projects on hand, including a platform for sharing big data, which recently won first prize at China's State Technological Invention Awards.

Such transformations now can be seen everywhere, and many will materialize soon, if they haven't already.

State-of-the-art intelligence technologies like these are rapidly transforming our lives into a digitalized and more convenient existence.

After over 60 years of development, AI has gained momentum.

According to the Chinese Institute of Electronics, the scale of the core AI market worldwide exceeded 55 billion U.S. dollars last year, an increase of more than 50 percent over the previous year.

Despite that, there are concerns.

Thomas Reichert, a director at The Boston Consulting Group, said that AI is good in many ways, but it can also be misused.

"I encourage the general dialogue between the industry participants and the governments about what is the right way to govern it," he said.

Officials say China is making, or planning to make, relevant laws and regulations, and will deepen cooperation with others in developing AI.