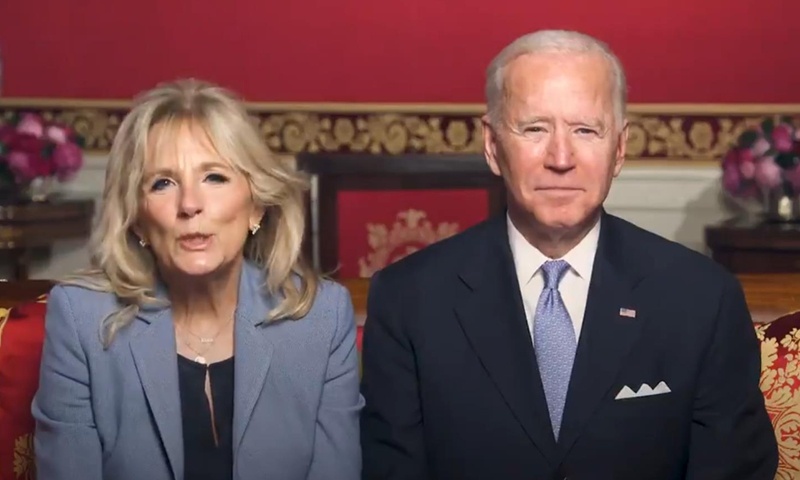 Many leaders worldwide sent Lunar New Year greetings to people around the world celebrating the Chinese New Year, including US President Joe Biden, French President Emmanuel Macron and UN Secretary-General Antonio Guterres, with Chinese analysts saying this is a positive signal for greater unity and friendship.

This is the first time for Biden to share a Chinese Lunar New Year greeting as the US president. Biden and his wife First Lady Jill Biden wished Asian Americans and Pacific Islanders a happy, healthy and prosperous Lunar New Year. They said on Friday via video that "racism, harassment, hate crimes" against this group of people is "simply wrong" and called for greater unity in the country.

On Wednesday, before the Lunar New Year's Eve, he sent the greetings to all Chinese people and Chinese President Xi Jinping during a phone call with Xi.

Chinese analysts said that by criticizing racism, Biden has made a firm determination to end the destructive legacy of the previous administration led by Donald Trump, which played up racism and blamed Chinese for the pandemic by calling the novel coronavirus "China virus." That harmed not only Chinese people but also Asians from other countries.

Li Haidong, a professor at the Institute of International Relations of the China Foreign Affairs University, told the Global Times on Saturday that Biden's greetings show that US elites want the country return to a more rational political posture, and the US would also agree that in order to overcome so many shared challenges, there is no reason for the US to wield hatred and racism against other countries, including China.

However, according to the readout released by the White House, the US has stressed divergence more than cooperation, especially on domestic affairs and issues of core interest to China including Hong Kong, Xinjiang and Taiwan, with Chinese experts saying that there are still challenges for the recovery of China-US ties, and the key is how to manage the fraught subjects.

French President Macron sent his greetings in four languages on his tweeter - French, Chinese, Korean and Vietnamese. He said, "To all those celebrating the Lunar New Year, I send my best wishes for health, success and happiness!"

Asian countries' leaders like Japan, South Korea and the Philippines also delivered the greetings. Philippine President Rodrigo Duterte wished that both countries will enjoy better ties this year. "I would like to greet President Xi Jinping and the Chinese people a Happy Lunar New Year celebration," he said. "May this new year find us all working together to further strengthen the friendship and cooperation between our governments and people," he noted, according to the Manila Times on Saturday.

Although some Western countries' ties with China have been harmed by anti-China sentiment or Sinophobia due to the pandemic and other issues, national leaders displayed a friendly attitude toward Chinese and Asian immigrants in their countries by marking the Lunar New Year.

UK Prime Minister Boris Johnson on Friday has sent his "best wishes to everyone celebrating Chinese New Year this weekend," and said during the Year of the Ox, "we have many shared challenges with the Chinese people, from defeating COVID-19, to tackling climate change and supporting a worldwide economic recovery."

These leaders' remarks have proved that anti-China sentiment which has become increasingly common among some conservative and extreme political forces in the past are not welcomed, and the Trump administration had created huge uncertainty to the world and created friction which has been unhelpful to the international cooperation, so now the world leaders sent messages to vow for unity and certainty, Li said.

Some leaders also demonstrated their knowledge on Chinese culture. UN Secretary-General Guterres said in his greetings that "the Ox symbolizes energy, strength and courage. These qualities are the world needs now."

Chinese people worldwide have exerted huge influence for the Chinese culture, and the Lunar New Year is also becoming a global festival that get celebrated worldwide rather than a specific cultural symbol in Asia, said analysts.

An ever growing group of countries have realized that in dealing with shared challenges like the pandemic, climate change and economic recovery, China will play greater role and they have no choice but to cooperate with China, and China also shows great sincerity and effort to prove it is a responsible major power, said Zhang Yiwu, a professor at Peking University. Zhang noted that "more and more people worldwide will realize China's contribution amid this difficult time, and China's role as a responsible international actor will become increasingly important."