World leaders to mark WWI in France amid warnings about nationalism 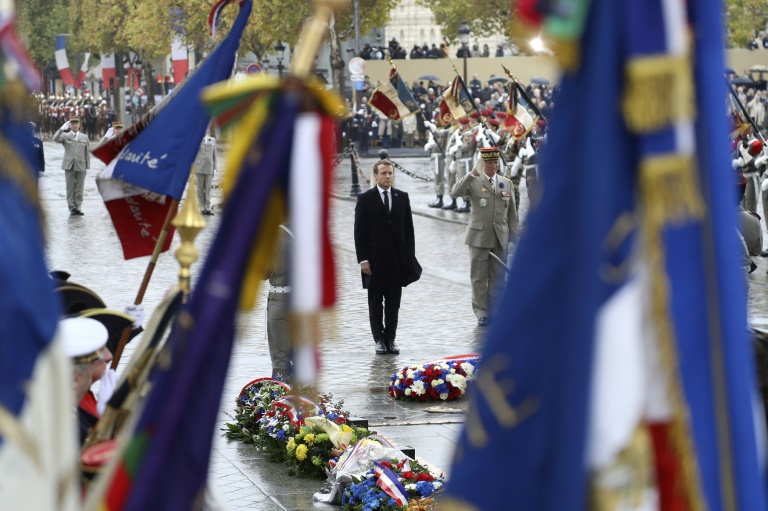 French President Emmanuel Macron on Sunday kicks off a week of commemorations for the 100th anniversary of the end of World War One, which is set to mix remembrance of the past and warnings about the present surge in nationalism around the globe.

Some 70-80 world leaders including US President Donald Trump and his Russian counterpart Vladimir Putin are preparing to fly to the French capital next weekend for a ceremony marking a century since the guns fell silent.

This Sunday, Macron begins his own week-long tour around the country, which will see him criss-cross war-hit areas in northern and eastern France and attend individual ceremonies with the leaders of Germany, Britain and Mali.

The 40-year-old French centrist is expected to use the international spotlight to issue a rallying cry against nationalism, having recently warned that the world risked forgetting the lessons of the 20th century's great conflicts.

"I am struck by similarities between the times we live in and those of between the two world wars," he told a French newspaper last week, adding that nationalism was a "leprosy" spreading worldwide.

Trump, who has made "America First" his rallying cry, will be among the leaders gathered for the main ceremony on the Arc de Triomphe in Paris on November 11, 100 years to the day since the armistice.

The commemorations at the Tomb of the Unknown Soldier on the Champs-Elysees avenue will be held under tight security following a string of deadly jihadist attacks in France over the past three years.

Remembrance events begin this Sunday with a concert celebrating the friendship between former war-time enemies France and Germany, in the border city of Strasbourg, attended by Macron and German President Frank-Walter Steinmeier.

Macron will then spend the week visiting the Western Front battlefields, from Verdun to the Somme.

On Tuesday, in honour of the "black army" of former colonial troops who fought alongside the French, he and Mali's President Ibrahim Boubacar Keita will visit Reims, a city defended by the African soldiers.

Britain's Prime Minister Theresa May will join Macron on the Somme on Friday, while on Saturday he heads to the village of Rethondes, where the armistice was signed, with German Chancellor Angela Merkel.

"After paying homage to those who died for their country it will be back to dealing with social and economic problems," said Bruno Cautres of political think-tank CEVIPOF.

The former investment banker -- who has struggled to shake off an image as a "president of the rich" -- will zip through 17 towns, holding Wednesday's weekly cabinet meeting in the Ardennes where the German army had its headquarters for four years.

"Each stop will be an opportunity to speak about the current concerns in those areas, which are trying to bounce back from de-industrialisation or major changes in agriculture," an aide to Macron said last week.

The 40-year-old president, whose approval rating is languishing at a dismal 21 percent according to a YouGov poll released Thursday, has dismissed rumours that he is suffering from burn-out.

He sparked rampant speculation by taking a few days off ahead of the tour, which aides have insisted were to gather his energy before an intense week of diplomacy.

This week is an opportunity for the centrist to "reflect a strong presidential image" both at home and abroad, Cautres said.

Macron is attempting to position himself as a champion of centrist politics and multilateralism in the run-up to European parliamentary elections in May, saying he expects the duel to be one between "progressives" and "nationalists".

After next Sunday's ceremony, world leaders are set to attend a three-day peace forum opened by Merkel, an event which France wants to turn into an annual multilateral peace conference.