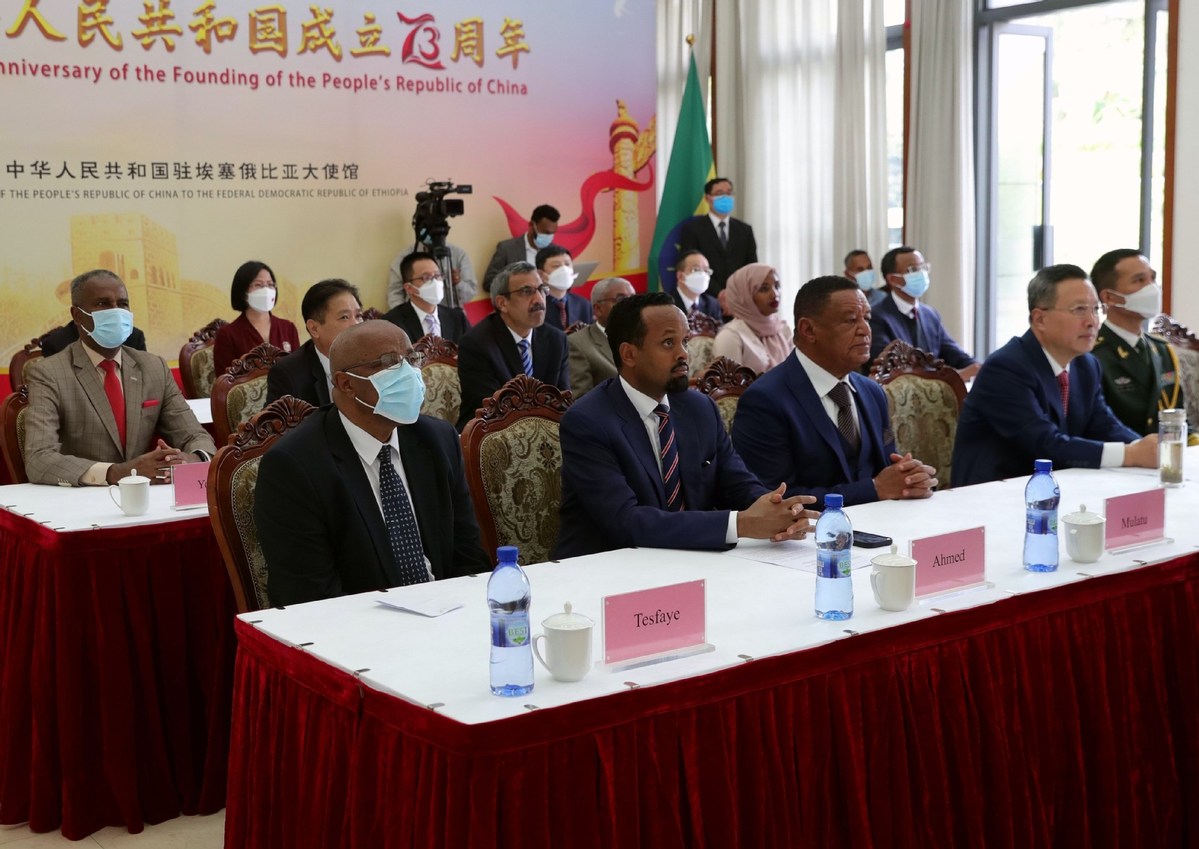 A ceremony is held to celebrate the 73rd anniversary of the founding of the People's Republic of China in Addis Ababa, Ethiopia, Sept 26, 2022. (Photo: Xinhua)

Chinese embassies in various countries have held events to celebrate the 73rd anniversary of the founding of the People's Republic of China, during which world officials have eyed deeper cooperation.

Appreciating China's development achievements in the past ten years, they expressed willingness to strengthen cooperation with China in various fields, and expected China to continue to play an important role in international affairs and make greater contribution to world peace and development.

Csaba Korosi, president of the 77th session of the UN General Assembly, congratulated China on its achievements in promoting development and prosperity.

"As a founding member of the UN and a permanent member of the Security Council, China has been a strong buttress to the blue flag (of the UN)," Korosi said in his remarks, adding that he was also pleased to hear China's support for efforts to combat climate change.

"China's Global Development Initiative offers a great opportunity to catalyze sustainable development and to implement the 2030 Agenda," he said.

"As we mark this important milestone, let us look ahead and work to ensure that China and the world advance in our shared efforts to address regional and global challenges," he said.

Philippine Vice President Sara Duterte-Carpio said that under the leadership of the Communist Party of China (CPC), China has gained global recognition as an economic powerhouse, and a modern center for research and development, technological advances and manufacturing.

Because of China's contribution, Asia is now the fastest growing economic region in the world, she said. "We look forward to forging more partnerships and collaborations with you as we journey together towards achieving our sustainable development goals."

Zoran Tegeltija, chairman of the Council of Ministers of Bosnia and Herzegovina (BiH), said China under the leadership of the CPC and the hard work of the Chinese people has done a lot for its development and achieved extraordinary successes in various areas.

BiH remains committed to the further improvement of cooperation between the two friendly countries for the benefit of the two peoples, and to respecting the one-China principle, he said.

Speaking highly of China's development achievements in the past ten years and Georgia-China relations, Shalva Papuashvili, chairman of the Parliament of Georgia, expressed willingness to further strengthen political mutual trust, continuously deepen bilateral relations, actively participate in Belt and Road cooperation and push for more achievements in bilateral cooperation in various fields, so as to further benefit the two peoples.

Venezuelan Minister of Communication and Information Freddy Nanez said the CPC has led the Chinese people through arduous exploration and great practice to achieve the goal of eradicating absolute poverty and create a miracle of long-term social stability and rapid economic development.

Venezuela firmly believes that the CPC will lead the Chinese people toward a bright future of national prosperity and rejuvenation, and is ready to work with China to promote the building of a new multipolar international order featuring equity and justice and jointly usher in a better future, he said.

Marcin Przydacz, undersecretary of state in Poland's Foreign Ministry, said in a video message that China has achieved remarkable economic success, which has also been translated into social development, adding that over the past year, Poland and China have witnessed frequent high-level exchanges and fruitful practical cooperation.

Speaking highly of China's great achievements in development, Secretary-General of Jordan's Ministry of Foreign Affairs and Expatriates Hazem Al-Khatib said Jordan is looking forward to further strengthening exchanges and cooperation with China in personnel exchanges, trade and investment, new energy development, tourism and study and other fields to push Jordan-China relations to a new level.

Bangladeshi Planning Minister M. A. Mannan praised China's development achievements, saying that China is an important development partner of Bangladesh and has made great contributions to Bangladesh's infrastructure development.

Bangladesh firmly supports the one-China principle and is ready to work closely with China to push forward bilateral relations, he said.

Mmamosadinyana Molefe, acting permanent secretary to the Ministry of Foreign Affairs of Botswana, praised China's great achievements in economic and social development and the fight against COVID-19 under the strong leadership of the CPC, adding that Botswana believes that the bilateral relations will definitely achieve greater development.