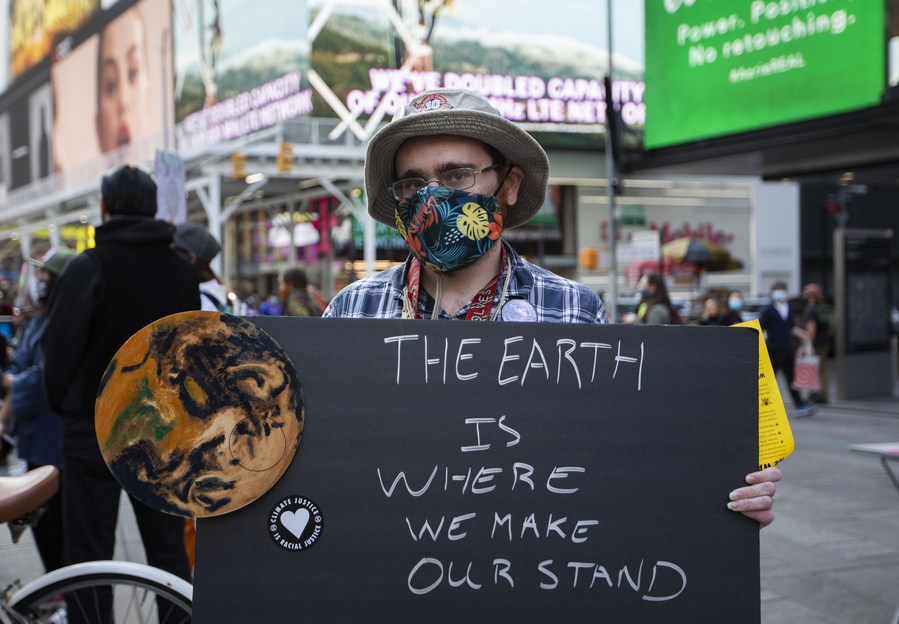 A man takes part in a climate change protest in Times Square in New York, the United States, on Sept. 20, 2020. (Xinhua/Wang Ying)

"If we continue on our current path, we will face the collapse of everything that gives us our security: food production, access to fresh water, habitable ambient temperature, and ocean food chains," Attenborough issued the sobering warning to leaders, adding that "if the natural world can no longer support the most basic of our needs, then much of the rest of civilization will quickly break down."

Britain holds the rotating presidency of the 15-member Council this month.

During an approximately eight-minute virtual address to the Council, Attenborough warned that the world was dangerously close to "tipping points" that, if surpassed, could send the globe spiraling into uncontrolled warming.

While there is no going back, Attenborough stressed that if countries act fast enough, "we can reach a new stable state."

He pointed to the immense public support worldwide for climate action.

"People today all over the world now realize this is no longer an issue which will affect future generations," he said. "It is people alive today, and, in particular, young people, who will live with the consequences of our actions."

The United Nations is working towards planning a climate summit in Glasgow, Scotland, this November amid a push for the world's nations to address global warming-causing emissions.

The summit, which is billed as the most important event on the topic since the Paris climate accords, will also serve as a deadline for countries around the world to commit to cutting emissions on a larger scale.