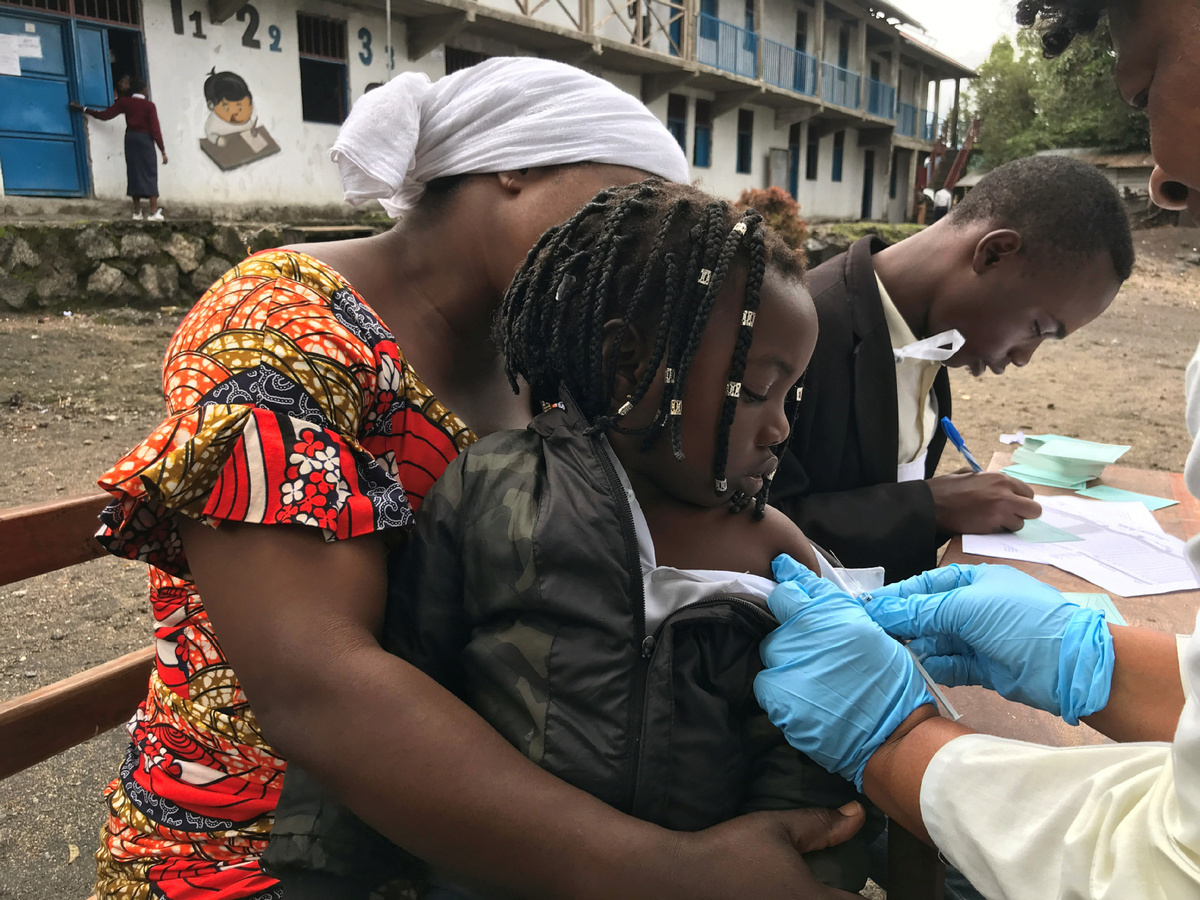 Health workers vaccinate a girl against measles at a school in eastern Congolese town of Goma, Democratic Republic of Congo, Dec 11, 2019. [Photo/Agencies]

More than 6,000 people in the Democratic Republic of Congo have died of measles since an outbreak started last year, according to the World Health Organization.

Calling it the world's worst measles epidemic, WHO has asked for more funding to stop the outbreak, adding around 310,000 suspected cases have been reported since January 2019.

"We are doing our utmost to bring this epidemic under control. Yet to be truly successful, we must ensure no child faces the unnecessary risk of death from a disease that is easily preventable by a vaccine. We urge our donor partners to urgently step up their assistance," said Dr. Matshidiso Moeti, WHO Regional Director for Africa.

While more than 18 million children under the age of 5 across the country were vaccinated in 2019, in some areas routine vaccination coverage remains low and 25 percent of reported measles cases are in children over 5, the UN agency said.

WHO said the epidemic has been aggravated by low vaccination coverage among vulnerable communities, malnutrition, weak public health systems and outbreaks of other epidemic-prone diseases.

This is in addition to poor infrastructure that has frustrated healthcare access for vulnerable populations and insecurity that has hampered response in some areas.

So far the organization has mobilized $27.6 million, but a further $40 million is required for a six-month plan to extend vaccination to children between six and 14 years of age.

The funds will also be used to reinforce elements of outbreak response beyond vaccination, including improving treatment, health education, community engagement, the health system, epidemiological surveillance and response coordination.

Dr. Amédée Prosper Djiguimdé, officer in charge of the WHO office in DR Congo, emphasized the need for more funding.

"We recognize the government's engagement in efforts to end the outbreak and we are grateful for the generosity of our donors. But we still need to do more," Djiguimdé said. "Thousands of Congolese families need our help to lift the burden of this prolonged epidemic from their backs. We cannot achieve this without adequate finances."

The WHO is yet to completely contain the Ebola virus disease that has claimed over 2,200 lives since its outbreak in August 2018.

In the last weekly report covering the period from Dec 18 to 31, WHO reported 29 new confirmed cases of Ebola in North Kivu province.