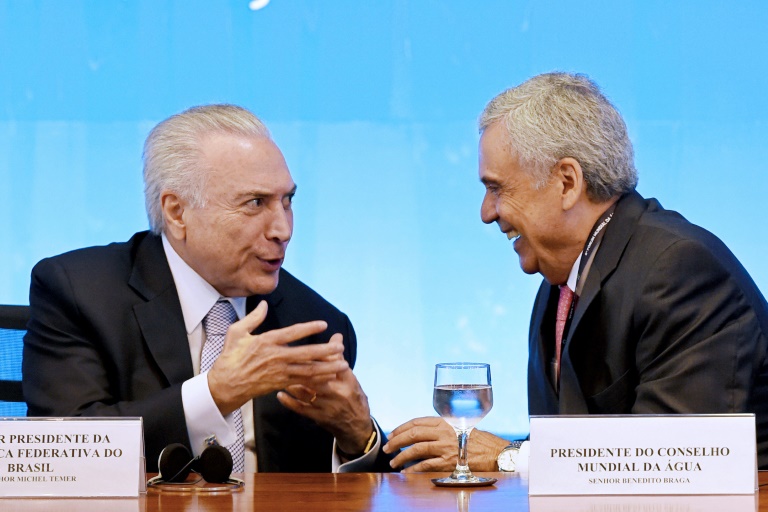 The world must race to avert disastrous loss of water supplies, Brazil's President Michel Temer told a conference Monday, after the UN said some 5.7 billion people may run short of drinking water by 2050.

"There is simply no time to lose," Temer said in opening remarks at the 8th World Water Forum, which takes place all week in the Brazilian capital.

Under the slogan "sharing water," the forum brought together 15 heads of state and government, 300 mayors and dozens of experts. An estimated 40,000 people were expected to attend, organizers say.

They were meeting shortly after publication of the United Nation's 2018 World Water Development Report, which said 3.6 billion people, or half the world's population, already live in areas where water can be scarce at least one month a year.

At the Brasilia forum, the main focus was on the specter of supplies collapsing in major urban centers, as almost happened in Cape Town this year.

Until earlier this month, the South African city was projected to run out of water as early as July, forcing the closing of household taps and extreme rationing.

That crisis has now eased, with the local government saying that a campaign to bring 60 percent reduction in consumption has done enough to dodge the shut-off.

But the drama set off alarm bells.

"This is the consensus," Temer said. "Life on earth is threatened if we don't respect nature's limits."

Brazil has its own problems. Although the country holds 18 percent of the world's drinkable water, the northeast is suffering its longest drought in history and even Brasilia has been under rationing since January 2017.

Securing supplies means shifting from so-called "grey" to "green" approaches, in other words less reliance on man-made concrete structures like dams and more on natural systems, the UN said.

"In many cases, more ecosystem-friendly forms of water storage, such as natural wetlands, improvements in soil moisture and more efficient recharge of groundwater, could be more sustainable and cost-effective," said the report's chief editor, Richard Connor.

The report said that green solutions were already proven to work, but are widely ignored.

New York, for example, has protected the three largest watersheds that supply water to the city since the late 1990s through forest preservation programs and paying farmers to be environmentally friendly.

"Disposing of the largest unfiltered water supply in the US, the city now saves more than $300 million (245 million euros) yearly on water sea treatment and maintenance costs," the UN said.

By 2020, China plans to build 16 pilot projects across the country with the aim of recycling 70 percent of rainwater through greater soil permeation, retention and storage, water purification and restoration of adjacent wetlands.

"These solutions are cost-effective" and not more expensive than traditional systems, said Connor.

The UN pointed to estimates that global agricultural production could increase by about 20 percent with greener water management practices.

And indigenous peoples could be involved in implementation, something which was not the case in "grey" infrastructure," the report said.

However, only "marginal" use is being made of such nature-based solutions.

"Accurate figures are not available", but investments in these techniques "appear to be less than one percent... of total investment in infrastructure and water resource management," according to the report.

They "are often perceived as less effective" because they are less visible, Connor said.