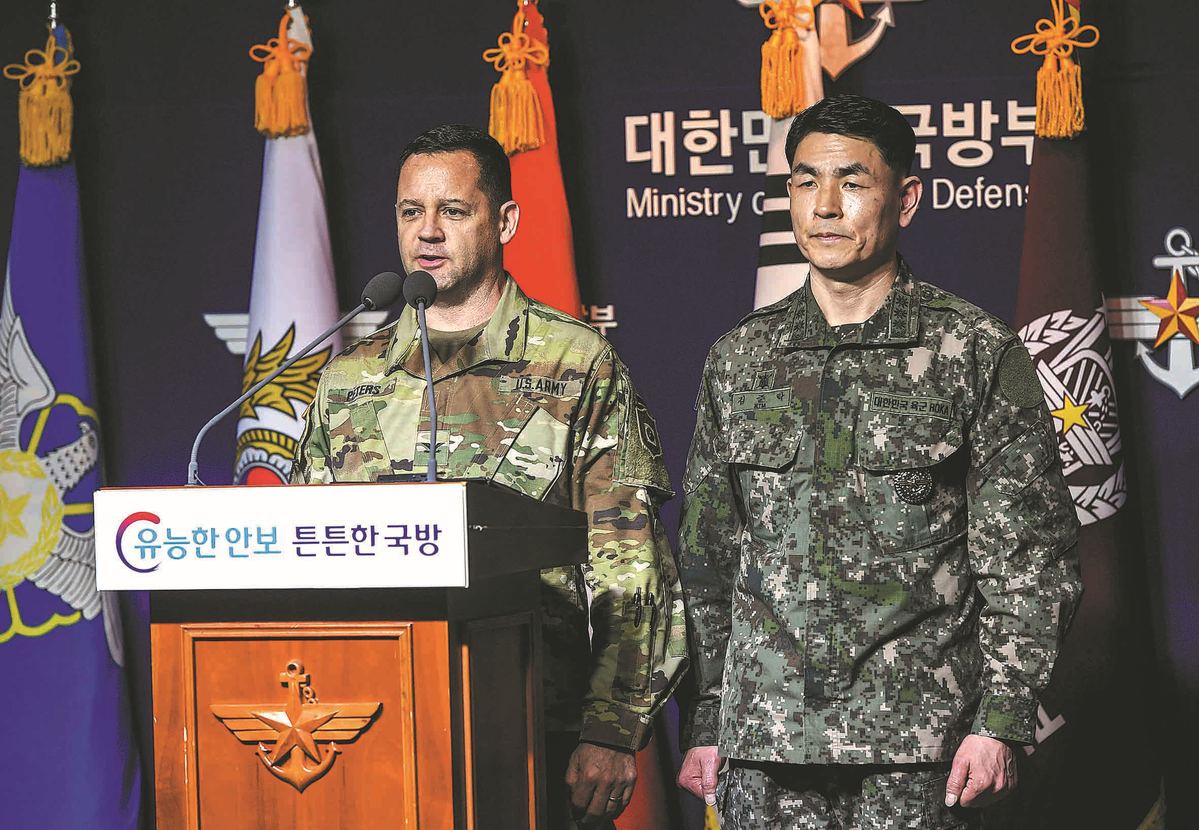 US Army Colonel Lee Peters (left), director of Public Affairs of United States Forces Korea, and Colonel Kim Jun-rak of South Korea's Joint Chiefs of Staff give a news briefing at the Defense Ministry in Seoul on Thursday on the postponement of annual joint military drills due to coronavirus concerns. (Photo: Agencies)

The World Health Organization said on Thursday that its greatest concern in relation to COVID-19 is no longer China, but the rest of the world.

The organization said during a news conference in Geneva that Thursday was the second day in which the number of new cases reported in the rest of the world exceeded new cases in China.

Outside China, there was, on Thursday, 3,474 cases in 44 countries and there had been 54 deaths. Seven countries had reported cases for the first time in the 24 hours preceding Thursday's news conference, including Brazil, the first in South America to do so.

"It's what is happening in the rest of the world that is now our greatest concern," said the WHO's director-general, Tedros Adhanom Ghebreyesus. "We are at a decisive point."

He repeated the call for nations to seize the window of opportunity and said those that reported cases for the first time should "act aggressively now".

"You can contain this virus," he said. "You can prevent people getting sick. You can save lives. So, my advice to these countries is to move swiftly."

"And it must be preparing for all of those scenarios at the same time," he said.

Tedros warned that no country should assume it will not get cases.

"That would be a fatal mistake, quite literally," he said.

And he noted that the virus does not respect borders, does not distinguish between races or ethnicities, and has no regard for a country's GDP or its level of development, citing the outbreak in Italy, a member of the G7 where there have been hundreds of cases and more than a dozen deaths.

Tedros said the key is for nations to not only work to prevent cases being imported into their territory but to also be ready to deal with cases when they have them.

The WHO is expecting to issue updated surveillance guidance and case definitions for COVID-19 based on what it has learned so far, according to Michael Ryan, executive director of the WHO's Health Emergencies Program.

Maria Van Kerkhove, technical lead with the program, has just returned from two weeks in China and said the lessons learned by Chinese health workers will be shared with the rest of the world, something, she said, that has been happening from the start.

On Thursday, the European Union announced that no EU member state has called for checks on entry to the visa-free Schengen travel zone due to the COVID-19.

Italy is the worst-hit European country. Authorities reported a total of 528 cases on Thursday, according to the WHO.

The worst-affected areas are in the industrial north of the country — Lombardy, the region around Milan, and Veneto near Venice.

Several countries, including Austria, Croatia, Greece and Switzerland, reported that they have cases involving people who had been to Italy, as did Algeria in Africa.

In France, President Emmanuel Macron told Agence France-Presse on Thursday that the country is on the verge of a coronavirus epidemic.

"We are facing a crisis, an epidemic, that is coming," he said as he visited a Paris hospital treating patients infected with the virus.

His visit to the Pitie-Salpetriere Hospital came after it recorded the first COVID-19 death of a French national on Wednesday. The French Health Ministry's website currently lists 18 COVID-19 cases in the country, according to Politico.