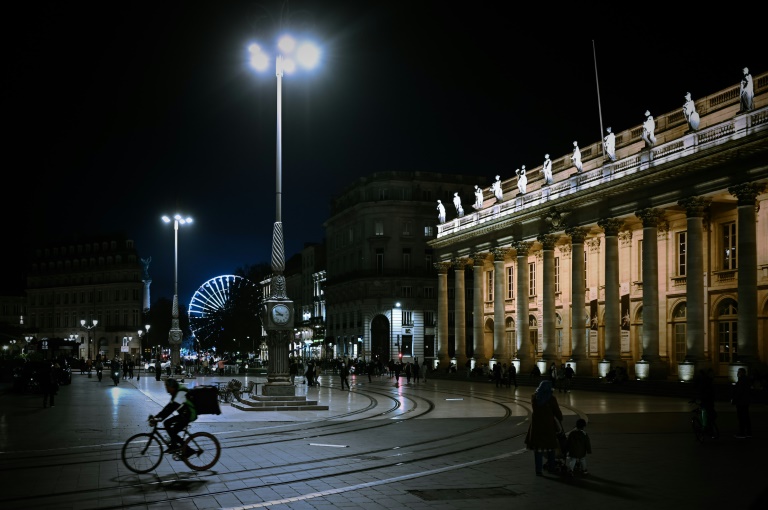 A French cyclist heads home past Le Grand Théâtre de Bordeaux before the nighttime curfew imposed in Paris and several other cities in France, where coronavirus cases are soaring. (File photo: AFP)

The coronavirus crisis is likely to take an even bigger toll on the French economy this year than in 2020, Finance Minister Bruno Le Maire warned Thursday, promising to continue supporting the hardest-hit sectors.

"The hardest is still to come, we're going to have to show considerable strength of character," Le Maire said in a video conference with the Institut Montaigne think-tank.

His comments came as Prime Minister Jean Castex prepares to outline efforts to speed up vaccinations and possibly tougher measures to curb infections as the number of new cases continues to grow.

Authorities reported 25,379 new daily cases and 291 deaths on Wednesday, with experts warning of a coming surge in the wake of extensive family travel over the holidays.

"We are dealing with a virus that isn't going away," Le Maire said.

"There will be more bankruptcies in 2021 than in 2020... which will result in job losses over a certain period that will be difficult to absorb."

The government has forecast economic growth of six percent this year, after an expected nine percent plunge last year.

France has spent billions of euros to limit job cuts and keep businesses from going under, in particular hotels and restaurants, cinemas and other cultural institutions, and the sports sector.

Restaurants and hotels, which are pushing to increase aid packages to three million euros per business, had been hoping to be allowed to reopen on January 20.

But officials have indicated that they are likely to remain closed as authorities brace for tougher Covid-19 restrictions, similar to those taken recently in England or Germany.

"We are not going to let them fail, we will spend the money that is necessary," Le Maire said.