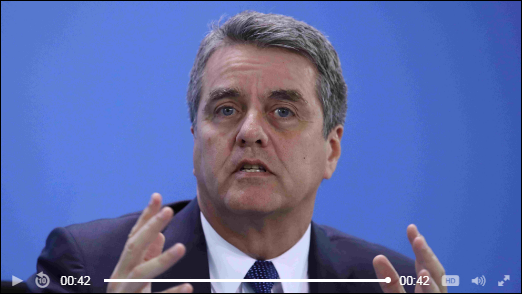 The World Trade Organization (WTO) Director General expressed concerns on the current global trade situation during an interview, saying that global trade is under threat.

"Global trade is under threat. Whether or not you call the current situation a trade war, certainly the first shots have been fired. This calls for our attention, and most importantly, our action," said Roberto Azevedo during an interview by China's state-run China Daily newspaper.

"The situation is extremely serious. Reciprocal trade restrictions cannot be the new normal. A continued escalation would risk a major economic impact, threatening jobs and growth in all countries, hitting the poorest the hardest."

He also warned earlier that trade restrictions may become a "new normal" in the near future because it will lead to a drastic decrease in trade and jobs and will have the worst effect on the developing countries which are least able to protect themselves against a trade war.

According to the WTO, lower export orders and car sales are likely to slow world trade growth in the third quarter as its quarterly outlook indicator dipped to 100.3 from the 101.8 predicted in May for the second quarter.