WORLD WWII: A memory battleground on the 80th anniversary

WWII: A memory battleground on the 80th anniversary 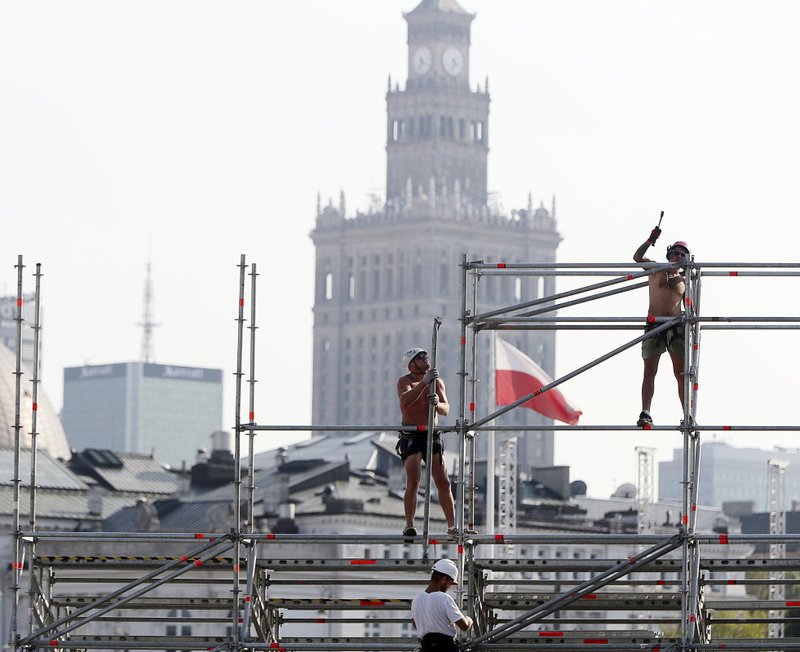 Workers erect a stage ahead of upcoming ceremonies marking the 80th anniversary of the start of World War II, in Warsaw, Poland on Aug. 28, 2019. (Photo: AP)

Commemorations marking the 80th anniversary of the start of World War II in Poland this weekend come as the war has become a messy battleground of memory.

In Poland and across Eastern Europe, many feel that their people’s suffering has never been adequately recognized, or that they have been unfairly tarnished for their behavior at that time — grievances politicians have been exploiting in a new era of nationalism.

For Americans and others, World War II might seem a black-and-white story of good defeating evil, with the Allies fighting far from home to defeat Adolf Hitler’s genocidal regime and open a new era of peace and liberty.

But from the Baltics and Poland to Hungary and Russia, where fighting, deportations and mass executions happened, there are many shades of gray: heroic resistance and martyrdom but also collaboration — and a liberation by Soviet forces that spelled the start of decades of occupation and oppression for those behind the Iron Curtain.

That leaves a lot of room for differing ways to remember the war.

Sunday marks exactly 80 years since Nazi Germany invaded Poland, on Sept. 1, 1939, the attack that triggered a nearly six-year world conflict that left more than 70 million people dead before Germany and Japan surrendered in 1945.

US President Donald Trump had been expected to attend but canceled to stay home and deal with a hurricane barreling toward Florida, tapping Vice President Mike Pence to replace him. Others leaders who are attending include German Chancellor Angela Merkel and Ukrainian President Volodymyr Zelenskiy.

“The anniversary celebrations are to be a warning to the world — about the necessity of peace, about the sovereignty of states, about not negotiating at the expense of others,” said Krzysztof Szczerski, top aide to Polish President Andrzej Duda.

Notably absent will be Russian President Vladimir Putin, who attended 70th anniversary commemorations in Poland in 2009 amid an attempted Russia-Western thaw at that time. He was not invited this time because of his annexation of Ukraine’s Crimean Peninsula, and is all the more unwelcome due to a Russian rehabilitation in recent years of the Stalinist era.

In Moscow, some saw Trump’s cancellation as part of a wider problem with the ceremonies.

Two weeks after Germany invaded Poland in 1939, the Soviet Union invaded Poland from the east, with Adolf Hitler and Josef Stalin carving up Poland and the Baltic states based on a secret protocol in the Molotov-Ribbentrop pact signed Aug. 23, 1939.

In 2009, Putin said that all pacts made with the Nazis “were unacceptable from the moral point of view.” But since then, Russia has returned to an earlier insistence that the USSR shares no responsibility for starting the war. Russian schoolchildren are taught that what Russia calls the “Great Patriot War” began not in 1939, but in 1941, when Nazi Germany attacked the Soviet Union.

This week the Russian government put out a video that seeks to rehabilitate the pact, arguing that the USSR was forced into it by the failure of the West to stand up to Hitler’s aggression and even blaming Poland for the war.

“Today there are, unfortunately, many trying to falsify history,” Duda said recently. “They suggest that, in fact, World War II began in 1941. No — the war began with the Nazi-Soviet invasion of Poland in September 1939 based on the arrangements of the Molotov-Ribbentrop Pact.”

By war’s end, nearly 6 million Polish citizens had been killed, 3 million of them Polish Jews who made up half of all the European Jews killed in the Holocaust.

Unlike other countries occupied by Germany at the time, Poland never had a collaborationist government. The prewar Polish government and military fled into exile, except for an underground resistance army that fought the Nazis inside the country.

Duda and the other nationalist leaders in charge today often stress that heroism — but they too are accused of twisting war memories for political gain, with a tendency to focus only on the good and play down uncomfortable chapters of that era.

Since the Law and Justice party came to power in 2015, it has pushed out the director of the new Museum of the Second World War in Gdansk and changed the exhibition to push a narrative more focused on Polish suffering and heroism, finding the original concept — launched under a more liberal government — too international in spirit. One example includes a video in the exhibition that historians say is so selective in the facts that it amounts to propaganda.

The party also passed legislation in 2018 making it illegal to falsely claim that Poland as a nation collaborated in the Holocaust. The law caused a huge international controversy because it was perceived as an attempt to suppress debate into cases where individual Poles denounced or killed Jews, even though the government insists that was never the intention.

Duda and Prime Minister Mateusz Morawiecki over the past two years have also paid respects to a far-right Polish resistance movement, the Holy Cross Mountains Brigade , which collaborated with Nazi Germany toward the end of the war in its struggle against the Communists taking power then.

Pawel Machcewicz, a historian and the museum director pushed out in Gdansk, called it “outrageous and shocking” that leaders today would pay tribute to a fringe collaborationist unit.

“This is about courting the most extreme neo-fascist groups in Poland today. They are not more than 5 to 6 percent of voters, but this small percentage could be crucial in the outcome of the next election,” Machcewicz said.