Granit Xhaka and Xherdan Shaqiri scored in Switzerland’s 2-1 victory over Serbia on Friday at the World Cup, and both celebrated by making a nationalist symbol to their ethnic Albanian heritage.

In the tournament’s first come-from-behind victory, Xhaka made it 1-1 in the 52nd minute with a powerful shot through a crowded penalty. Shaqiri added the other in injury time after running past the Serbian defense.

Both put their open hands together with their thumbs locked and fingers outstretched to make what looks like the double-headed eagle displayed on Albania’s national flag. The thumbs represent the heads of the two eagles, while the fingers look like the feathers.

The gesture is likely to inflame tensions among Serb nationalists and ethnic Albanians.

Shaqiri was born in Kosovo, the former Serbian province that declared independence in 2008. Serbia doesn’t recognize Kosovo’s independence and relations between the two countries remain tense. Xhaka’s parents are originally from Kosovo and they are of Albanian heritage.

Aleksandar Mitrovic scored for Serbia with a header in the fifth minute.

The win puts Switzerland into second place in Group E with four points, the same as Brazil. The Swiss will advance to the round of 16 if they beat Costa Rica on Wednesday in Nizhny Novgorod. Serbia will face Brazil in Moscow at the same time. 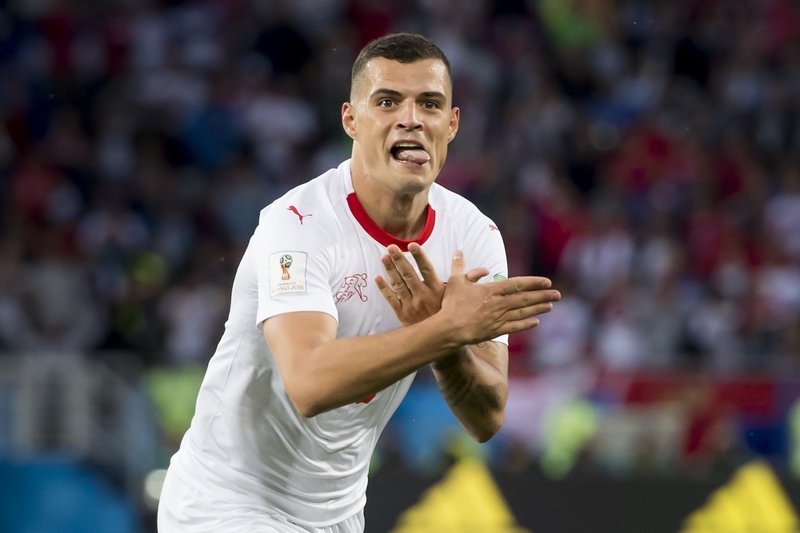