Chairwoman of Federation Council on visit

China and Russia should cherish their strategic partnership and support each other as they always do to safeguard their core interests, President Xi Jinping said on Wednesday.

Xi made the remark while meeting with Valentina Matviyenko, chairwoman of the Federation Council of Russia, at the Great Hall of the People in Beijing. 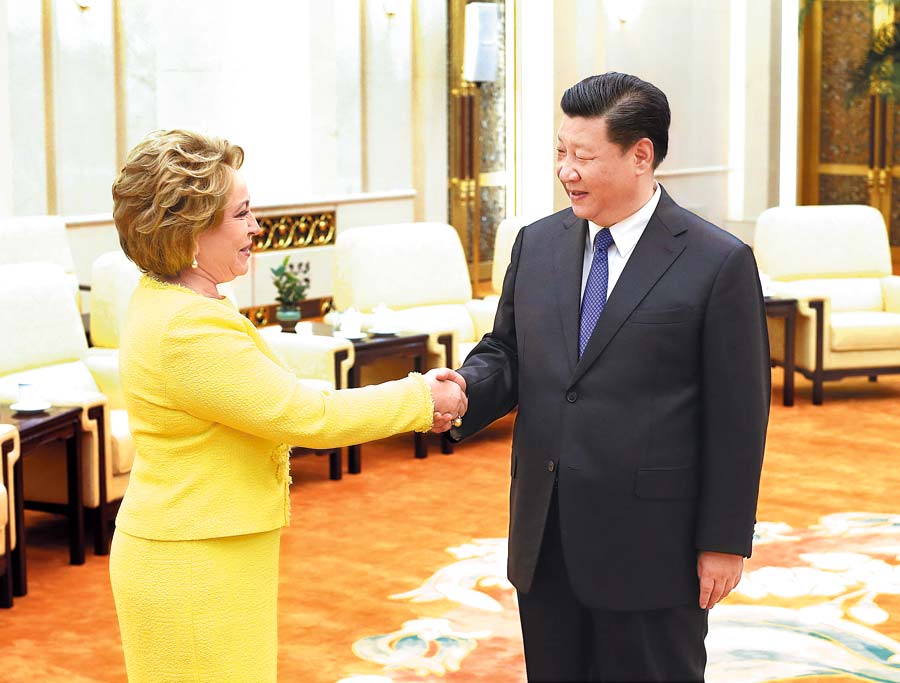 Chinese President Xi Jinping (right) meets with Valentina Matviyenko, chairwoman of the Federation Council of Russia, at the Great Hall of the People in Beijing on Wednesday. The council is the upper house of the Federal Assembly, Russia’s legislature. (Photo: Feng Yongbin/China Daily)

Xi said he and Putin exchanged views on a series of important issues and reached important consensus during Putin’s state visit to China and participation in the Shanghai Cooperation Organization summit held in Qingdao, Shandong province.

The development of bilateral ties has always been on the right track, Xi added.

Xi said he expected to meet Putin again during the BRICS Summit to be held in South Africa later this month.

Xi pointed out that the China-Russia relationship is at its best period of history, which has set an example for exchanges between major and neighboring countries.

Both countries have completed their important domestic political agendas this year, Xi said, adding that this has laid the basis for the fulfillment of national revitalization.

The president called on the two nations to implement the cooperation consensus reached by the two leaders, keep innovating ideas on cooperation and push cooperation in all areas to bring benefits for people of both nations.

Cooperation between legislative authorities is an important part of bilateral ties, Xi said.

The legislative authorities of the two countries are expected to enhance exchanges and learn from each other on such issues as governance and supervision, Xi said.

Calling Matviyenko an old friend of the Chinese people, Xi said that she has been dedicated to the development of China-Russia relations and has made contributions to pragmatic cooperation between the two countries.

It is an important task for the two countries to implement the consensus reached by the two leaders, she said, adding that the legislative authorities are prepared to help advance cooperation.

The Federation Council of Russia would like to enhance cooperation with the National People’s Congress of China, exchange experiences on legislation and push forward cooperation in all areas, she said.