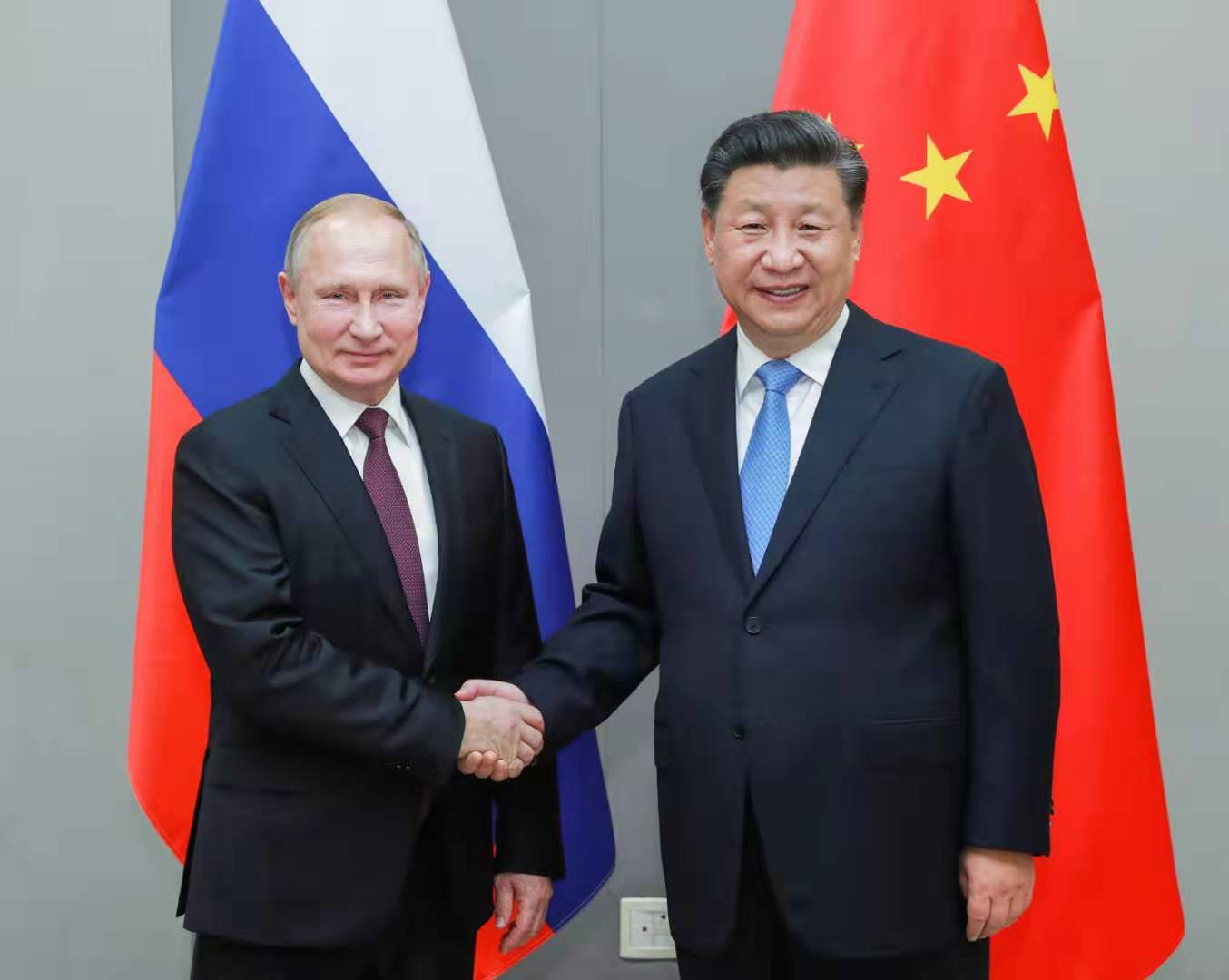 BRASILIA, Nov. 13 (Xinhua) -- Chinese President Xi Jinping met with Russian President Vladimir Putin here on Wednesday, calling for maintaining a positive and sound momentum of the development of China-Russia relations at a high level.
Xi spoke of the importance of the year 2019 as the one in which China-Russia relations, which are developed on past achievements, forge ahead. The two sides celebrated the 70th anniversary of the establishment of diplomatic ties with a series of activities, and the year of China-Russia local cooperation and exchange is coming to a successful end, he said.
"In particular, we jointly announced the development of China-Russia comprehensive strategic partnership of coordination for a new era, pushing bilateral relations to a new historical height," Xi said.
Xi stressed that the two sides should continue to make joint efforts, keep in mind the development and changes in the international situation, make innovations answering the needs of each country's development and bilateral cooperation, maintain a positive and sound momentum of the development of China-Russia relations at a high level, and constantly make new achievements to bring more benefits to the two peoples, the region and the world.
Noting the complex and profound changes in the current international situation with rising instability and uncertainty, Xi urged China and Russia to establish closer strategic coordination to uphold the basic norms governing international relations, oppose unilateralism, bullying and interference in other countries' affairs, safeguard their respective sovereignty and security, and jointly create a fair and just international environment.
Speaking of the just-concluded second China International Import Expo, Xi said the transaction volume of Russian exhibitors grew by 74 percent compared with that in last year.
He stressed the need to continuously expand two-way trade and expressed the hope to see more big strategic projects of the two countries in the energy sector with the China-Russia east-route natural gas pipeline project expected to start operating soon.
Xi also expressed the wish for fruitful outcomes of the China-Russia year of scientific and technological innovation from 2020 to 2021, and called for new continuous progress in the alignment of the Belt and Road Initiative (BRI) and the Eurasian Economic Union.
Pointing out that the BRICS summit this year is being held at a critical juncture that the international landscape is evolving and global governance is under transformation, Xi said China and Russia should work together to promote solidarity and cooperation among all parties and send a positive signal that BRICS countries adhere to multilateralism and uphold multilateral trading system.
Xi also pledged full support for Russia to host the BRICS summit and the Shanghai Cooperation Organization (SCO) summit next year.
Putin said that Russia-China relations are solid and stable, unaffected by any external factors, and enjoy a sound development momentum and broad prospects.
Russia-China relations are based on profound friendship and mutual trust, close political coordination, mutually beneficial economic cooperation and close coordination on international stage, Putin said, calling such relations a true comprehensive strategic partnership of coordination.
Putin said Russia and China share important consensus and common interests in maintaining global strategic security and stability. The two sides should continue to maintain close strategic communication and firmly support each other in safeguarding sovereignty, security and development rights and interests, he said.
Russia has the confidence to further enhance the scale and level of bilateral trade, accelerate the alignment of the Eurasian Economic Union with the BRI, deepen cooperation with China in industry, agriculture, aerospace, energy and finance, and increase natural gas export to China, Putin said.
The two sides should continue to strengthen cultural and people-to-people, as well as local government level exchanges, he added.
Assuming the BRICS rotating presidency next year, Russia will work closely with China to enhance the influence of the BRICS cooperation mechanism, Putin said, adding that Russia is also ready to strengthen cooperation with China within the SCO framework, especially on security and counter-terrorism.
The two heads of state also had in-depth exchanges of the views on major international and regional issues of common concern.
Xi arrived in the Brazilian capital on Tuesday night for the 11th BRICS summit.