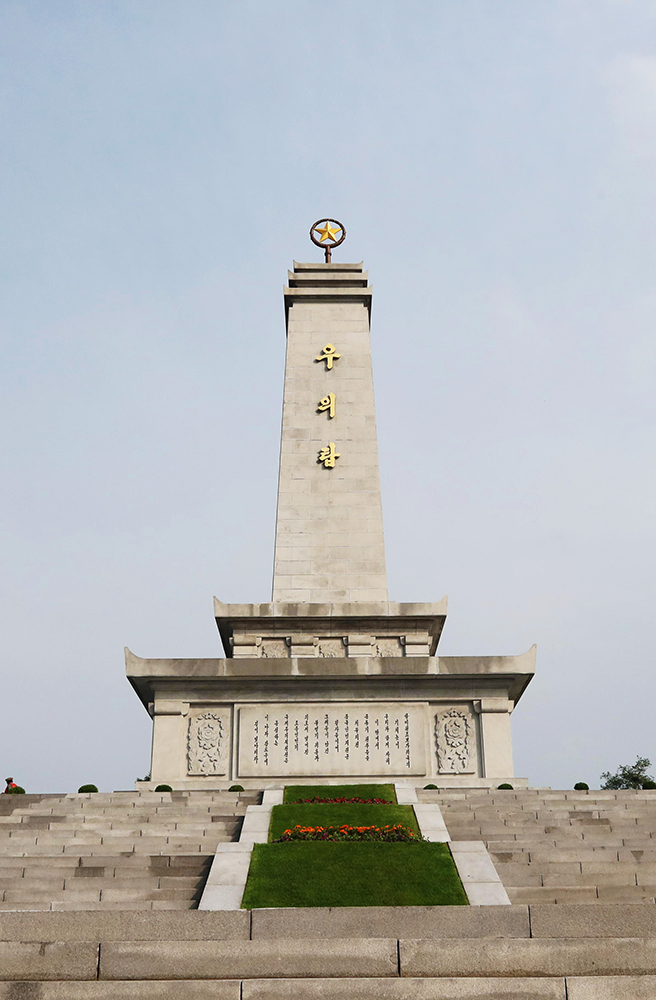 At 10 am local time, Xi, also general secretary of the Central Committee of the Communist Party of China, and his wife, Peng Liyuan, arrived at the tower in downtown Pyongyang, and were greeted by Kim Jong Un, chairman of the Workers' Party of Korea and chairman of the State Affairs Commission of the Democratic People's Republic of Korea (DPRK), and his wife, Ri Sol Ju.

After the national anthems of China and the DPRK were played and the flower basket was laid by honor guards, Xi stepped forward to arrange the ribbon, which reads "The martyrs of the Chinese People's Volunteer Army are immortal."

Afterwards, all present paid silent tribute to the martyrs.

Xi also visited the exhibition hall of the tower and wrote down in the inscription book "To remember the martyrs" and "The China-DPRK friendship lasts from generation to generation."

During the visit, Xi said we should remember the martyrs and review the glorious history of the older generations who fought side by side.

He also encouraged future generations to remember and inherit the traditional friendship between China and the DPRK.

Xi said the tribute paid to the tower also demonstrates the firm determination of China and the DPRK to maintain peace.

He urged the two sides to pass on the China-DPRK friendship from generation to generation, consolidate and develop the socialist cause of the two countries, better benefit the two peoples and promote regional peace, stability, development and prosperity.

For his part, Kim said that the party, government and people of the DPRK will always remember the heroic sacrifices made by martyrs of the Chinese People's Volunteer Army in DPRK's resistance against aggression.

The party, government and people of the DPRK, Kim said, will continue to inherit and develop the friendship between the DPRK and China, strengthen bilateral cooperation, and promote new and greater achievements in bilateral relations.