Chinese President Xi Jinping delivers a speech at a gathering in celebration of the 20th anniversary of Macao's return to the motherland, in Macao, south China, Dec. 20, 2019. (Xinhua/Ju Peng)

Xi made the remarks while addressing a gathering in celebration of the 20th anniversary of Macao's return to the motherland.

Xi urged the SAR government to keep apace with the times and improve governance of the region.

He called for steady efforts to improve the set of institutions for the law-based governance of Macao and expedite the building of a smart city.

Information technologies, including big data, can be used to improve the modes of government running and social governance to ensure that the decision making by the government is well-conceived and public services are efficient, Xi said.

Xi urged Macao to push ahead in promoting sustainable, healthy development of its economy. 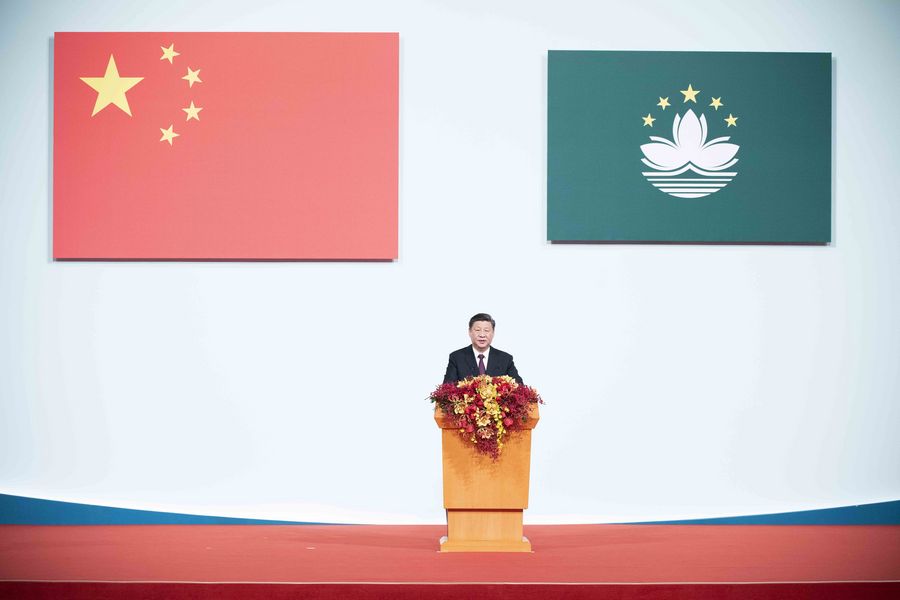 Chinese President Xi Jinping delivers a speech at a gathering in celebration of the 20th anniversary of Macao's return to the motherland, in Macao, south China, Dec. 20, 2019. (Xinhua/Li Tao)

Macao should step up long-term planning and coordination and steadily carry out plans for building the region into a world tourism and leisure center, a commercial and trade cooperation service platform between China and Portuguese-speaking countries, and a base for exchange and cooperation where Chinese culture is the mainstream and diverse cultures coexist, he said.

Macao should focus on the aspects and major projects, which are selected based on the region's conditions and well-conceived procedures, in order to appropriately diversify its economy, Xi said.

The SAR should grasp the opportunities brought by the building of the Belt and Road and the Guangdong-Hong Kong-Macao Greater Bay Area, Xi said.

"For now, particularly, efforts should be made in terms of cooperation between Macao and neighboring Zhuhai for the development of Hengqin, which will broaden space and create new driving force for Macao's long-term development," he said.

He urged the SAR government to further promote social harmony and stability by upholding the prevalent value of "loving the motherland, loving Macao" and carrying forward the fine tradition of promoting social solidarity and coordination.