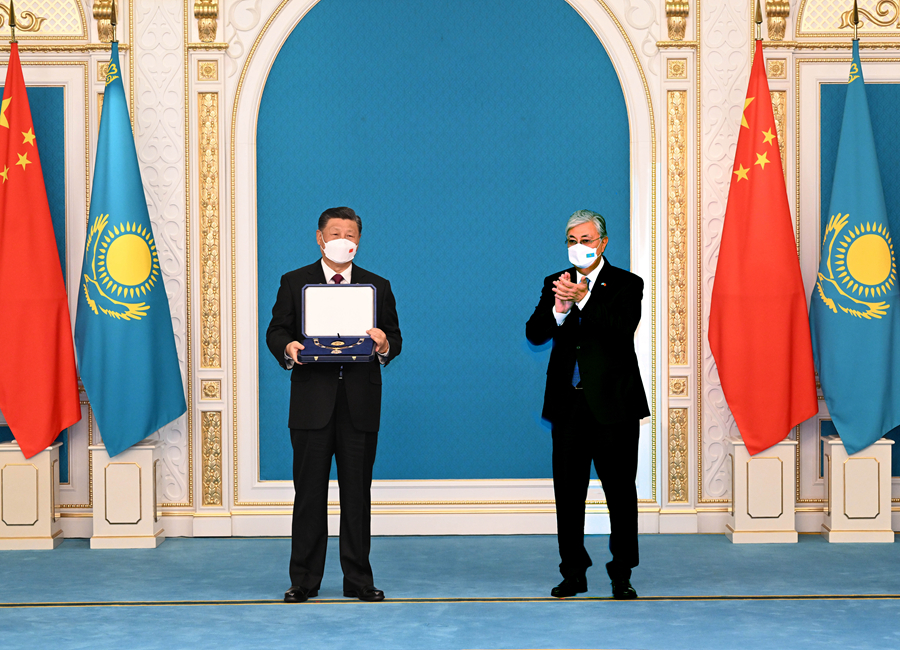 In the splendid marble hall of the palace, national flags of China and Kazakhstan lined up neatly, filling the room with a warm and dignified atmosphere.

Tokayev delivered remarks before awarding the order. He noted that the visit of Xi today, the great Chinese president, is a tremendous honor for Kazakhstan.

President Xi is a genuine great leader who has the wholehearted support of the Chinese people, Tokayev said, adding that under the remarkable leadership of Xi, China has made enormous development progress, eradicated extreme poverty, and built a moderately prosperous society in all respects, and the Chinese nation is marching on a new journey toward great rejuvenation.

He said he believes that under the wise leadership of Xi, China will realize the grand goal of fully building a modern socialist country as scheduled.

Xi put forward the great initiatives including Belt and Road cooperation and the building of a community with a shared future for mankind, and has made outstanding contribution to building a new type of international relations, Tokayev said, adding that the Global Development Initiative and the Global Security Initiative put forward by Xi are of particular strategic significance in resolving risks and challenges faced by today's world.

Kazakhstan is ready to work with China to advance shared prosperity and development of the two countries, deliver for the wellbeing of the two peoples, and join hands to create an even brighter future, he said.

Tokayev awarded the Order of the Golden Eagle to Xi. The two heads of state took pictures together.

Delivering remarks upon receiving the order, Xi described Tokayev's awarding him the order as a demonstration of the great importance Kazakhstan places on China-Kazakhstan ties and the reservoir of goodwill of the people of Kazakhstan towards the people of China.

Over the past three decades since the establishment of diplomatic ties, China-Kazakhstan relations have kept growing on a high level, Xi said, adding that the two sides have cemented political trust, cooperation has flourished in various fields, efforts to promote high-quality Belt and Road cooperation have delivered fruitful results, and the two sides have also engaged in close coordination in international affairs, all of which have provided strong support to the development and rejuvenation of both countries and injected strong impetus into regional peace and stability.

A bright future lies ahead for the lasting friendship, win-win cooperation and shared prosperity between the two countries, Xi said.

Xi said that he deeply cherishes the order, which symbolizes the friendship between the two peoples, and shared his conviction that with the concerted efforts of both sides, China-Kazakhstan relations will soar high and fly far like a golden eagle and deliver more benefits to the people of the two countries.

The Order of the Golden Eagle is the highest order of Kazakhstan awarded to individuals in recognition of their significant contribution to Kazakhstan's national development and friendly external relations.

Ding Xuexiang, Yang Jiechi, Wang Yi and He Lifeng, among others, attended the ceremony.