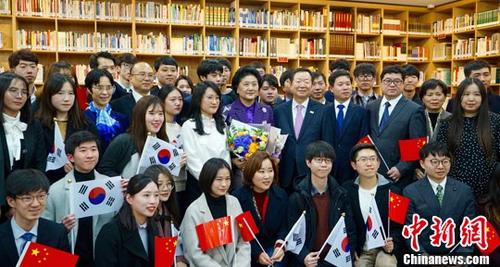 China and South Korea should take the 10th anniversary of the establishment of their strategic cooperative partnership as an opportunity to earnestly implement the consensus reached by and between the heads of state of the two countries, Liu said.

Liu met with Moon after attending the Feb. 25 closing ceremony of the 2018 PyeongChang Winter Olympics. She noted that the attendance to the Feb. 9 opening ceremony by Xi's special envoy Han Zheng, a member of the Standing Committee of the Political Bureau of the Communist Party of China Central Committee, and her presence at the closing ceremony well reflect China's support for the PyeongChang games and the importance China attaches to its relations with South Korea.

During the meeting with Moon, Liu said China and South Korea should keep boosting mutual trust, launch mutually beneficial cooperation, strengthen exchange in education, science and technology, culture, sports, public health and other fields of humanities, and properly handle sensitive issues, in order to consolidate the political basis and the basis of public opinions for long-term stable development of relations between the two countries.

On the Korean Peninsula issue, Liu recalled that South Korea and the Democratic People's Republic of Korea (DPRK) took the PyeongChang Olympics as an opportunity to restart dialogue and interaction, revealing the common aspiration for peace of the people on the Korean Peninsula.

China is dedicated to peaceful solution of the Korean Peninsula issue through dialogue and consultation, Liu said.

Liu expressed the hope that the South Korean side will enhance confidence, eliminate interferences, keep promoting continued improvement of relations between the south and the north, and keep the current momentum of detente, in striving to make progress in peace talks.

China will continue to play a positive and constructive role on the issue, she added.

For his part, Moon thanked China for its special arrangement and great support for the successful holding of the PyeongChang Olympics and wished the 2022 Beijing Winter Olympics a success.

Moon said that the South Korean side wishes to strengthen exchange and cooperation between the two countries in all fields, and expects China to continue extending support and cooperation in terms of promoting the south-north dialogue on the Korean Peninsula and the DPRK-US dialogue.

During her stay in South Korea, Liu on Sunday met with International Olympic Committee (IOC) President Thomas Bach, saying China will fully honor its commitment to the 2022 Beijing Winter Olympics, and will manage to turn the Beijing Winter Olympics into "splendid, fantastic and extraordinary" Games in adherence to the idea of holding "green, sharing, open, and honest and clean" Olympic Games.

Regarding the PyeongChang Olympics, Liu said that, under the complex and sensitive circumstances on the Korean Peninsula, the successful holding of the PyeongChang Games well reflected the Olympic spirit which champions peace, friendship and cooperation, and the power and the irreplaceable role of sports in safeguarding world peace and promoting friendships among peoples.

Bach, for his part, thanked China for its consistent support for the work of the IOC and strong support for South Korea in making the PyeongChang Olympics a success.

He expressed the belief that China will deliver a successful 2022 Winter Olympics, repeating the wonder of the 2008 Beijing Summer Olympics.