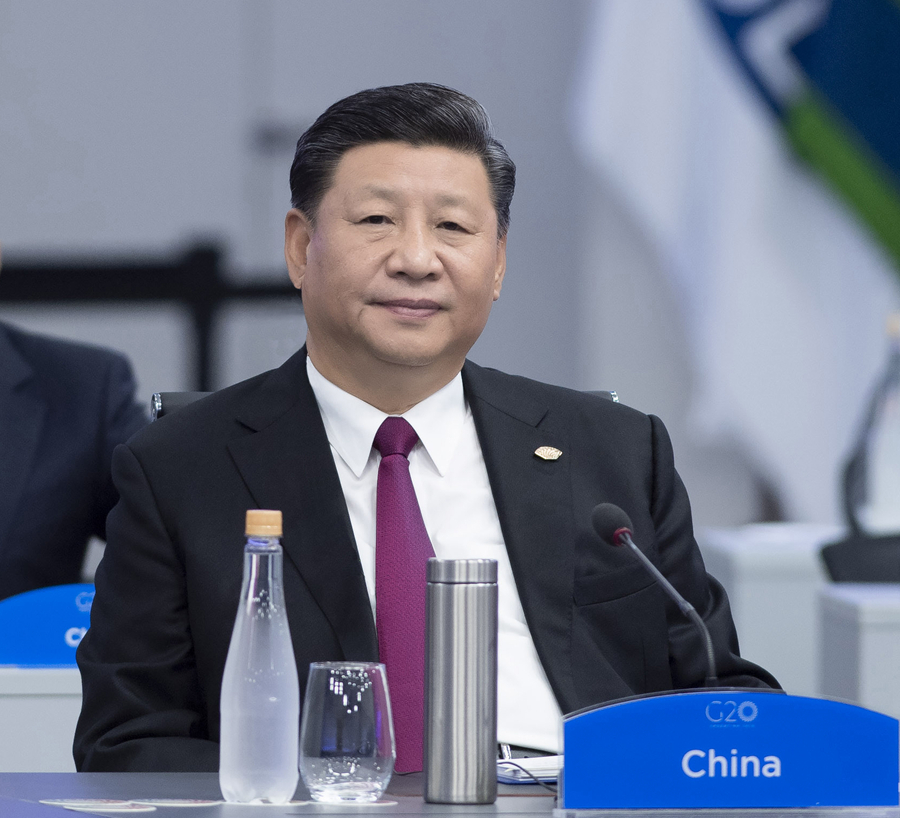 Xi made the remarks while addressing the 13th G20 summit in the Argentine capital of Buenos Aires.

He warned the G20 leaders of accelerated accumulation of risks in global economy and pledged that China will firmly push forward a new round of reform and opening-up, with increased efforts in intellectual property rights (IPR) protection and more imports.

Noting that it has been 10 years since the global financial crisis broke out and the first G20 summit was convened, the Chinese president said the global economy today, while maintaining growth on the whole, is still not free from the underlying impacts of the crisis.

Old growth drivers are yet to be replaced by new ones, while various risks are rapidly building up, he said, adding that the world economy is facing another historical choice.

"We G20 members must closely follow the underlying historical trend so as to chart the course for the future. In mankind's relentless quest for development and progress, the trend toward openness and integration among countries is unstoppable despite ups and downs in the global economy," Xi said.

Greater coordination and complementarity among countries meet the need of productivity growth and will also shape the future of relations of production, he said.

In this process, countries are increasingly becoming a community with shared interests, shared responsibilities and a shared future, Xi said, stressing that win-win cooperation is the only choice going forward.

"Facing various challenges, we must have a stronger sense of urgency, be rational in approach and look beyond the horizon. We must fulfill our responsibility and steer the global economy in the right direction," he told the G20 leaders.

Noting that the G20 was born out of the international community's need to maintain stable growth of the global economy, Xi said the group has braced difficulties together, navigated the global economy out of recession and brought it back to the track of recovery and growth over the past decade.

"Ten years later, let us work with the same courage and strategic vision and ensure that the global economy grows on the right track," he said, putting forward a four-point proposal to the summit.

Firstly, Xi called on G20 members to stay committed to openness and cooperation and uphold the multilateral trading system.

"We should firmly uphold free trade and the rules-based multilateral trading system," he said.

China supports necessary reform of the World Trade Organization, and believes that it is critical to uphold the WTO's core values and fundamental principles such as openness, inclusiveness and non-discrimination and ensure the development interests and policy space of developing countries, according to the Chinese president.

During the process, all sides need to conduct extensive consultation to achieve gradual progress, he said.

All participating sides should employ the three tools of fiscal and monetary policies and structural reform in a holistic way to ensure strong, balanced, sustainable and inclusive growth of the global economy, Xi said.

Developed economies, when adopting monetary and fiscal policies, should give more consideration to and work to minimize the impact such policies may exert on emerging markets and developing economies, he said.

The international monetary system should become more diversified, and the global financial safety net should continue to be strengthened, he added.

Thirdly, the G20 should stay committed to innovation and create new momentum for growth, Xi said.

He called on the group to encourage innovation and leverage the role of the digital economy in growing the real economy.

"We need to watch out for risks and challenges brought by the application of new technologies, and strengthen the legal and regulatory framework," Xi said, adding that more efforts are needed to boost education and vocational training.

"We should give priority to achieving development through fully tapping our innovation potential. At the same time, we also need to keep our doors open and encourage the spread of new technologies and knowledge so that innovation will benefit more countries and peoples," said the Chinese president.

To better adapt to and guide technological innovation, Xi proposed that the G20 carry out an in-depth study on the application and impact of new technologies on a priority basis to explore new thinking and new ways of cooperation in this area.

"We need to continue to follow a people-centered development philosophy and endeavor to deliver a sense of fulfillment, happiness and security to our people," Xi said.

He encouraged the G20 members to continue to prioritize development in global macro-policy coordination, implement in real earnest the 2030 Agenda for Sustainable Development and give strong support to work in this area within the UN framework.

Calling on the group to protect the development interests and space of developing countries, Xi said the G20 should also continue to support Africa's development by helping Africa with its infrastructure and connectivity building and new industrialization.

Noting that this year marks the 40th anniversary of China's reform and opening-up, Xi recalled that during the past 40 years, with the support of the international community, the Chinese people have forged ahead with perseverance and made historic achievements in development.

China owes its progress to reform and opening-up, and will continue to advance on this path, Xi told the G20 leaders, pledging to continue to deepen market-oriented reform, protect property rights and IPR, encourage fair competition and do more to expand imports.

China will continue to improve its business environment, and hopes that all countries will work together for a free, open, inclusive and orderly international economic environment, Xi said.

The Chinese president arrived in Buenos Aires on Thursday night to attend the G20 summit and pay a state visit to Argentina.

Argentina is the second stop of Xi's Europe and Latin America trip from Nov. 27 to Dec. 5, which had taken him to Spain and also includes state visits to Panama and Portugal.