HAVANA, March 29 (Xinhua) -- Granma, the official newspaper of the Central Committee of the Communist Party of Cuba, highlighted on Monday Chinese President Xi Jinping's remarks in a reply letter to Cuban leaders. 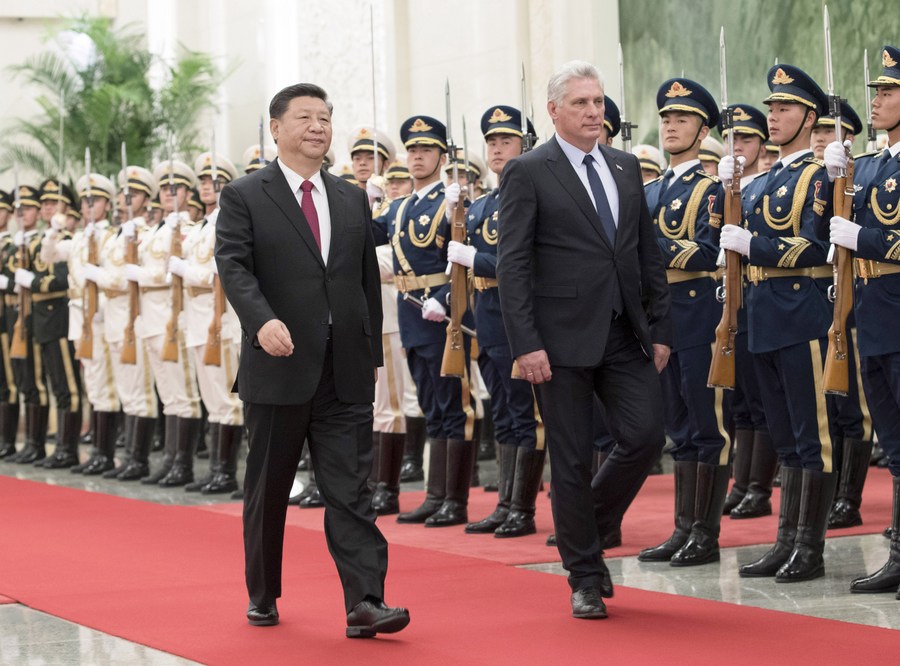 Chinese President Xi Jinping (L, front) holds a welcoming ceremony for Cuban President Miguel Diaz-Canel before their talks at the Great Hall of the People in Beijing, capital of China, Nov. 8, 2018. (Photo: Xinhua)

"Xi said that China will, as always, support Cuba in keeping to the path of socialism and push bilateral relations to higher levels," Granma quoted the letter as saying.

Castro and Diaz-Canel wrote to Xi earlier, extending warm congratulations, on behalf of the Communist Party of Cuba, the Cuban government and people, on China's complete victory in poverty alleviation.

The newspaper also reviewed China's remarkable achievements in eradicating absolute poverty, which has met the poverty eradication target set in the United Nations' 2030 Agenda for Sustainable Development 10 years ahead of schedule.

Guided by their leaders, China and Cuba have enjoyed a traditional friendship of good friends, good comrades and good brothers, and their friendly cooperation has undergone all-round development.

Xi made the remarks in congratulatory messages exchanged with Castro and Diaz-Canel to celebrate the 60th anniversary of diplomatic relations between the two countries.

In his message to Castro, Xi noted that bilateral ties have over the past 60 years withstood the vicissitudes of the international situation and grown ever stronger.

Political mutual trust between China and Cuba has been continuously deepened and bilateral practical cooperation has yielded fruitful results, Xi said, adding that the two countries have stood together and joined hands to fight the COVID-19 pandemic, which has raised their traditional friendship to a higher level.

In his congratulatory message to Diaz-Canel, Xi said that since the two countries established diplomatic ties 60 years ago, China and Cuba have forged a profound friendship with mutual understanding, mutual trust and mutual support.

In recent years, China-Cuba friendly cooperation has been deepening in an all-round way, including active collaboration under the Belt and Road Initiative, which has brought concrete benefits to the people of both countries, Xi noted.

In February 2020, Xi talked over phone with Diaz-Canel to compare notes on the ongoing COVID-19 epidemic and how to further promote bilateral ties.

Xi noted that after the outbreak of the coronavirus disease, Castro and Diaz-Canel immediately extended their sympathies to him, and the Cuban president also paid a special visit to the Chinese embassy in Cuba to express support for China.

That, said the Chinese president, has fully demonstrated the profound traditional friendship between China and Cuba.

Diaz-Canel, for his part, said Cuba highly appreciates and firmly supports China's efforts to combat the COVID-19 epidemic and thanks China for providing help and care for Cuban nationals in China.

In November 2018, Xi held talks with Diaz-Canel in Beijing, calling on the two countries to cherish their traditional friendship and write a new chapter in China-Cuba friendly cooperation.