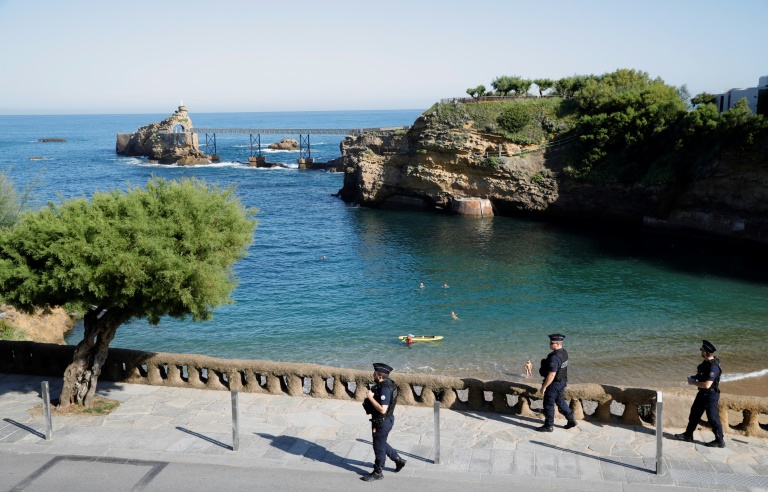 French CRS police patrol in Biarritz, as the resort city is locked down ahead of the G7 summit. (Photo: AFP)

French security forces began locking down the resort town of Biarritz on Friday ahead of this weekend's G7 meeting, with the deployment of 13,000 officers seen as heavy-handed by opponents.

The popular tourist destination in southwest France in the picturesque Basque region is normally basking in its annual summer boom at this time of year.

Instead, its historic centre is now off-limits as US President Donald Trump and other leaders of the world's advanced economies prepare to fly in for three days of talks that start on Saturday.

Surfers have been ordered out of the water on the central beach, the Grande Plage, while the train station and airport are set to close later Friday for the weekend.

"The aim is to have maximum security with a minimum of disruption. We will not tolerate any unrest. If it happens, we will respond," Interior Minister Christophe Castaner said in Biarritz this week.

And even though French authorities have banned demonstrations in Biarritz, there remains fears of violence from anti-government "yellow vests" and anarchists.

A special magistrates' court, with 17 prosecutors and holding cells with capacity for 300 people, has been set up to try anyone caught committing vandalism or fighting with security forces.

Earlier this week, five people including "black bloc" anti-capitalists were arrested for posting messages online encouraging attacks on a hotel accommodating police during the summit.

An authorised demonstration by charities, climate change campaigners and leftist groups will take place on Saturday, but 30 kilometres (20 miles) from the luxury Hotel du Palais in Biarritz where the leaders will gather.

Thousands of people are expected to march from the seaside town of Hendaye over the border to Irun in Spain, where another 3,000 police officers are set to be on duty.

But several "yellow vest" groups, who sprung up in September in opposition to centrist French President Emmanuel Macron, have also promised protests at multiple locations.

Around 2,500 demonstrators and police have been injured in the weekly Saturday protests, while weapons used by the French police including rubber bullets and stun grenades have been criticised by rights groups.

Macron said this week that he wanted to "re-think some of the ways that we intervene."

Other G7 protest groups have promised acts of "civil disobedience", including one which plans to parade official photos of Macron on Sunday in the town of Bayonne that have been stolen from public buildings.

France is keen to keep the focus on the official agenda of tackling global inequalities and climate change, aware that images of violence and burning barricades often steal the headlines at G7 meetings.

Describing the summit on Wednesday, a spokeswoman for the G7 Alternatives protest group, Aurelie Trouve, called it "seven heads of states in their ivory tower surrounded by a staggering police and military presence, cut off from the world."