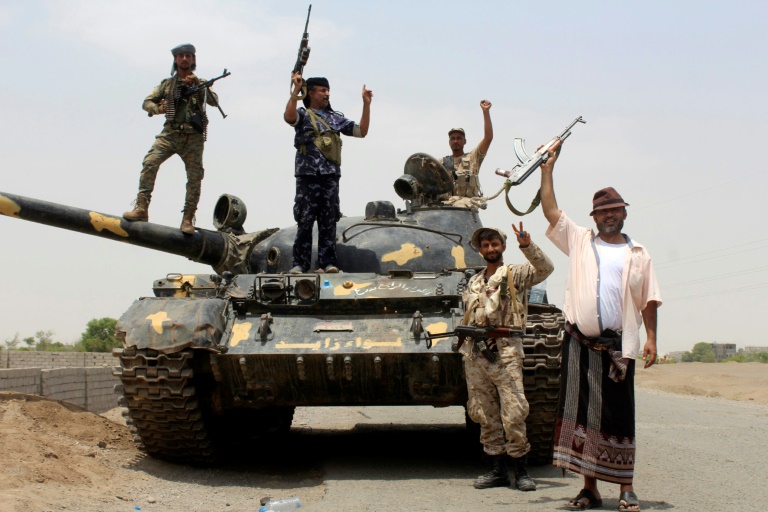 Fighters of UAE-trained Security Belt Force, dominated minated by members of the Southern Transitional Council which seeks independence for South Yemen, patrol in the southern city of Lahj as their comrades say they have regained control of Aden.  (Photo: AFP)

Yemen's government Thursday accused the UAE of launching air strikes against its troops in the interim capital Aden in support of separatists who say they have regained control of the southern city.

The United Arab Emirates has trained and supported secessionists who seek an independent southern Yemen, although it is a key pillar in a Saudi-led military coalition backing the Yemeni government against Iran-aligned Huthi rebels.

"The Yemeni government condemns the Emirati air strikes against government forces in the interim capital Aden and in Zinjibar, which resulted in civilian and military casualties," Deputy Foreign Minister Mohammad al-Hadhrami said in a tweet.

He urged Saudi Arabia "to stand by the legitimate government and stop this illegal and unjustified military escalation".

The fighting has opened a new front in a complex war that has already claimed tens of thousands of lives and sparked what the United Nations calls the world's worst humanitarian crisis.

"The situation is very fragile. Families are again trapped in their homes by fighting, unable to secure food and reach medical care," said the UN humanitarian coordinator in Yemen, Lise Grande.

The UN said at least 13 people were reported to have been killed and 70 wounded during clashes this week.

Doctors Without Borders said that its own teams had received at least 10 victims who were dead on arrival and 41 wounded after heavy fighting in Aden on Wednesday.

The accusation by Yemen's internationally recognised government against the UAE indicates a widening rift between Riyadh and Abu Dhabi, both of which have called for a ceasefire in Aden.

The deputy foreign minister did not say when the alleged air strikes took place.

On Thursday a spokesman for the separatists' Southern Transitional Council (STC) said the UAE-backed Security Belt Forces were in full control of Aden after renewed clashes with government forces.

Fighting also broke out in the city of Zinjibar, the capital of Abyan province, about 100 kilometres (62 miles) from Aden, pro-government and STC sources said Thursday, after government troops withdrew to the area.

The clashes between separatists and government forces -- who for years fought on the same side against the Huthis -- have raised concerns that the famine-threatened country could break apart entirely.

"The Security Belt force completely controls the city of Aden along with its entrances," STC spokesman Haitham Nezar told AFP.

A government security source confirmed Aden was under the full control of the STC, saying government troops who entered parts of the city a day earlier "withdrew from Aden" to Abyan province.

The STC-dominated separatists brought massive reinforcements from other regions, officials from both sides said.

Nezar said the Security Belt forces were now setting their sights on the nearby provinces of Abyan and Shabwa, which had been retaken by government troops earlier this week.

"Our plan is to kick out the invading forces from the south," said Nezar, referring to government forces seen by the separatists as outsiders.

The Yemeni government has also drafted in reinforcements from the north as the two parties appear to be preparing for a major showdown for supremacy in the south of the Arabian Peninsula nation.

STC vice president Hani bin Breik posted pictures of himself and other southern leaders touring the city and the airport.

Bin Breik said that STC forces fighting the Huthis in the north were sent to the south for a major battle.

"We will not remain in the (battle) fronts to liberate the north from the Huthis while the north is invading us," he said.

The STC is fighting to regain the independence of South Yemen which unified with the north in 1990.

Hadi's government said on Wednesday it had seized back Aden from separatists who captured the strategic city on August 10 after a fierce battle that left at least 40 people dead.

The Saudi-led coalition intervened in the war in 2015 in support of the government after the Huthis swept south from their northern stronghold to seize the capital Sanaa and much of Yemen -- the Arab world's poorest nation.