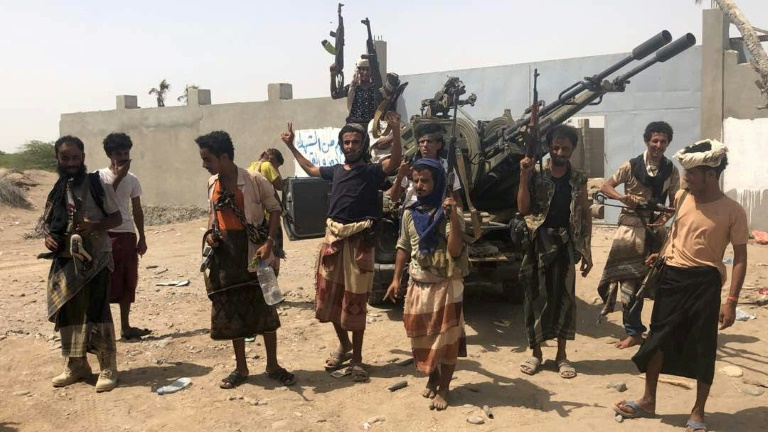 Yemeni pro-government forces backed by United Arab Emirates troops gather on the outskirts of the rebel-held port city of Hodeida on June 18, 2018 in readiness to advance into the city's battleground airport (Photo: AFP)

UAE-backed Yemeni government forces fought their way into Hodeida airport on Tuesday, pressing an offensive that has seen some of the most intense fighting of a three-year war against Shiite Huthi rebels.

The United Arab Emirates, which has US-trained troops fighting alongside the Yemeni army, said the alliance had entered the airport in Hodeida -- a Red Sea port city that is a key aid hub and the entry point for three-quarters of Yemen's imports.

A Yemeni military source confirmed to AFP that troops had entered the rebel base at the disused airport on the southern edge of the city.

Military sources also reported 33 Huthis and 19 soldiers killed in Tuesday's battle, bringing the death toll in Hodeida this week to 216 fighters. No civilian casualties have yet been confirmed.

The battle for Hodeida has sparked fears of a new escalation of the humanitarian crisis in Yemen, which is already teetering on the brink of famine.

The United Nations has warned any attack on Hodeida port could cripple shipments of desperately needed aid to the 8.4 million Yemenis facing imminent starvation.

Hodeida's residents are now bracing for what they fear will be devastating street fighting, as tanks and buses carrying uniformed troops roll through the empty streets of the once-bustling city.

One resident, who asked not to be identified for fear of arrest, said civilians had been "banned from using their phones to take pictures and are questioned about their movements if they're seen in the streets".

The rebels have also begun to dig trenches in the streets, he said.

Fierce fighting in the Hodeida area has already driven 5,200 families from their homes as pro-government forces advanced up the Red Sea coast, according to the UN.

The coalition launched a major offensive on June 13, dubbed Operation Golden Victory, to drive the rebels out of Hodeida, now the most intense battlefront in an already brutal war.

Since Saudi Arabia, the UAE and their regional allies intervened in Yemen in 2015, there have been multiple rounds of UN-brokered peace talks, but they have all failed to achieve any breakthrough.

UN envoy Martin Griffiths has been holding talks in the rebel-held capital Sanaa since Saturday to seek concessions from Huthi leaders that might avoid all-out fighting in the streets of Hodeida. Griffiths appears to have failed to make a breakthrough.

Griffiths told the UN Security Council by video-conference on Monday that he was hopeful a first round of preliminary talks could take place next month, according to two diplomats present at the closed-door session.

But the UN envoy flew out of Sanaa on Tuesday without making any comment to journalists.

The Yemeni government and its allies have insisted that the Huthis must fully withdraw from the city and turn over the port to UN supervision.

The Gulf Arab states accuse their regional arch rival Iran of smuggling arms to the rebels through the port, a charge Tehran denies.

The coalition held a press conference in Abu Dhabi on Tuesday to display what it said were explosives used by the Huthis in Yemen, including landmines and improvised explosive devices described by one UAE official as "a fraction of what the coalition has seized".

The Yemen conflict has killed nearly 10,000 people, most of them civilians, since 2015.

Saudi Arabia, the UAE and their allies joined the Yemen war that year, after President Abedrabbo Mansour Hadi fled into exile as the rebels overran much of the country.

The coalition has helped pro-government forces to regain control of the south and much of the Red Sea coast but the rebels still control Sanaa and most of the north.