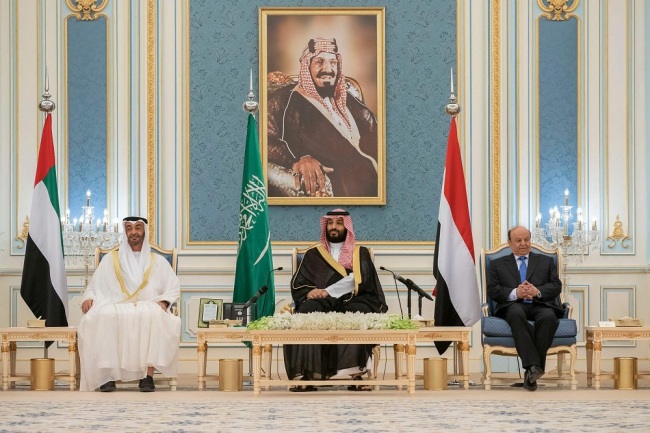 "This agreement will open a new period of stability in Yemen. The kingdom of Saudi Arabia stands with you," Saudi Crown Prince Mohammed bin Salman said at a signing ceremony in Riyadh aired on state television.

"It's a joyful day in Saudi as the two sides come together."

The deal will reportedly see the secessionist Southern Transitional Council (STC) handed a number of ministries, and the government returns to the southern city of Aden, according to officials and reports in Saudi media.

The UN special envoy for Yemen, Martin Griffiths, congratulated the two sides on the deal which he said would propel efforts to end the wider civil war that has devastated the country.

"The signing of this agreement is an important step for our collective efforts to advance a peaceful settlement to the conflict in Yemen," he said in a statement.

"Listening to southern stakeholders is important to the political efforts to achieve peace in the country."

Security Belt Forces -- dominated by the STC -- in August took control of Aden, which had served as the beleaguered government's base since it was ousted from the capital Sanaa by Iran-backed Huthi rebels in 2014.

The clashes between the separatists and government forces, who for years fought on the same side against the Huthis, had raised fears the country could break apart entirely.

The warring factions in recent weeks held indirect talks mediated by Saudi Arabia in the kingdom's western city of Jeddah, which culminated in the deal signed in Riyadh.