Yemen Houthis free detained US citizen, sends him to Oman 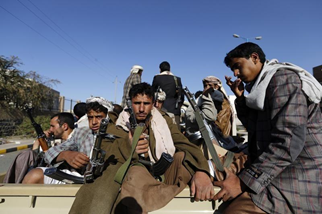 A US citizen held by Yemen’s Houthi group since September last year has been released and taken to Oman aboard a flight that also carried a senior leader of the Iran-aligned group, sources in Sanaa said on Thursday.

Danny Lavon Burch, who works for the Yemeni Safer oil company and is married to a Yemeni citizen, was detained in Sanaa after taking his children to school, according to two colleagues.

Abdel-Salam led Houthi negotiators in failed peace talks with representatives of the internationally-recognized government of President Abd-Rabbu Mansour Hadi, according to the report which was confirmed by a source close to the Houthis.

A Houthi spokesman could not immediately be reached for a comment on the report and US officials were also not available for comment.

Yemeni officials said this week that Houthis officials were due in Muscat soon for a fresh bid to try to restart U.N.-sponsored peace talks held in Kuwait in 2016 but ended without an agreement.

Hadi’s government, backed by a Saudi-led Arab coalition, have been fighting the Houthis who had seized most of northern Yemen in a series of military operations that began in 2014, but little territory has changed hands since then.