Yemen loyalists push deeper into Hodeida as US cuts support 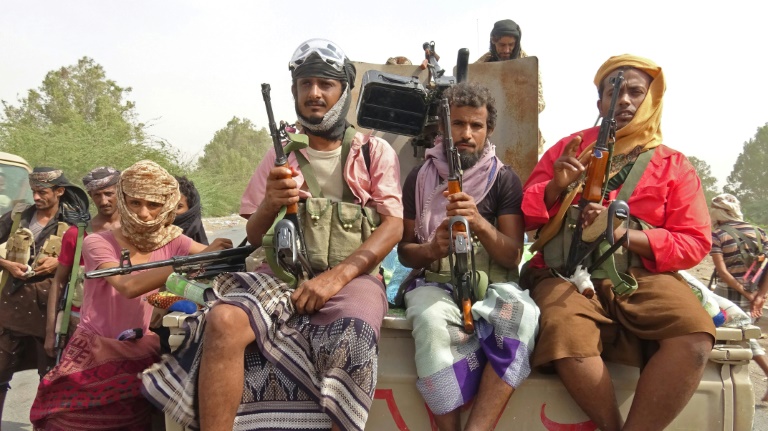 Yemeni government forces pressed further into the strategic port city of Hodeida, seizing its main hospital in heavy fighting Saturday, as their Saudi-led coalition backers put a brave face on an end to US refuelling support.

A loyalist official said mortar rounds were "falling like rain" in the streets as troops weathered rebel-laid mines and snipers to take control of the main hospital in the city of some 600,000 people.

The rebels have put up fierce resistance to the government advance towards the city's vital docks, which are the point of entry for 80 percent of Yemen's commercial imports and nearly all UN-supervised humanitarian aid.

The suspension of US assistance to refuel coalition aircraft comes as Washington's backing of the war effort faces increased scrutiny following international outrage over journalist Jamal Khashoggi's murder last month in the Saudi consulate in Istanbul.

The grinding Saudi-led war in Yemen has caused growing international unease after high-profile coalition air strikes that have killed scores of civilians, many of them children.

The intensified coalition-backed push into Hodeida, which has claimed the lives of at least 382 combatants this month, comes despite aid agency warnings of a humanitarian catastrophe in the event of a protracted battle for the city.

Some 14 million Yemenis are at risk of famine and many more are dependent on international aid, according to UN agency figures, making it vital that Hodeida's port remains open and undamaged.

Yemeni officials said Saturday that pro-government forces had captured the city's May 22 Hospital.

Amnesty International had earlier accused the Huthis of "deliberate militarisation" of the facility after they posted snipers on its roof.

Two days after loyalist troops entered residential neighbourhoods of Hodeida for the first time, fierce battles raged in the city's east as pro-government forces backed by air strikes and helicopters sought to push deeper into the city.

"The battles here are turning into street fighting," one loyalist official said, adding that pro-government forces had advanced around a kilometre along a major highway into the city on Saturday.

Hodeida resident Lubna, who asked that her full name not be used for fear of repercussions, said "the noise of Apache helicopters, artillery and gunfire" was incessant.

Huthi forces were using artillery to pound advancing loyalist forces, at times firing from residential areas, she said, fearing this "could mean that civilians pay the highest price".

UN High Commissioner for Human Rights Michelle Bachelet on Saturday expressed outrage at the "unconscionable toll" from the fighting on an already "deeply frightened and starving" population.

Bachelet urged the coalition, the Huthis "and all those supplying arms to the parties to the conflict to take immediate steps to end the suffering of civilians in Yemen".

"In the last 30 minutes there were more than 15 air strikes... This is the worst time for Hodeida children," she said.

In an apparent face-saving move, Saudi Arabia sought to project the decision to end in-flight refuelling as its own, not Washington's.

The Pentagon had been providing refuelling capabilities for about 20 percent of coalition planes flying sorties over Yemen.

Saudi-controlled media suggested the coalition had the capacity to make up the shortfall.

Saudi-owned Al-Arabiya Al-Hadath television reported that the kingdom has 23 planes of its own for refuelling operations devoted to Yemen operations, while the UAE has six.

But analysts said the US move would limit the coalition's ability to conduct bombing missions.

Andreas Krieg, a professor at the School of Security Studies at King's College in London, said the decision was "significant" as refuelling had been Washington's most important operational role in the war.

But loyalist commander Colonel Sadiq Duwaid said the decision would "not affect" the coalition assault on Hodeida, which would continue "until the Huthi militias surrender".

- 'Nothing but empty talk'-

The intensified battle for Hodeida comes despite Pentagon chief James Mattis calling last month for a ceasefire and negotiations between Yemen's warring parties within 30 days.

The United Nations has since pushed that deadline back to the end of the year.

In an op-ed published by The Washington Post on Friday, the head of the rebels' Supreme Revolutionary Committee, Mohammed Ali al-Huthi, said the escalating offensive in Hodeida showed Mattis's ceasefire call was "nothing but empty talk".

"The recent statements are trying to mislead the world... The United States has the clout to bring an end to the conflict —- but it has decided to protect a corrupt ally," Huthi wrote.

The article infuriated Yemeni government officials, who accused the Post of providing a platform to a "war criminal".

The Huthis have controlled Hodeida since 2014 when they overran the capital Sanaa and swept though much of the rest of the country, triggering the Saudi-led intervention the following year.

The rebels have since been driven out of virtually all of the south and much of the Red Sea coast.

At least 110 airstrikes were carried out in Hodeida, Saada, the Huthi stronghold in northern Yemen, and Sanaa between 31 October and 6 November, the UN Human Rights Office said Saturday.

It reported a total of 17,640 civilian casualties in Yemen since March 2015, with the majority of casualties, 10,852, resulting from coalition air strikes.