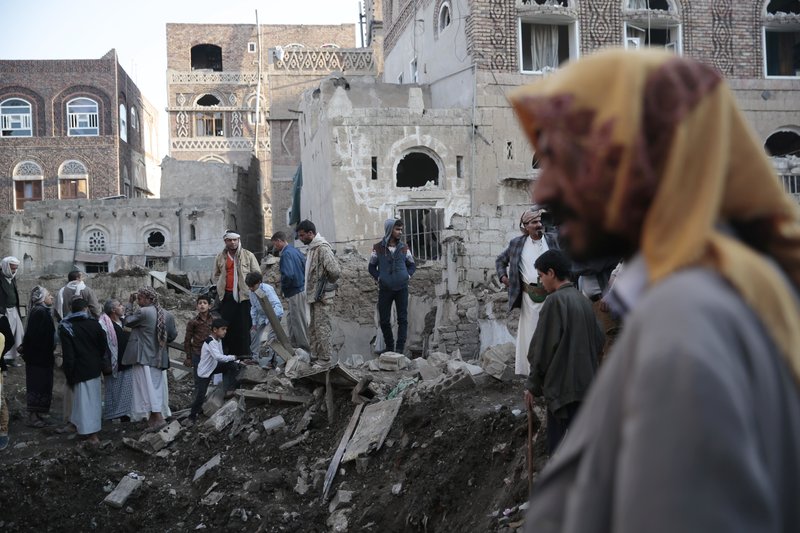 People stand on the rubble of houses at the site of a Saudi-led airstrike near Yemen’s Defense Ministry complex in Sanaa, Yemen, Saturday, Nov. 11, 2017. (AP Photo/Hani Mohammed)

Saudi Arabia announced Monday that the Saudi-led coalition fighting Shiite rebels in Yemen will begin reopening airports and seaports in the Arab world’s poorest country, days after closing them over a rebel ballistic missile attack on Riyadh.

The announcement from the Saudi mission at the United Nations came after the coalition fighting Yemen’s rebels, known as Houthis, faced widespread international criticism over the closure, with the U.N. and over 20 aid groups saying it could bring millions of people closer to “starvation and death.”

“The first step in this process will be taken within 24 hours and involves reopening all the ports in areas controlled by” Yemen’s internationally recognized government, which the coalition backs, read the mission’s statement.

Those ports are in Yemeni cities of Aden, Mocha and Mukalla. For ports in rebel-held or disputed territories, such as the city of Hodeida, the mission said it has asked the U.N. to send a team of experts to discuss ways to make sure weapons can’t be smuggled in.

The Saudi-led coalition hopes that will prevent “the smuggling of weapons, ammunitions, missile parts and cash that are regularly being supplied by Iran and Iranian accomplices to the Houthi rebels,” the statement said.

Despite the Saudi announcement, a top leader of Yemen’s Shiite rebels on Monday vowed retaliation against the oil-rich kingdom over its disastrous blockade of his war-torn country. The war has killed over 10,000 civilians, displaced 3 million people and left much of the infrastructure in ruins.

The fiery comments by Saleh al-Sammad, the head of the Presidency Council of the Houthis, came during a rally of thousands of rebel supporters marching down a main boulevard in the capital, Sanaa.

Al-Sammad said that with the blockade, the coalition “shut down all doors for peace and dialogue.” The more the blockade tightens, he said, the more the Houthis will develop their abilities to “respond to the assault of the enemy.”

After two years of a devastating war, the Houthis still control much of Yemen’s north while the south falls under the embattled President of Abed Rabbo Mansour Hadi, whose government is recognized by the international community and who is supported by the Saudi-led coalition.

Saudi Arabia announced it shut down all ports after a Houthi ballistic missile attack near Riyadh’s international airport.

The missile was intercepted but Saudi Arabia and the United States both accused Iran of supplying the missile, saying it bore “Iranian markings.” The Houthis have denied that.

For its part, Iran long has denied supplying any arms to Yemen, though it has backed the Houthis and highlighted the high civilian casualties from the Saudi-led coalition’s campaign of airstrikes.