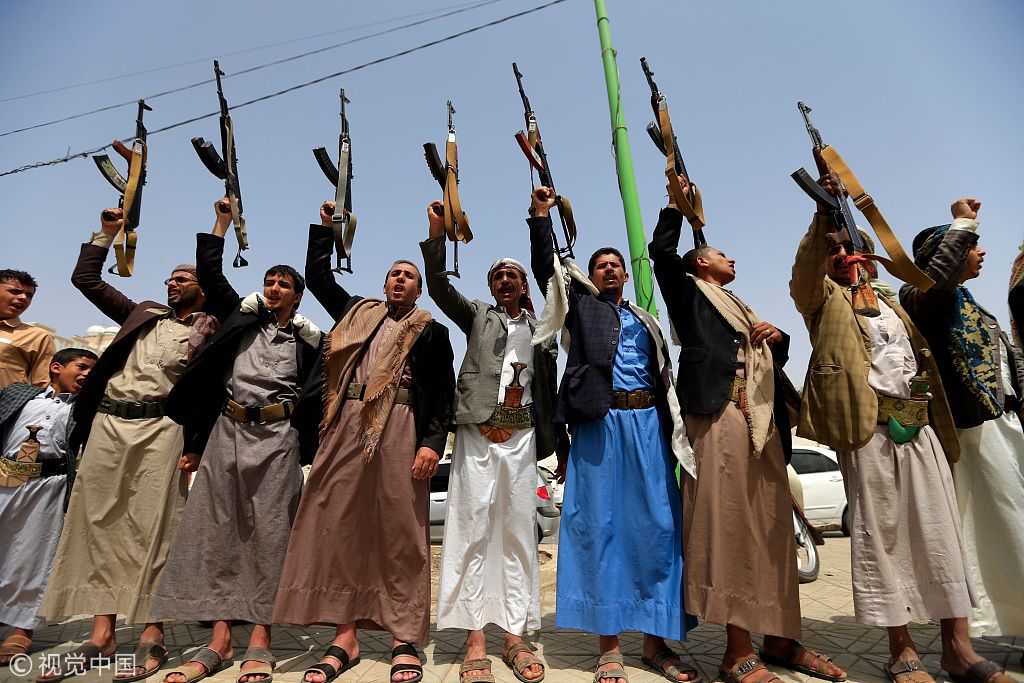 Supporters of the Shiite Yemeni Huthis demonstrate in the capital Sanaa on 25 June 2018, to show their solidarity with fellow Huthis engaged in battles against the coalition forces led by the UAE and Saudi Arabia in Red Sea port city of Hudeida. (Photo: VCG)

"The sons of Ali Abdullah Saleh, Salaah and Madyan, were released upon an amnesty from the (so-called) President of the Supreme Political Council Mahdi al-Mashat (top Houthi official)," read the statement.

The release came nearly ten months after Houthi fighters arrested them along with dozens of the former president's relatives following deadly clashes in the capital Sanaa that killed Saleh at the hands of Houthis.

On Dec. 4, 2017, the Houthis said they killed Saleh, their once partner, after he sought peace with Saudi Arabia, the rich-oil Sunni Gulf country that led an Arab military coalition against Iranian-allied Shiite Houthi rebels.

A senior Houthi source told Xinhua on condition of anonymity that the release came following a "mediation from Oman" and that the sons of Saleh would be transported by an "Omani plane to United Arab Emirates (UAE), where they would join their exiled older brother Ahmed Ali Abdullah Saleh in Abu Dhabi."

Saleh's family became allied with the government of Saudi-backed exiled President Abd-Rabbu Mansour Hadi after Saleh broke out from alliance with Houthis in late 2017. There were no comments yet from the government on the Houthi statement.

Last week, the Saudi-backed internationally recognized government said in a statement that the "Houthis prevented a United Nations plane from landing in Sanaa on Sept. 28 to transport sons of Saleh, according to an agreement to release them signed by the Houthis."

Saleh's family members, most of whom were military commanders and ran the country's elite Republican Guards and Counter-terrorism Special Forces during Saleh's 33 years of rule, are backed by the United States, Saudi Arabia and the UAE.

In Sept. 2014, the Houthis advanced from their stronghold Saada province in the north, storming the capital Sanaa and controlled it and other northern cities by force, including the Red Sea port city of Hodeidah.

The move triggered Saudi Arabia to lead an Arab military coalition and launched an air force campaign on Yemen in March 2015 to reinstate the government of exiled President Abd-Rabbu Mansour Hadi.

The war has killed more than 10,000 Yemenis, mostly civilians, and displaced 3 million others, according to UN aid agencies.