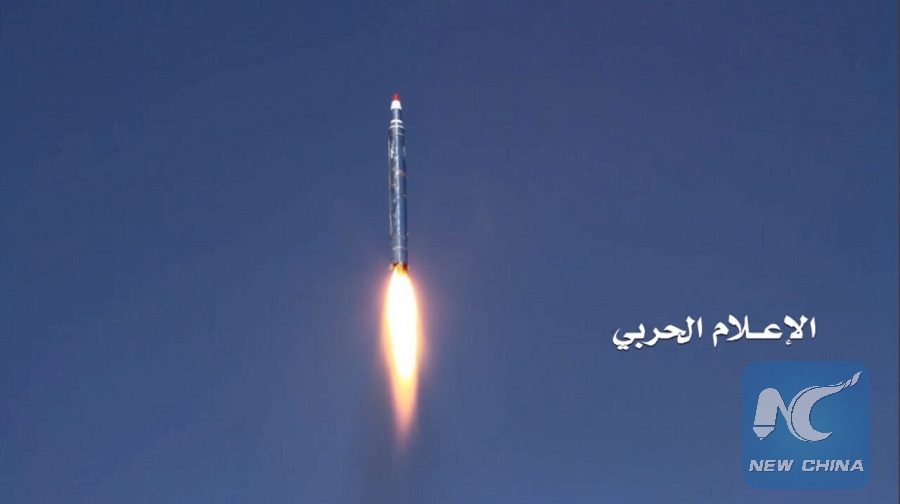 A ballistic missile is seen after it was fired toward the Saudi capital of Riyadh from an undisclosed location in Yemen. Photo: Reuters

It's the second ballistic missile attack claimed by Houthi rebels on the Saudi airport in less than three months.

In November last year, the Saudi air defenses shot down a ballistic missile fired by Houthis at the airport.

The missile attack triggered an all-out blockade by the Saudi-led military coalition on all Yemeni air, sea and land ports, with all Yemen's aid, fuel and food imports cut off.

In early December, the coalition eased the siege, allowing only some aid in through the northern Houthi-controlled ports, but UN aid agencies said it was not enough and asked the coalition to allow more food imports.

On Dec. 19, the Houthis said it fired a ballistic missile toward the Saudi royal palace in Riyadh. Saudi state media said the missile was intercepted without causing casualties.

In March 2015, Saudi Arabia led a military coalition of Arab forces, backed by the United States, to intervene in Yemen's conflict to back the government of exiled President Abd-Rabbu Mansour Hadi.

The coalition has launched thousands of airstrikes on the Houthis, in attempts to roll back rebel gains and reinstate Hadi in the capital Sanaa.

Houthis have launched hundreds of ballistic missiles toward Saudi cities, with most of them intercepted by Saudi air defense forces.

The war has so far killed more than 10,000 Yemenis, mostly civilians, and pushed the Arab country to the brink of mass famine.