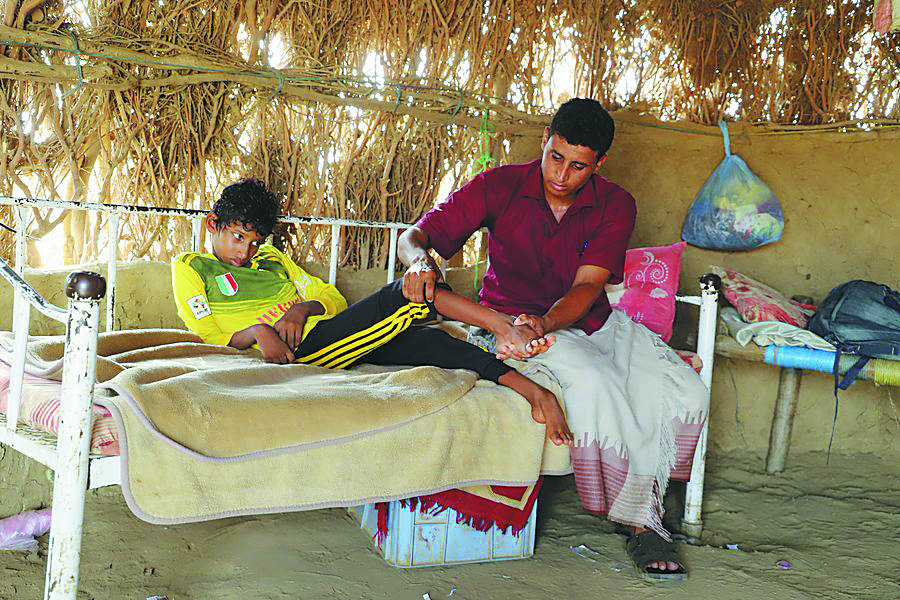 A paralyzed Yemeni boy receives help from his brother in Midi District, Hajjah Province, on Sunday. His injury was caused by shrapnel from a projectile. (Photo: Xinhua)

For more than six years, Hasan al-Jaeyedi has been largely confined to his bed since shrapnel from a projectile during a military attack had hurt his head and spine and paralyzed him.

The tragedy happened in January 2016, just a little more than a year after a civil war broke out in Yemen, when fierce battles between Yemeni government forces and the Houthi rebels spread to the Midi District in the northwestern Hajjah Province.

"I was playing alone when that projectile fell and exploded near my house, pushing me up in the air," said the 12-year-old Yemeni boy, sitting on his rickety bed made of wood and ropes in front of his family's house located in the outskirts of Midi. "I saw my blood running from my body."

As soon as the explosion was heard and smoke rose, Hasan's mother, older brother and neighbors ran from the farm to find him bloodied. They rushed him to a hospital near the border with Saudi Arabia, dozens of kilometers north of his house.

"Since then, I cannot stand, walk or play… But I want to walk and run again like other children," he said.

Islam al-Sabri, a local doctor, said Hasan is in urgent need of financial assistance to move him to a specialized hospital out of the province to complete his treatment.

However, his older brother Ahmed said the family has no money to take Hasan to such hospitals in other cities.

Their father died just weeks before the onset of the civil war in late 2014, leaving the eight-member family helpless in the tragic war.

Following the attack, Hasan's family, along with many other residents, fled Midi to a camp for internally displaced Yemenis near the border with Saudi Arabia, where they stayed for nearly three years.

They then returned home after the Yemeni army, backed by the Saudi-led Arab coalition forces, recaptured the district from the Houthi rebels in April 2018.

Hasan is just one of the many Yemeni children maimed or killed during the exchange of fire or by explosive remnants across the war-torn country.

The United Nations Children's Fund has warned of a growing number of child victims from missiles, land mines, cluster bombs, and remnants of war in Yemen.

"Since the conflict escalated in Yemen nearly seven years ago, the UN has verified that more than 10,200 children have been killed or injured. The actual number is likely much higher," stated UNICEF on its website in March.

The civil war in Yemen erupted after the Iran-backed Houthi militia swept and took control of several northern provinces, forcing the Saudi Arabia-backed Yemeni government out of the capital Sanaa.

The UN is making an effort to end the war in Yemen by mediating a political settlement between the warring parties. This year, it brokered a two-month cease-fire in Yemen for the first time on April 2, and then managed to extend the truce twice to Oct 2.

On Sunday, Yemen's internationally recognized government announced that four of its soldiers were killed by the Houthi militia despite the ongoing truce.