HAJJAH, Yemen, Aug. 6 (Xinhua) -- At a once-popular market in Yemen's northern province of Hajjah, few now visit the stalls piled high with local commodities, as their soaring prices have discouraged most of the customers from buying. 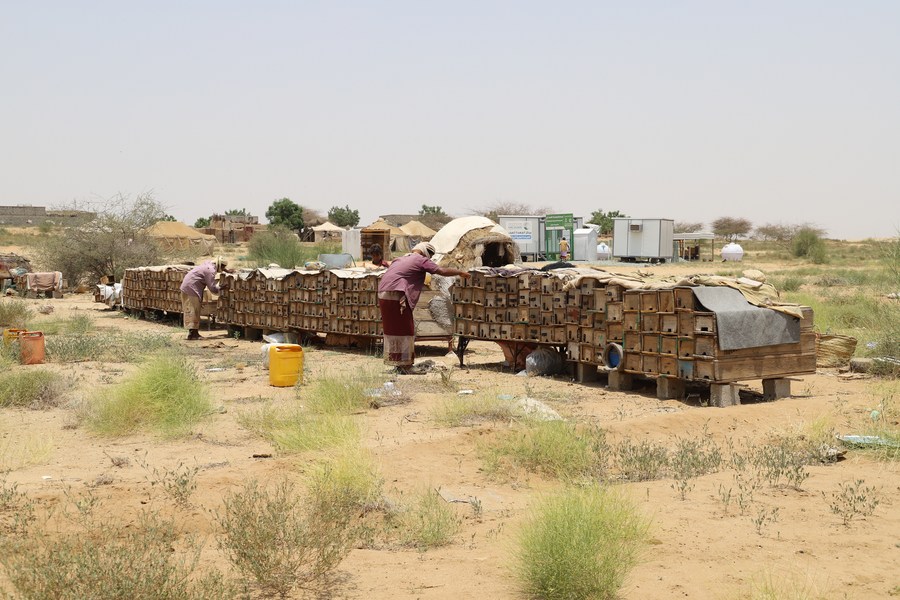 "Since early morning, only four customers have come. The situation is worsening by the day because of the civil war and the economic deterioration," Ibrahim Dahbol, a seller of meat in the market in Hayran district, told Xinhua.

"The prices are rising every day and what I earn is not enough to buy basic commodities for my children," the father of five said.

Children, who should have been at school, work in the market too. They sit on the dirt from sunrise to sunset, some selling ropes and straw hats, and some selling vegetables and canned food.

"I have been working here for three years since I left school because of the war and displacement of my family. My family's financial situation has worsened after my father's death," said Hisham Hakami, one of the children working in the market.

"What I earn a day is barely enough to buy one meal for my mother and my sisters as food prices are skyrocketing," the 13-year-old boy told Xinhua.

Yusef Ahmed, a 12-year-old who was repairing shoes for a customer in a corner of the market, also told Xinhua that his family suffer from hunger.

Yemen has been mired in a civil war since late 2014 when the Iran-backed Houthi militia seized control of much of the country's north and forced the internationally recognized government of President Abd-Rabbu Mansour Hadi out of the capital Sanaa.

Since then, the Yemeni economy has collapsed, sending commodity prices to soar and pushing millions of families to the brink of starvation.

The war has killed tens of thousands of people, mostly civilians, displaced 4 million and destroyed the country's educational and health sectors.

Majid Al-Daeri, a Yemeni economic analyst based in the southern port city of Aden, the interim seat of the Saudi-backed government, attributed the rising prices to the devastating civil war and financial collapse.

"One of the most important reasons that led to the economic crisis and the rapid devaluation of the local currency in Yemen is the lack of hard currency in the central bank in Aden after the halt in the export of oil and liquefied gas during the war," Al-Daeri told Xinhua.

Yemen imports about 90 percent of its food, according to the UN aid agencies. The war, destroyed infrastructure, decline of the private sector and the non-payment of salaries in the public sector in the country's north have contributed to the rise in food prices.

Ahmed Qasem of the Council of Arab Economic Unity in Cairo believes that reaching a peace solution between the Yemeni parties could end the suffering of the Yemeni people.

"Yemen's dependence on imports, the increase in the demand for foreign currencies and the halt of exporting oil and gas all led to the currency inflation and the decrease of riyal's value," Qassem told Xinhua.

For his part, Mustafa Nasr, head of the Center for Studies and Economic Media in Yemen, said the economic crisis is a natural result of the war.

"The Yemeni riyal has lost more than two-thirds of its value. The government has lost its basic resources, and millions of Yemenis have lost their sources of income," Nasr told Xinhua.