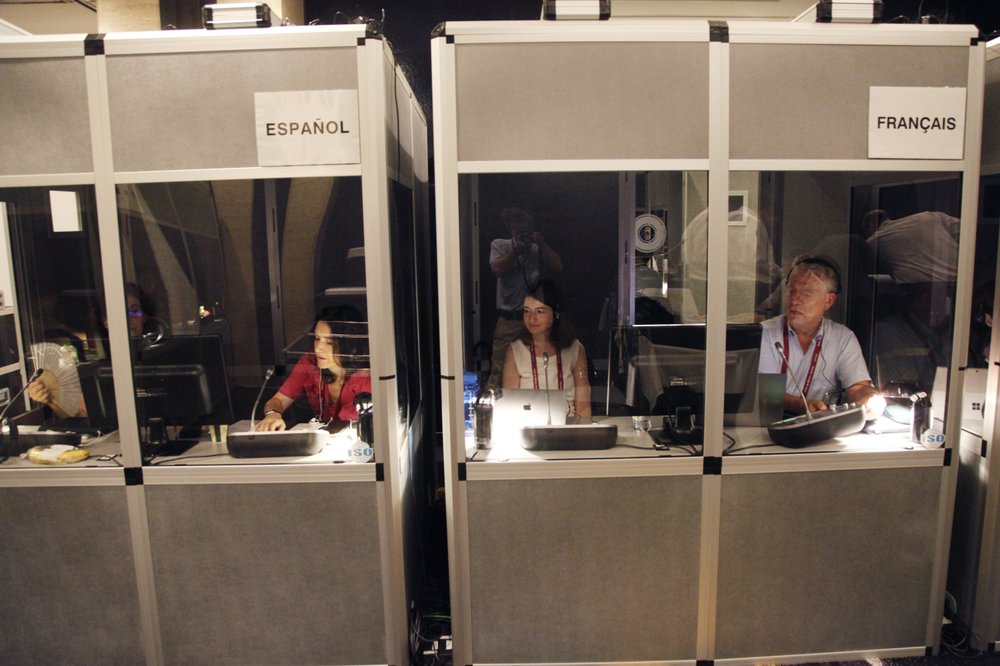 In this Tuesday, Aug. 20, 2019, photo, interpreters work in their booths during a Chef de Mission Seminar hosted by The Tokyo Organizing Committee of the Olympic and Paralympic Games, in Tokyo. Next year’s Tokyo Olympics will be a fiesta for a team of about 100 interpreters. They will handle interpretation for more than 10,000 athletes representing more than 200 national Olympic committees. (Photo: AP)

Alexandre Ponomarev is the chief interpreter for next year's Tokyo's Olympics. He speaks more than a half dozen languages: Russian, English, Spanish, French, German, Danish and Ukrainian. And he can get by in a handful of others.

But at times, even he needs an interpreter — for instance, when he's working in Japan.

"I can't speak all languages, unfortunately," he said, answering in English in an interview with The Associated Press. "I wish I could."

Next year's Olympics will be an interpreter's delight: more than 10,000 athletes representing about 200 nations or territories, many of which also have minority languages that are spoken alongside the national language.

Stepping into the din are 100 interpreters — 40 from Japan and 60 from outside — handling 11 official languages for Tokyo: Japanese, English, French, Spanish, German, Russian, Italian, Arabic, Chinese, Korean, and Portuguese.

It's a team accustomed to interpreting for presidents, prime ministers, and monarchs.

But the Olympics are different and require fluency in the nuances of judo, the ins-and-outs of archery or the vagaries of modern pentathlon. Then mix in the lingo from new Olympic sports like surfing, skateboarding and sport climbing.

"They train. They prepare," Ponomarev said. "We have glossaries, we have Olympic terminology and we study different sports."

Even this is not always enough. Ponomarev said he was bamboozled when a snowboarder at the Pyeongchang Winter Olympics responded in English about a performance.

It was a great run.

"The surfers, they have their own speak," Ponomarev said. "The same goes for snowboarders at the Winter Olympics. That can be challenging. But we certainly found an equivalent."

In Japanese, Arabic, German. Or whatever.

Ponomarev's team includes at least one former Olympian, and most have done several Olympics. He also corrects anyone who confuses interpretation with translation. He reminds that translation refers to the written word.

Much of the interpretation service is for athletes after they've won medals. But interpreters also work briefings for the International Olympic Committee, the World Anti-Doping Agency WADA, and the Court of Arbitration for Sport. Here the focus can be disputes, doping, and other rule-breaking. One poor interpretation can cause confusion, even legal fallout.

"They are used to working under pressure," Ponomarev said. "They know that every word they do wrong is going to have repercussions. If you cannot understand what is being said, you do not invent. That is rule No. 1."

Ponomarev sees the power of artificial intelligence on the horizon, closing in on the professional interpreter's space.

"AI is not nearly as evolved as one might think to replace humans," he said. "I'm not trying to say that I'm not worried about it at all, because I certainly am to be absolutely honest. Maybe 10 years down the road something will change. Maybe not."

He said machines still can't always catch humor, a play on words, or intonation. And they can't see "a wink."

"It's a similar question. Would you trust your legal affairs to a machine? Would you trust only a machine to fix your teeth or perform surgery on you? It's a common misconception that we interpret words. We don't. We first understand the meaning behind them, and then we convey the message."

Ponomarev said cultural differences can affect language. And vice versa. He said he might assign a speaker of Brazilian Portuguese to a Brazilian, and a peninsular Portuguese speaker to someone from Portugal; likewise with Spanish, which is spoken differently across 20 countries.

"Behind every language is a mentality," he said. "I believe in acquiring a language you also acquire a certain mentality."

Tokyo's Olympics will deploy an improved system of interpretation over Rio de Janeiro and previous games. Interpreters will work out of the main press center, taking audio and video feeds from the scattered venues. This cuts out chauffeuring interpreters around the city. Ponomarev said a recent test of the system was nearly perfect, and could do five media events at once.

This means nearly every media conference will have simultaneous interpretation, in which the speaker's words are relayed over an earpiece as they are spoken, rather than consecutive interpretation, which is slower and gives an interpretation only after the speaker finishes several sentences.

Ponomarev said he worked his first Olympics in 2008 in Beijing, and took over as the chief in Rio. He credits his mother with getting him started, smuggling DVDs of American films into the old Soviet Union. He singled out Star Wars and Indiana Jones.

He eventually trained in Moscow and the Middlebury Institute of International Studies in Monterey, California. Under the Soviet system, he was assigned to study Danish, which is not widely spoken but helped with German and gave him a conversational understanding of Norwegian and Swedish.

"Once you acquire one language, it just stacks up," he said.