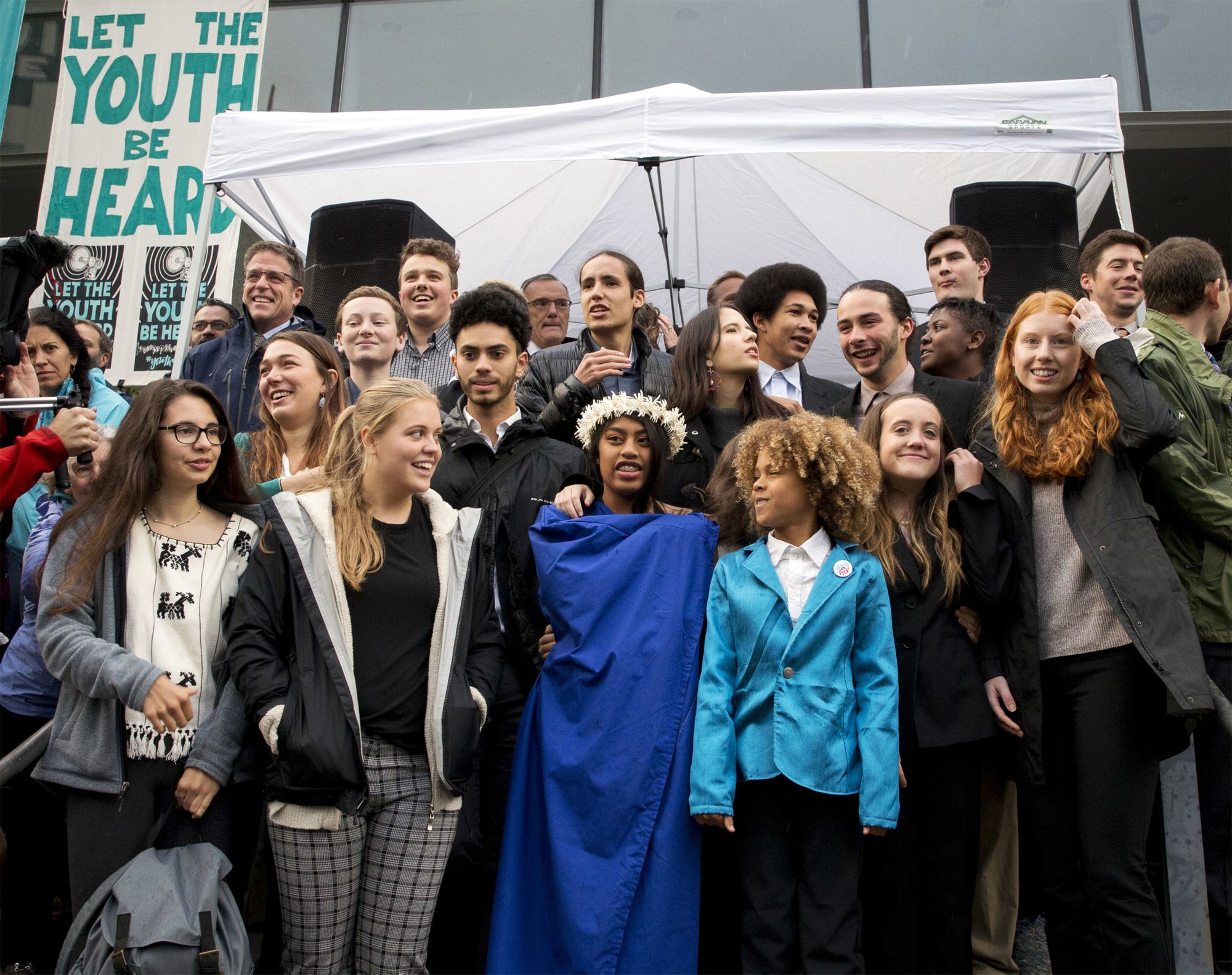 FILE - In this Oct. 29, 2018, file photo, young plaintiffs stand on the steps of the United States District Courthouse during a rally in Eugene, Ore., to support a high-profile climate change lawsuit against the federal government. (Photo: AP)

A lawsuit by a group of young people who say US energy policies are causing climate change and hurting their future faces a major hurdle Tuesday as lawyers for the Trump administration argue to stop the case from moving forward.

Three judges from the 9th US Circuit Court of Appeals are hearing arguments from lawyers for 21 young people and the federal government in Portland but are not expected to rule right away. The Obama and Trump administrations have tried to get the lawsuit dismissed since it was filed in Oregon in 2015.

The young people argue that government officials have known for more than 50 years that carbon pollution from fossil fuels was causing climate change and that policies promoting oil and gas deprive them of life, liberty and property.

“It is the constitutional duty of the government to protect public trust resources on which we all depend and to protect us from any damages that it may inflict upon its citizens,” said Aji Piper, one of the plaintiffs.

The 18-year-old said smoke from forest fires, diminished snowpack and acidification of the ocean — which he says have all increased because of climate change — have affected his community in Seattle.

“We are asking the courts to recognize our rights and see that the Constitution demands that our rights be protected,” Piper told the House Select Committee on the Climate Crisis in its inaugural meeting in April.

Lawyers for President Donald Trump’s administration have argued that the lawsuit is trying to direct federal environmental and energy policies through the courts instead of through the political process.

“No federal court has ever permitted an action that seeks to review decades of agency action (and alleged inaction) by a dozen federal agencies and executive offices — all in pursuit of a policy goal,” the attorneys argued in a March court brief.

Justice Department lawyers also assert that the young people had not identified any “historical basis for a fundamental right to a stable climate system or any other constitutional right related to the environment.”

The lawsuit says the young are more vulnerable to serious effects from climate change in the future. The American Academy of Pediatrics, 14 other health organizations and nearly 80 scientists and physicians agreed in a brief filed with the appeals court.

“Today’s children are expected to have poorer health as they age than today’s adults do, because of the worsening and intensifying effects of climate change,” three of the experts wrote in the New England Journal of Medicine.

They pointed out that the World Health Organization estimates that 88% of the global health burden of climate change falls on children younger than 5.

The lawsuit wants the US District Court in Eugene, where the lawsuit was filed, to declare that the US government is violating the plaintiffs’ constitutional rights to life, liberty and property by substantially causing or contributing to a dangerous concentration of carbon dioxide in the atmosphere.

It asks the court to declare federal energy policy that contributes to global warming unconstitutional, order the government to quickly phase out carbon dioxide emissions to a certain level by 2100 and mandate a national climate recovery plan.

The case has become a focal point for many youth activists, and the courtroom in Portland was expected to be packed Tuesday. A video livestream was being set up at a nearby park, where a rally was expected to be held, said Meg Ward, spokeswoman for Our Children’s Trust, a group supporting the lawsuit.

If the panel decides the lawsuit can move forward, it would go before the federal court in Eugene.