WORLD Young whale stranded in London's Thames is put down

Young whale stranded in London's Thames is put down

A juvenile minke whale that became stranded in London's River Thames has been put down after its condition deteriorated and vets decided it could not survive in the open water. 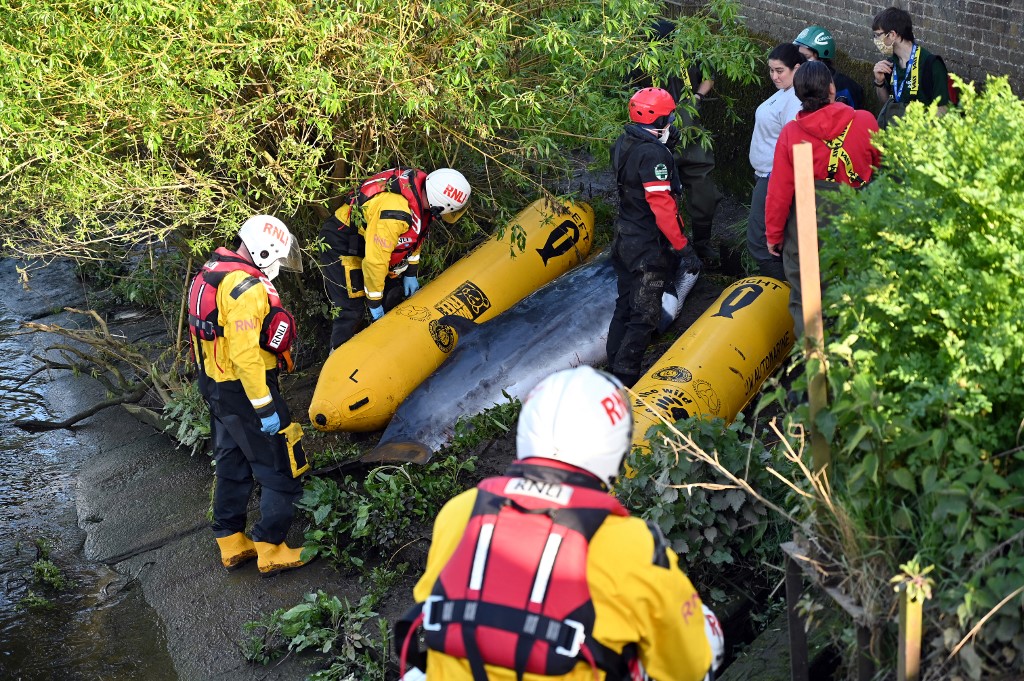 A juvenile Minke whale, having been euthanised by vets from London Zoo, is lifted from the water at Teddington in southwest London after it had swum up the River Thames on May 10, 2021. (Photo: AFP)

The whale, measuring three to four metres (10-13 feet), was first spotted in southwest London on Sunday and was washed ashore at a set of gates controlling water flow.

Rescue efforts by the British Divers Marine Life Rescue (BDMLR) service and firefighters failed when the whale slipped its leash and then swam upriver, instead of towards the sea.

"The last 45 minutes we were with the whale its condition was deteriorating, its breathing wasn't right and it wouldn't have survived much longer," BDMLR national coordinator Julia Cable said late Monday.

She said vets from London Zoo injected a "large" anaesthetic dose into the malnourished whale. It is thought the whale got separated from its mother and was unable to fend for itself.

"It's always sad, but we now know that putting it back out into the open sea would have been sending it to starve out there," Cable said.

Minke whales are the smallest of the world's great whales and typically grow to a length of 10 metres in adulthood.

They can usually be found throughout the northern Atlantic and Pacific oceans but have been spotted as far north as the Arctic and as far south as the Equator.

In January 2006, a northern bottlenose whale became stuck in the Thames, sparking huge media interest. It died as it was being ferried back out to sea.