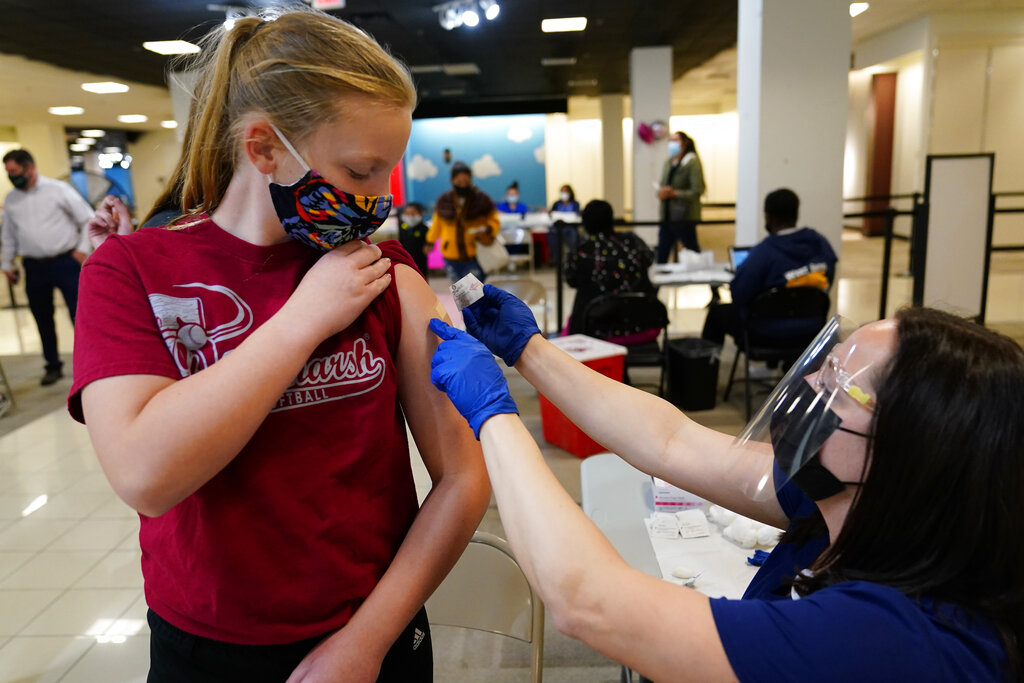 Olivia Edwards, left, 13, of Flourtown, Pa., gets a bandage from registered nurse Philene Moore after getting a Pfizer COVID-19 vaccination at a Montgomery County, Pa. Office of Public Health vaccination clinic at the King of Prussia Mall, Tuesday, May 11, 2021, in King of Prussia. (Photo: AP Photo)

MISSION, Kan. (AP) — Parents, schools and vaccine clinics rushed to begin inoculating younger adolescents Tuesday after U.S. regulators endorsed Pfizer’s COVID-19 vaccine for children as young as 12, a decision seen as a breakthrough in allowing classroom instruction to resume safely around the country.

A handful of cities started offering shots to children ages 12 to 15 less than a day after the Food and Drug Administration gave the vaccine emergency use authorization for that age group. Most communities were waiting for a federal advisory committee that meets Wednesday to sign off on the move, while anxious families called clinics and pharmacies to ask about the soonest appointments.

In Atlanta, 12-year-old Jane Ellen Norman got her first dose of the Pfizer vaccine at Mercedes-Benz Stadium on Tuesday morning. The girl said she looked forward to having “a little bit more freedom.”

Her mother, English Norman, said she also booked an appointment for her 14-year-old son immediately after learning that the FDA on Monday had declared the vaccine safe for the nearly 17 million 12- to 15-year-olds in the U.S. Now, the entire family – including Norman's husband, a physician, and their 17-year-old son – has begun the vaccination process.

Most COVID-19 vaccines worldwide have been authorized for adults. Pfizer’s vaccine is being used in multiple countries for teens as young as 16, and Canada recently became the first to expand use to children 12 and up. Parents, school administrators and public health officials elsewhere have eagerly awaited approval for the shot to be made available to more young people.

The official sign-off on the vaccine's use in the 12-15 age group will not occur until at least Wednesday, when the Centers for Disease Control and Prevention committee meets. Local governments that began offering shots right away viewed the FDA decision on Monday as enough of a green light to start the process.

“Under all relevant legal authority, once the FDA gives approval, a prescriber is permitted to prescribe the vaccine,” Kelly Cofrancisco, a spokesperson for Pennsylvania's Montgomery County, said as shots for residents 12 and up started Tuesday.

In the Kansas City area, Children’s Mercy Hospital has run vaccine clinics for 16- to 21-year-olds since last month and plans to expand them to cover the younger ages soon. Dr. Ryan McDonough, a pediatrician who oversees the COVID-19 vaccine clinics, said he has been deluged with calls from patients and texts from friends and relatives wanting to sign up their kids.

The Iowa-based grocery store chain Hy-Vee, which has 278 stores in eight Midwestern states, was looking to begin offering the vaccine to younger adolescents as soon as Thursday. Interest has been strong among parents, who deluged stores with calls and emails after the FDA signed off on the vaccine, Hy-Vee spokesperson Christina Gayman said.

“Some people tried to go ahead and go online and make an appointment,” she said. “But we at this time have let those individuals know, ’Hey, we cannot vaccinate that age group just yet.’”

Chicago, meanwhile, said it was ready to begin vaccinating people between 12 and 15 but would wait until Thursday to start administering shots. The city's public health commissioner, Dr. Allison Arwady, noted that the communities with the lowest vaccination rates continue to have the highest numbers of confirmed COVID-19 cases and rates of hospitalization and death — even in teens and young adults.

“Help us increase vaccine uptake and get past COVID by bringing your whole family to get vaccinated together,” Arwady urged in a news release.

Fifteen-year-old Elizabeth Goluszka was ready. For more than a year, she and her friends have celebrated birthdays and holidays at a distance. The teenagers left gifts outside each other's homes as a replacement for the parties they planned and then canceled as the pandemic wore on. Elizabeth said she also missed dance competitions and chatting with friends over lunch at Batavia High School in Chicago’s western suburbs.

“I’m just so looking forward to getting back to a sort of normal high school experience, like having the homecoming dance and being able to have lunch with friends,” she said.

Dr. Monica Verduzco-Gutierrez said her son, Nicolas, had hoped to be part of the clinical trials for the Pfizer but they were no longer signing up participants by the boy's 12th birthday. The family relocated this summer to San Antonio when Verduzco-Gutierrez accepted a new job and it’s been difficult for Nicolas to make friends or explore much.

Attending classes in person helped, but there’s not much time to socialize at school. Masks and social distancing don’t make it any easier either, he said, and he's looking forward to getting vaccinated.

"It will be really nice to be able to say, ‘Hey, want to go get ice cream or something?’” Nicolas said.

The regulators' decision was good news to education officials in Massachusetts, where all high schools must resume in-person classes five days a week by Monday. Two-thirds already are doing so.

“I think it is a great opportunity, obviously, to create even more safety in our schools for our students and our staff and getting closer to herd immunity,” said Russell Johnston, senior associate commissioner at the state’s Department of Elementary and Secondary Education. “I think it is really important.”

But not everyone is eager. Polling by the Kaiser Family Foundation found that just 3 in 10 parents of children ages 12 to 15 say they would get their child vaccinated as soon as possible. One-quarter said they would wait a while to see how the vaccine is working.

Indianapolis parent Inna Ekhaus said it was a “no-brainer” for her and her husband to get vaccinated to curb the spread of COVID-19 and to protect themselves. But after doing a risk-benefit analysis, she does not plan to take the couple's two sons, ages 13 and 10, to get inoculated.

Ekhaus said her boys, who are otherwise healthy, got COVID-19 in October and reported only minor symptoms.

“For the kids, I don’t think the due diligence has been done to show the long-term effects, and children’s bodies are still developing,” said the 38-year-old tech worker.