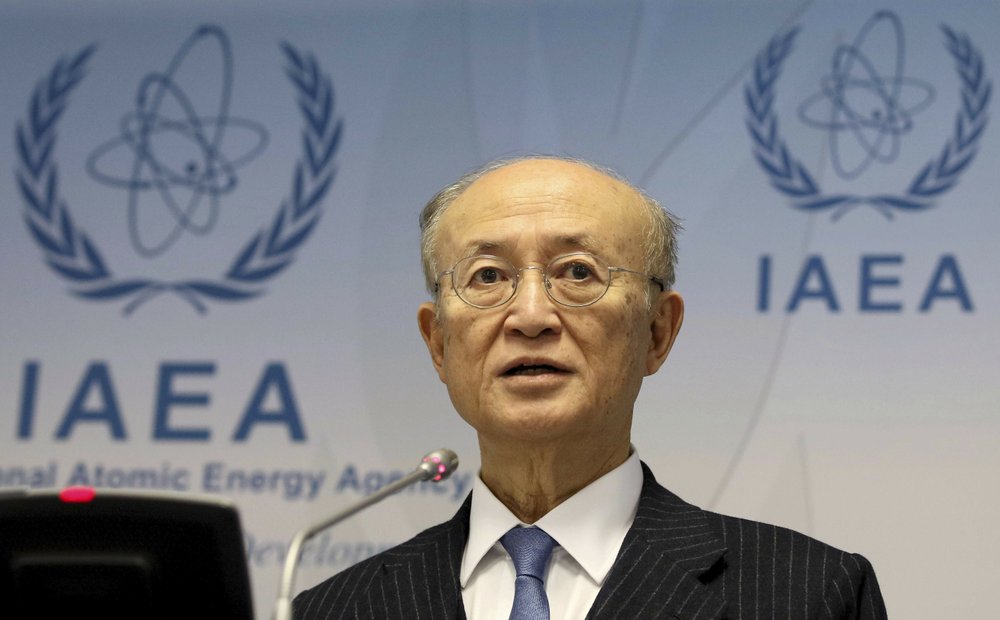 International Atomic Energy Agency (IAEA) Director General Yukiya Amano of Japan addresses the media during a news conference after a meeting of the IAEA board of governors at the International Center in Vienna, Austria, November 22, 2018. The IAEA said Monday, July 22, 2019, it is announcing with regret the death of Amano. The Secretariat did not say how Amano, who was 72, died. (Photo: AP)

Yukiya Amano, the Japanese diplomat who led the International Atomic Energy Agency for a decade and was extensively involved in negotiations over Iran’s nuclear program and the cleanup of the 2011 Fukushima nuclear disaster, has died at 72, the agency announced Monday.

Amano, who had wide experience in disarmament, non-proliferation diplomacy and nuclear energy issues, had been chief of the key U.N. agency that regulates nuclear use worldwide since 2009.

The news of his death comes at a time of increasing concerns and escalating tensions over Iran’s nuclear program, after U.S. President Donald Trump left a 2015 deal with world powers that restricted Iran’s nuclear program in return for sanctions relief. Amano was heavily involved in the yearslong negotiations that led to the landmark Iran nuclear deal.

As head of the IAEA, Amano also dealt with the aftermath of Japan’s devastating 2011 Fukushima nuclear power plant accident, where three reactors went into meltdowns after a tsunami.

The IAEA said Amano died Thursday but his family had asked the agency not disclose his death until a family funeral had taken place Monday. It did not give a cause of death for Amano or say where he died.

The IAEA said Mary Alice Hayward, the agency’s deputy director general and head of the department of management, would lead the agency in the interim. The IAEA flag was lowered to half-mast in tribute.

The agency said Amano was planning to write soon to its board of governors announcing his decision to step down. It released part of that letter, in which Amano praised the agency for delivering “concrete results to achieve the objective of ‘Atoms for Peace and Development.’” Amano added that he was “very proud of our achievements and grateful” to IAEA member states and agency staff.

Amano’s death will be a strong blow for the nuclear agency, said Adnan Tabatabai, an expert with the Center for Applied Research in Partnership with the Orient in Bonn, Germany.

“While I am convinced that the IAEA as an institution will be able to continue its work dedicated to nuclear non-proliferation, the loss of a personality like Yukiya Amano, who had embodied this dedication, will add to an already highly delicate and complex situation with regards to the nuclear agreement with Iran,” he told The Associated Press.

Tabatabai suggested that opponents of the Iran nuclear agreement would “try to seize this opportunity to further weaken the position of the IAEA.”

“It is therefore of upmost importance that ... (Amano’s successor) comes out in strong support” of the Iran nuclear deal, he said.

Tributes to Amano poured in Monday from Japan, Iran, the European Union and the United States.

Iran’s Deputy Foreign Minister Seyed Abbas Araghchi expressed his condolences, writing on Twitter that they had worked closely together and commending Amano’s professionalism. He said they had ensured Iran’s compliance with the JCPOA, the nuclear accord that Iran struck with world powers in 2015 that is now unraveling under pressure from the Trump administration.

The U.S. unilaterally withdrew from the accord a year ago and Iran has recently inched past limits of its uranium enrichment set out in the accord. European leaders are scrambling to keep the accord intact.

The European Union’s foreign policy chief, Federica Mogherini, called Amano “a man of extraordinary dedication & professionalism, always at the service of the global community in the most impartial way.”

Maas said the agency’s inspection of the Iran nuclear deal was an example of Amano’s “biggest-possible dedication, professionalism and independence.” Germany is one of the nations that signed the 2015 Iran nuclear deal and is now trying to salvage it.

Jackie Wolcott, the U.S. ambassador to international organizations in Vienna, said Amano “was greatly respected as an effective leader, diplomat, and true gentleman by the entire staff of the U.S. Mission” and other U.S. diplomats.

John Bolton, Trump’s national security adviser, said in a statement that Amano’s “commitment to nuclear nonproliferation and his championing of peaceful nuclear energy have been unparalleled in leading the International Atomic Energy Agency for almost a decade ... He will be sorely missed.”

The Tokyo Electric Power Co., which ran the nuclear plant in Fukushima, northeastern Japan, also praised the diplomat, saying it “received so much support and guidance on the decommissioning efforts” at the power plant from him.

Japan’s Foreign Ministry noted that following the Fukushima nuclear power plant meltdown, Amano led international efforts to improve nuclear safety based on the lessons learned from the accident while providing support for Japan.

Amano was Japan’s representative to the IAEA from 2005 until his election as director general in July 2009, including a stint as chair of its board of governors from 2005-2006.

A graduate of the Tokyo University Faculty of Law, Amano joined the Japanese Foreign Ministry in 1972 and was posted to jobs in Belgium, France, Laos, Switzerland and the United States. At the ministry, Amano was chief of the Disarmament, Non-Proliferation and Science Department from 2002 until 2005.

He also previously served as an expert on the U.N. panel on missiles and on the U.N. expert group on Disarmament and Non-Proliferation Education.

He is survived by his wife, Yukika.