By LI YINGQING in Kunming and WANG XIAOYU | CHINA DAILY 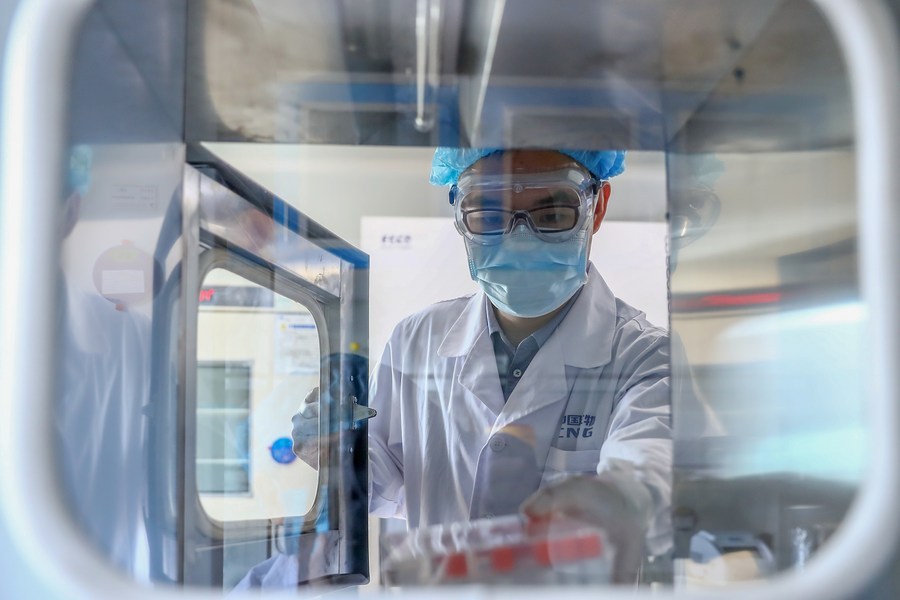 A staff member takes out samples of the COVID-19 inactivated vaccine at a vaccine production plant of Sinopharm in Beijing, on April 11, 2020. (Photo: Xinhua)

A Chinese-built COVID-19 testing laboratory in the coastal city of Sihanoukville, Cambodia, that begun operation in late April, is expected to help resolve local testing problems and bolster the city's economic recovery, according to Chinese aid workers.

The laboratory is able to process over 1,000 samples a day. It was officially handed over to local authorities on April 19 and became operational on April 30 after receiving the necessary certification, according to Zhang Jiapeng, deputy director for Southeast Asian Affairs at the Foreign Affairs Office of the Yunnan provincial government.

Before its establishment, all samples taken in Sihanoukville, the second-largest city in Cambodia with a population of over 302,000, had to be sent to the country's capital Phnom Penh for testing, he said.

"Based on the city's total population and its epidemic situation, the new laboratory's capacity will be sufficient to meet local testing requirements, and will help the city to improve its early detection of new cases and contain the spread of the virus," Zhang said.

As Sihanoukville is home to many China-funded enterprises and a large number of Chinese people currently live in the city, launching the laboratory will improve its personnel exchanges and help accelerate its economic recovery, he added.

Zhang was part of a group of six who were sent by Yunnan province to Sihanoukville on April 14 to build the laboratory. The other members of the team were health workers from the provincial disease control center and a hospital in the provincial capital Kunming.

Initial construction work for the facility, which is located in the Sihanoukville Provincial Hospital, was carried out by the Cambodian government.

On March 25, equipment and testing materials worth more than 2.2 million yuan ($341,400) was shipped from China to Cambodia to equip the laboratory.

Due to a sharp rise in new infections, there were few festivities or celebrations on the streets of the city when the team arrived on April 14, the beginning of a three-day national holiday in Cambodia celebrating the Khmer New Year, Zhang said. On that day, the country reported nearly 180 new cases, according to local authorities.

"But the Sihanoukville people's hope to return to a normal and happy life was clear," Zhang said.

The Chinese team started work soon after its arrival and having tested negative. Within three days, they had completed testing, installing and calibrating devices at the laboratory.

"One major obstacle at the beginning was language. Our foreign counterparts were always eager to lend a helping hand, but sometimes could do nothing because of language differences," Zhang said. "As our work made progress, we got to understand each other more efficiently."

The team was also tasked to train local health workers in managing laboratory work and adhering to biosafety precautionary measures.

"The Cambodian workers were very proactive in learning from us and had a strong sense of teamwork. Every evening after we left the laboratory, they always stayed behind to prepare for tomorrow," Zhang said.

Jia Senquan, a laboratory worker from Yunnan provincial disease control center and a member of the team, said it returned to China on April 30 and was released from quarantine on Monday.

According to the Yunnan provincial government, this recent mission to Cambodia was the second time the province in southwestern China had provided anti-pandemic assistance to foreign countries.

In November, health workers from Yunnan were sent to Vientiane, the capital of Laos, to help set up a new nucleic acid testing center aimed at boosting the city's testing capacity.