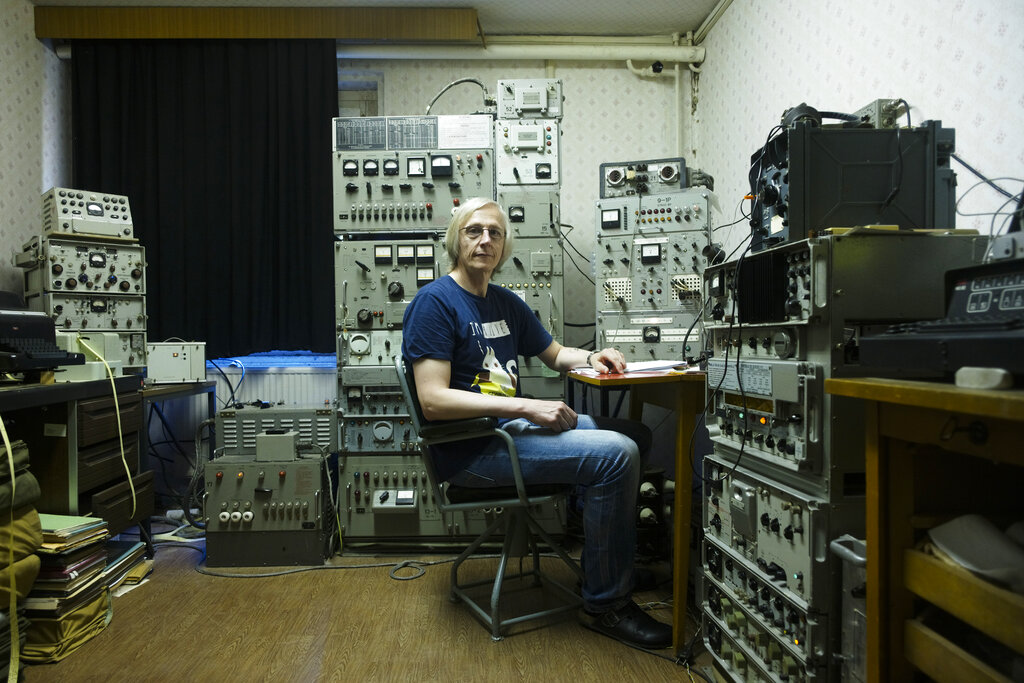 Jens Raeder sits between carefully restored Soviet shortwave transmitter he use for communication with military radio enthusiasts around the world in the village Harnekop at a rural region east of Berlin, Germany, Wednesday, Aug. 12, 2020. (File photo: AP)

From his home on a former East German army base, Jens Raeder can power up a carefully restored Soviet shortwave transmitter and communicate with military radio enthusiasts around the world.

Getting a signal on his smartphone is a different matter, however. To connect to the mobile network, Raeder has to drive 5 kilometers (3 miles) to a nearby village with a cell tower.

“People have learned that I’m simply not reachable on my cell,” the 57-year-old said during an interview in Harnekop, population 100, about a 90-minute drive from Berlin.

Raeder is among hundreds of thousands of Germans who live in a “Funkloch,” or radio hole, as such coverage dead spots are known.

While mobile carriers claim they cover close to the entire country, users often report little or no signal inside buildings or outside large towns.

Two years ago, a member of Chancellor Angela Merkel's government voiced his anger about the poor cellphone reception in the country, calling the existence of such dead spots "one of the greatest disgraces for Germany as a center of technology.”

“I’m on the road a lot of the time," Economy Minister Peter Altmaier said. "I’ve told my office that I don’t want to be connected to foreign officials because I’m incredibly embarrassed when I have to call them back three, four times because I keep losing the connection.”

The coronavirus pandemic has added urgency to this frustration. Cut off from family, friends, schools and their workplace, millions around the world have relied on digital devices to stay connected - widening the gap between the haves and have-nots.

“The corona crisis has shown with a magnifying glass where the problems with our infrastructure are," said Anke Domscheit-Berg, a lawmaker with the opposition Left party. "In the countryside we don’t just have bad cell coverage, there’s a lack of fiber connections too.”

“Working and schooling from home are hardly possible if there’s only a slow Internet connection and all members of the family are fighting for bandwidth,” she told The Associated Press.

With fixed-line broadband equally patchy in parts of Germany, some are placing their hopes in the next generation of mobile technology, known as 5G. It promises to deliver faster connections with less lag, an always-on link to the Internet powerful enough to carry countless high-definition video calls at once and allow self-driving cars to communicate with each other in real time.

Ilja Nothnagel of the German Chambers of Industry and Commerce, which represents millions of companies in the country, said “the new 5G mobile phone standard offers enormous opportunities for innovative business models.”

“But even the coverage of the current 4G network still isn’t sufficient, especially in rural areas,” he said, adding that many German businesses complain the lack of a decent signal hampers their customer service.

While the problem is particularly pronounced in the countryside, where carriers have few financial incentives to instal new transmission stations, even in the cities businesses aren't seeing the cellphone coverage they want. A survey by the chamber's Berlin branch found that only a third of companies in the capital said they were very satisfied with mobile broadband availability.

A recent review by Opensignal, an independent analytics company, ranked Germany 50th out of 100 countries for availability of the current 4G mobile broadband standard - behind India, Indonesia and Kyrgyzstan. The United States came third, behind Japan and South Korea.

Unlike carriers, who estimate their coverage based on the distance their signals are meant to travel from antennas, Opensignal looked at how much data is actually received by millions of smartphones in Germany, said the company's vice president for analysis, Ian Fogg.

“What we have is the real experience in real users at all the locations that smartphone users are spending time,” he said.

Growing demand for bandwidth also means that speeds that were acceptable a few years ago aren't sufficient for data-hungry applications such as streaming, video calls or online games, he said.

“You may have a signal," said Fogg. "The question is, is it good enough to do what you want to do?”

Volker Petendorf, a spokesman for Vodafone, said the mobile carrier is trying to close its coverage gaps, including with help from a special government fund.

He blamed lengthy approval procedures for new stations and the difficulty of finding suitable locations for the slow rollout, but said Vodafone installed or upgraded 2,300 stations in the first quarter of 2020.

Living in a mobile dead spot has one upside, according to Raeder, who runs a small museum dedicated to East German army radio technology: the lack of infrastructure means housing is affordable.

“Obviously young people who want to achieve something in life move away,” he said.

Asked whether he sees any chance the rollout of 5G might boost village life, Raeder was skeptical.

“People would be very happy if they even had 4G here,” he said.