A fast-moving Zeta weakened to a tropical storm as it barreled northeast Thursday morning after ripping through Louisiana and Mississippi where storm-weary residents were advised to stay indoors overnight while officials assessed the havoc the storm had wrought. 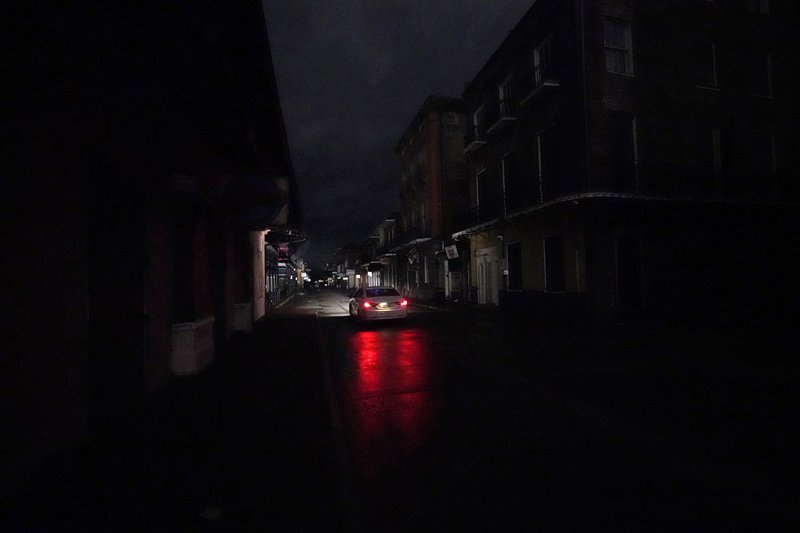 Zeta weakened over central Alabama but its strong winds continued across portions of the state and the Florida Panhandle. The storm was about 25 miles (40 kilometers) south southeast of Tuscaloosa, Alabama, with maximum sustained winds of 70 mph (112 kmh). Zeta is moving quickly toward the northeast near 31 mph (49 kmh).

The storm killed at least one person, a 55-year-old man who a Louisiana coroner said was electrocuted by a downed power line in New Orleans, and officials said life-threatening conditions would last into Thursday.

Waveland Mayor Mike Smith told WLOX-TV that his Mississippi Gulf Coast city, which was part of the area most heavily damaged by 2005's Hurricane Katrina has maybe taken the worst hit since then from Zeta.

"We're going to see a whole lot of damage in the morning," Smith said. Among the many trees blown down was one that fell on Smith's own house. "It was my next-door neighbor's and he wanted to give it to me, apparently," Smith said.

In Louisiana, Gov. John Bel Edwards was expected Thursday to tour the coastal regions hardest hit by the storm. During a radio interview Wednesday evening, Edwards said the wind had caused extensive structural damage. And as neighbors and church groups started reaching out to help those affected, he also highlighted the need to protect against the coronavirus at the same time.

"Offer the help but do it with a mask on," he said.

Much of New Orleans and the surrounding area was without power Wednesday night. The storm packed a punch as it whipped through the city. Signs outside bars and restaurants swayed back and forth in the wind and palm trees along Canal Street whipped furiously. Officials said a person was hospitalized with minor injuries after a structure collapsed.

More than 200 trees were reported down in the city. Echoing a plea made by officials across the Gulf Coast in the dark hours after the storm passed, New Orleans Mayor LaToya Cantrell implored residents to stay home and let city officials assess the damage.

Along coastal Louisiana, there were reports of some trailers flipped over, a gas station destroyed, and downed power lines and trees.

Zeta had top sustained winds of 110 mph (177 kph) as a Category 2 hurricane at landfall and is the 27th named storm of a historically busy Atlantic hurricane season — with over a month left to go. It set a new record as the 11th named storm to make landfall in the continental U.S. in a single season, well beyond the nine storms that hit in 1916.

Zeta weakened to a Category 1 hurricane with winds of 90 mph (144 kph) as it moved into southern Mississippi a few hours after landfall.

As much as 5 feet of Gulf water surrounded a casino in Biloxi, Mississippi, and deputies in Harrison County, Mississippi, received multiple calls from people who had remained in mobile homes that were threatened by winds.

In the small coastal town of Bay St. Louis in Mississippi, former mayor Les Fillingame said the storm was "very intense" when it blew through.

"It was a noisy storm. It was a truly howling wind," he said, but said thankfully it was also fast-moving. "It was a lot of wind for several hours which is enough."

Tropical storm warnings were issued as far away as southern Virginia, highly unusual for the region. Forecasters issued a string of tornado warnings for as far east as the Florida Panhandle.

New Orleans was in the warning areas of six previous storms that veered east or west this season. This time, Zeta stayed on course. Officials had been worried about the loss of a power from a turbine that helps power the city's aging drainage infrastructure and whether that would leave the city vulnerable to flooding but Zeta's swift movement meant flooding wasn't an issue.

On Tuesday, Zeta raked across Mexico's Yucatan Peninsula, toppling trees and briefly cutting power to more than 300,000 people but causing no deaths.

It then regained strength over the Gulf of Mexico along a path slightly to the east of those of Hurricane Laura, which was blamed for at least 27 deaths in Louisiana in August, and Hurricane Delta, which exacerbated Laura's damage in the same area weeks later.

The deteriorating weather prompted early voting sites to close for hours in the western Florida Panhandle. One voter in Mississippi worried about how long felled trees and debris might block roads.

"With the election I just kind of hope the city gets the roads clear by November 3rd so everybody can get out and vote," said Mackenzie Umanzor, of D'Iberville, Mississippi.

And the fact that so many of the storms have been concentrated in such a small piece of Gulf Coast real estate has meant repeated damage for some places. On Dauphin Island, Alabama, Mayor Jeff Collier said residents and workers had nearly finished cleaning up from Hurricane Sally when the wind started blowing and the water started rising yet again.

"This is going to put his back to square one again," Collier said.