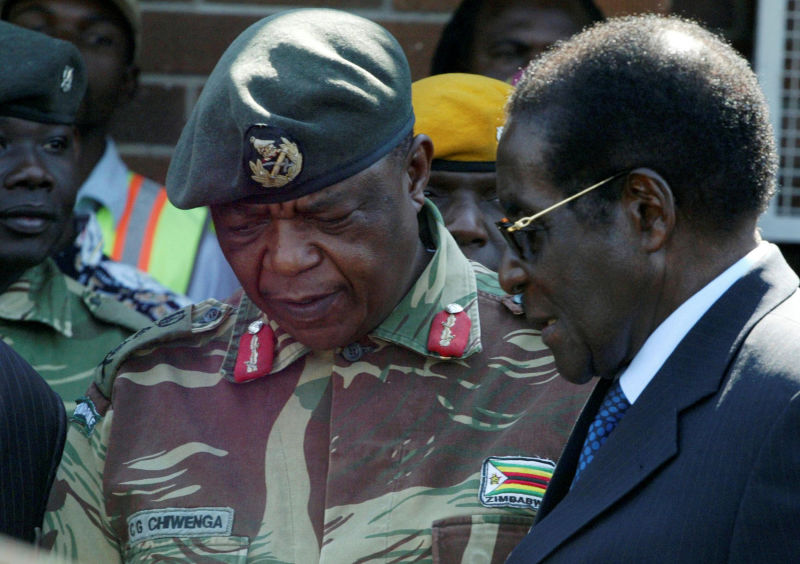 Zimbabwe Defense Forces commander Constantine Chiwenga issued a written statement, days after Mugabe fired Vice President Emmerson Mnangagwa, who was widely backed by the army and was once viewed as a potential successor to the president.

Mnangagwa's sacking opens the way for Mugabe's wife, Grace, to be named a vice president at a special conference of the ruling party, ZANU-PF, in December.

Chiwenga said "instability" in the ruling party had caused "distress, trepidation and despondence." He accused the party of expelling senior officials who participated in the 1970s war against white-minority ruled Rhodesia, saying "counter revolutionaries" are plotting to destroy the party.

First lady Grace Mugabe is known as a leader of a group of party officials known as the Generation 40 or G40 because many of them are in their 40s and 50s and are too young to have participated in Zimbabwe's independence war. The faction has reportedly in the past week drawn up a list of dozens of top party officials whom they want expelled or suspended from the party.

"The current purging and cleansing process in ZANU-PF which so far is targeting mostly members associated with our liberation history is a serious cause for concern for us in the defense forces," said Chiwenga, at a press conference, reading from his statement. "We must remind those behind the current treacherous shenanigans that when it comes to matters of protecting our revolution, the military will not hesitate to step in. The current purging of which is clearly targeting members of the party with a liberation background must stop forthwith."

This is the first time Zimbabwe's military has directly criticized the infighting in ZANU-PF and marks a rift between Mugabe and an institution that has been a key pillar of his power.

Chiwenga did not state what action the military would take but said the defense forces "strongly urge the party to stop the reckless utterances by politicians from the ruling party denigrating the military which is causing alarm and despondency within the rank and file."

Grace Mugabe has previously criticized Chiwenga for allegedly using Mugabe's name to handpick a war veterans' leader, Chris Mutsvangwa, who has become a vocal critic of the president and a supporter of the fired vice president.

Mugabe has also in the past warned military commanders from interfering in ZANU-PF succession politics.

"Politics shall always lead the gun and not the gun politics. Otherwise it will be a coup," Mugabe told his supporters in July amid speculation at that time the military supported Mnangagwa to take over from him.

Mugabe and ZANU-PF have ruled this once prosperous but now economically troubled southern African country since independence from white minority rule in 1980. Most of the military commanders participated in the independence war.