WORLD Zimbabwe faces its worst economic crisis in a decade

Zimbabwe faces its worst economic crisis in a decade

HARARE, Zimbabwe (AP) — As Zimbabwe plunges into its worst economic crisis in a decade, gas lines are snaking for hours, prices are spiking and residents goggle as the new government insists that the country — somehow — has risen to middle-income status. 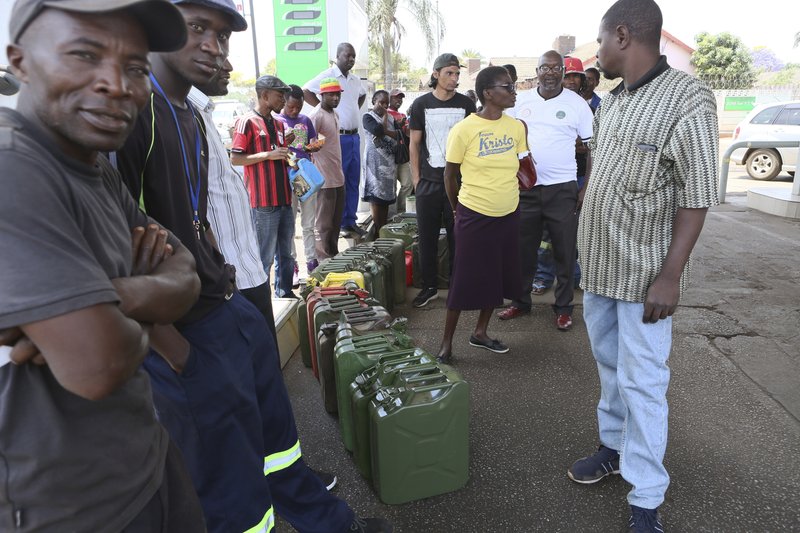 Motorists wait to fill up their containers at a fuel station in Harare, Tuesday, Oct, 9, 2018. As Zimbabwe plunges into its worst economic crisis in a decade, gas lines are snaking for hours, prices are spiking and residents goggle as the new government insists that the country somehow has risen to middle income status. (Photo: AP)

After ousting the repressive Robert Mugabe almost a year ago following more than three decades in power, and peacefully electing President Emmerson Mnangagwa in July, many hoped the country would emerge from turmoil and return to prosperity.

Instead, it appears to be imploding in the days since the new finance minister announced a "stabilization program." Over the weekend long lines for fuel reappeared, sometimes stretching for several kilometers.

"You ask what the queue is for later. The important thing is to get in the queue, there might be something there," said Yvet Mlambo, a resident of the capital, Harare.

Basic items such as bottled water are now being rationed, even as the capital faces a cholera epidemic that has killed more than 40 people and spread into the countryside.

Even beer is rationed, to some outrage.

"At least allow us to drink. How else can we drown our sorrows?" one man shouted as he stared at a notice limiting customers to two beers per purchase. Drinkers have formed WhatsApp groups to share tips on where favorite brands can be found.

More worryingly, drugs are in short supply in a country where the health system has long been on the brink of collapse.

Outside a pharmacy, Bridget Chikwimba shook her head. "I bought these same allergy pills for a dollar last week, today they are $13," she told The Associated Press. "I waited five minutes while they calculated the new price."

The country's Retail Pharmacists Association describes the shortages of medicines as "severe."

Many fear the current crisis, induced by foreign currency shortages and a ballooning debt, could spiral into the kind of collapse seen a decade ago when Zimbabwe's hyperinflation reached 500 billion percent, according to the International Monetary Fund.

Plastic bags of 100-trillion Zimbabwe dollar banknotes were not enough to buy basic groceries, forcing Mugabe to form a "unity government" with the opposition and adopt a multi-currency system.

Since then, daily transactions have been dominated by the US dollar. But the new currency shortage has forced most people to use a surrogate currency called bond notes, bank cards and mobile money, all of which are devaluing quickly against the US dollar on the black market.

Retailers said the soaring rates for US dollars on the black market, where they source most of their foreign currency, are making it difficult for them to restock. Some businesses have been forced to close.

"The parallel market is unsustainably high and has decimated confidence. Prices have been going up while margins are eroded," Denford Mutashu, president of the Retailers Association of Zimbabwe, told the AP.

In the days leading to the implosion, new Finance Minister Mthuli Ncube, a former lecturer at the London School of Economics, announced the "stabilization program" that included commitments to cut borrowing. He also plans to cut government spending, repay foreign loans to unlock fresh credit and expand the revenue base.

On Friday, Ncube surprised many by announcing that after rebasing the gross domestic product and taking into account the large informal sector, Zimbabwe is now a middle-income economy.

"Our economy is bigger than we think," he told reporters but warned of "pain" to achieve desired growth. "At the end, we will be glad."

But Zimbabweans have reacted angrily to one of the new measures, a tax on transactions conducted with mobile money and bank cards. Labor unions and others say the poor, without access to US dollars and largely reliant on electronic transfers, will be hardest hit.

Protests have erupted, and more are planned this week, as people say they can't endure the economic pain any longer.

The crisis could lead to social unrest unless a political settlement is reached between the ruling ZANU-PF party and the opposition, which narrowly lost the presidential election and unsuccessfully challenged the results in court, said Harare-based political analyst Alexander Rusero.

"ZANU-PF should swallow its pride to realize that they desperately need the opposition for the way forward," Rusero said.

Both parties are instead playing hardball despite efforts by churches and others to bring them into negotiations.

Meanwhile, the popularity of the new president, who was cheered by thousands for replacing Mugabe, is dropping. Once-popular campaign slogans are being mocked.

The road to a more secure future in Zimbabwe is "long, winding and at times bumpy," Mnangagwa replied in a statement posted on Twitter this week. "But there is no other way."