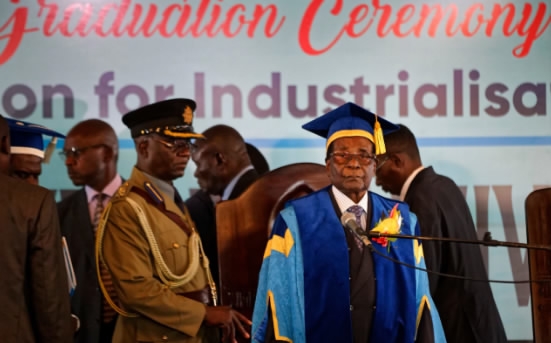 In one of the latest developments in Zimbabwe following the military's seizure of power Tuesday night and the climate of deep uncertainty, the Zimbabwe Defense Forces (ZDF) claimed Friday it had made significant progress in targeting the "criminals" around President Robert Mugabe.

"Significant progress has been made...to weed out  criminals around President Mugabe," it said in a statement, adding that some people have been arrested in the course of the operation.

The statement added that the military is engaging with Mugabe, who is also constitutionally commander-in-chief of the defence forces, "on the way forward" and will advise the nation of the outcome as soon as possible.

The ZDF asked Zimbabweans to remain patient during the operation, which came after Mugabe last week fired Vice President Emmerson Mnangagwa, who was also deputy chief of the ruling Zimbabwe African National Union-Patriotic Front, for alleged disloyalty and deceit. Mnangagwa had been Mugabe's political ally for more than 40 years.

The state-controlled Herald newspaper on Thursday and Friday published photographs of the 93-year-old Mugabe meeting with ZDF chief Constantino Chiwenga and special envoys for mediation sent by South African President Jacob Zuma in his capacity as chair of the Southern African Development Community (SADC), without giving details of the meeting.

Nhamo Mhiripiri, a professor with Media and Society Studies Department at Midlands State University, said it was too early to expect progress from the negotiations.

With anxiety gripping Zimbabwe, Mhiripiri feared the chaos could turn violent like it had in some Arab countries in the past.

The army's move has not caused any bloodshed so far, which should be maintained, he added.

Mugabe Friday made his first public appearance since the military takeover, attending a graduation ceremony at the Zimbabwe Open University. He was reported to have been put under house arrest since Tuesday. Media reports said he will attend a similar ceremony at the Midlands State University next week.

Tsvangirai urged Mugabe to resign and pave the way for democratic elections. "In the interest of the people, Mr. Robert Mugabe must resign and step down immediately," he said at a press conference.

United Nations Secretary-General Antonio Guterres on Thursday called for calm and peace in Zimbabwe, joining such regional organizations as the SADC and the African Union, and other countries in urging a peaceful solution.

"The secretary-general is closely following developments in Zimbabwe and calls for continued calm. He underlines the importance of resolving political differences through peaceful means, including through dialogue and in conformity with the country's constitution," Guterres' spokesperson Stephane Dujarric said.

The secretary-general also welcomed SADC efforts to facilitate a peaceful solution to the situation in Zimbabwe.

Foreign ministers from current member states of the SADC leadership, including the SADC Organ Troika Angola, Tanzania and Zambia, and the SADC Council presidency South Africa, met Thursday at the SADC headquarters in Gaborone, Botswana, and recommended a SADC special emergency summit on Zimbabwe's situation.